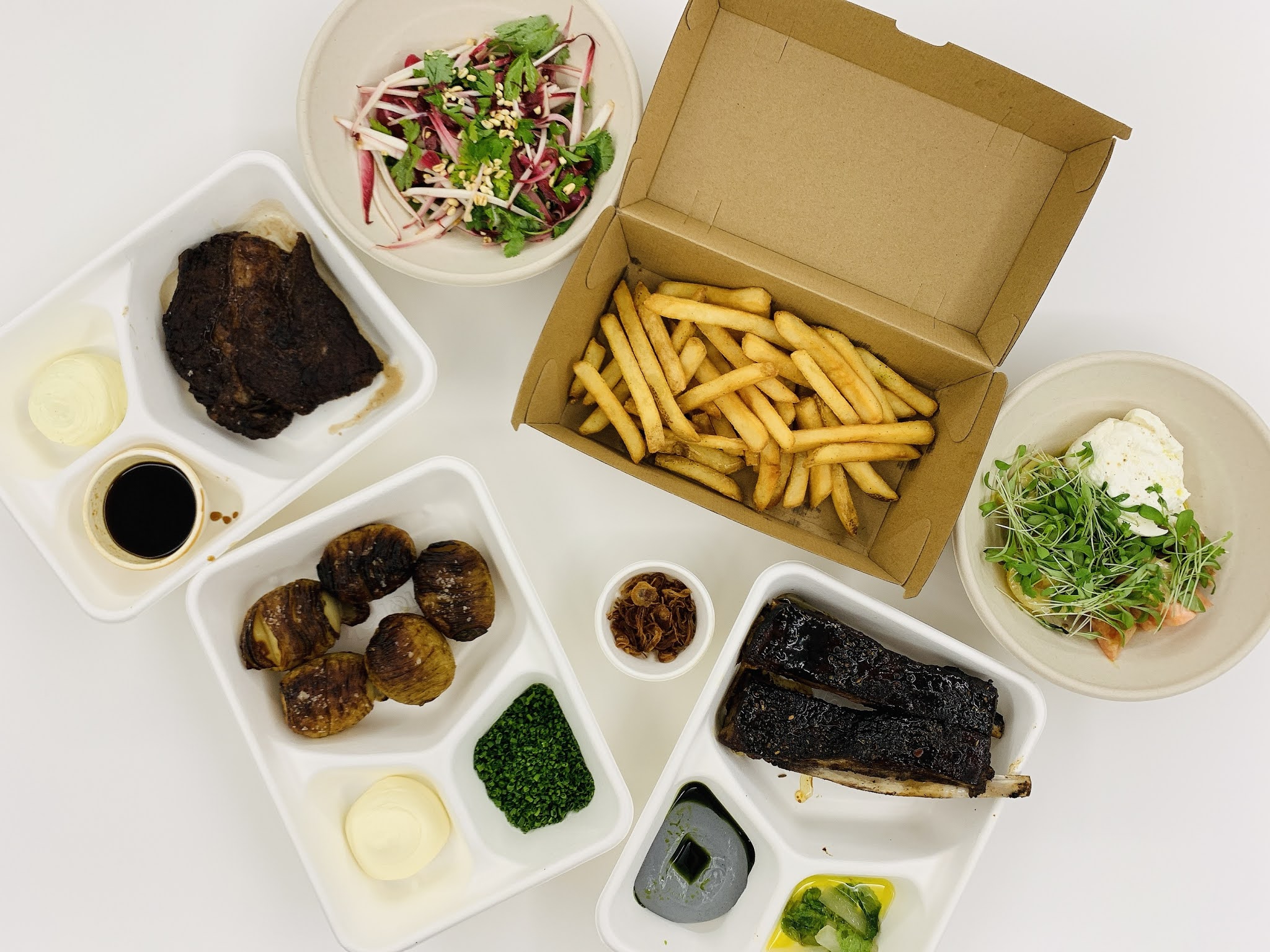 While stricter measures to contain the spread of COVID-19 within the community have banned all food-and-beverage (F&B) establishments, including hawker centres and coffee shops, many of our restaurants are introducing innovative ways to bring the restaurant experience or at least the taste of it to our homes.
One of them is Cheek Bistro, the younger and less serious sibling of the now defunct one-Michelin starred Cheek by Jowl. Led by chef Rishi Naleendra and general manager Manuela Toniolo, this restaurant is known for its continually-evolving menu and the use of sustainable ingredients. Despite the menu overhaul with the exception of fresh oysters, it now serves creative modern Australian fare that marries fresh, eclectic flavours of the land Down Under with the comforting, hearty notes of bistro cooking. Diners can now enjoy it in a more casual way as small and large sharing palates are favoured over tasting menus.
Why the move from fine-dining to casual bistro dining concept? The popularity of bistronomy (a portmanteau of the words bistro and gastronomy) has brought new life to gastronomy. This culinary trend was popularised in the 1990s by French Chef Yves Camdeborde who wanted to making haute cuisine more accessible to the masses. He did so by creating haute dishes that were served in a relaxed, pleasant and welcoming atmosphere similar to bistros and at a fraction of the price of similar dishes at a Michelin-starred establishment. It is even more a vital part of Singapore's vibrant F&B landscape, where food lovers continues to crave for unique dining experiences without burning a hole in their pockets.
When conceptualising Cheek by Jowl, chef Naleendran did not want to put any Sri Lankan touches to his food when he started this restaurant He went with modern Australian food because he knows what he felt people would accept. Although the name has been changed to Cheek but it is still very much a Cheek by Jowl affair to this newly revamped bistro by this couple-led restaurant.  While the name doesn't come with a Michelin star anymore, it continues to win to win fans with its creative Australian dishes served in chic, yet casual setting.
The current kitchen team led by head chef Jay Teo will continue running the operations. Chef Naleendra's wife and closest collaborator, Manuela Toniolo, is behind the restaurant's wine list which consists of more than 80 labels sourced from all over the world. While diners can decide on their choice of tipple, Toniolo and her team offer excellent recommendations. 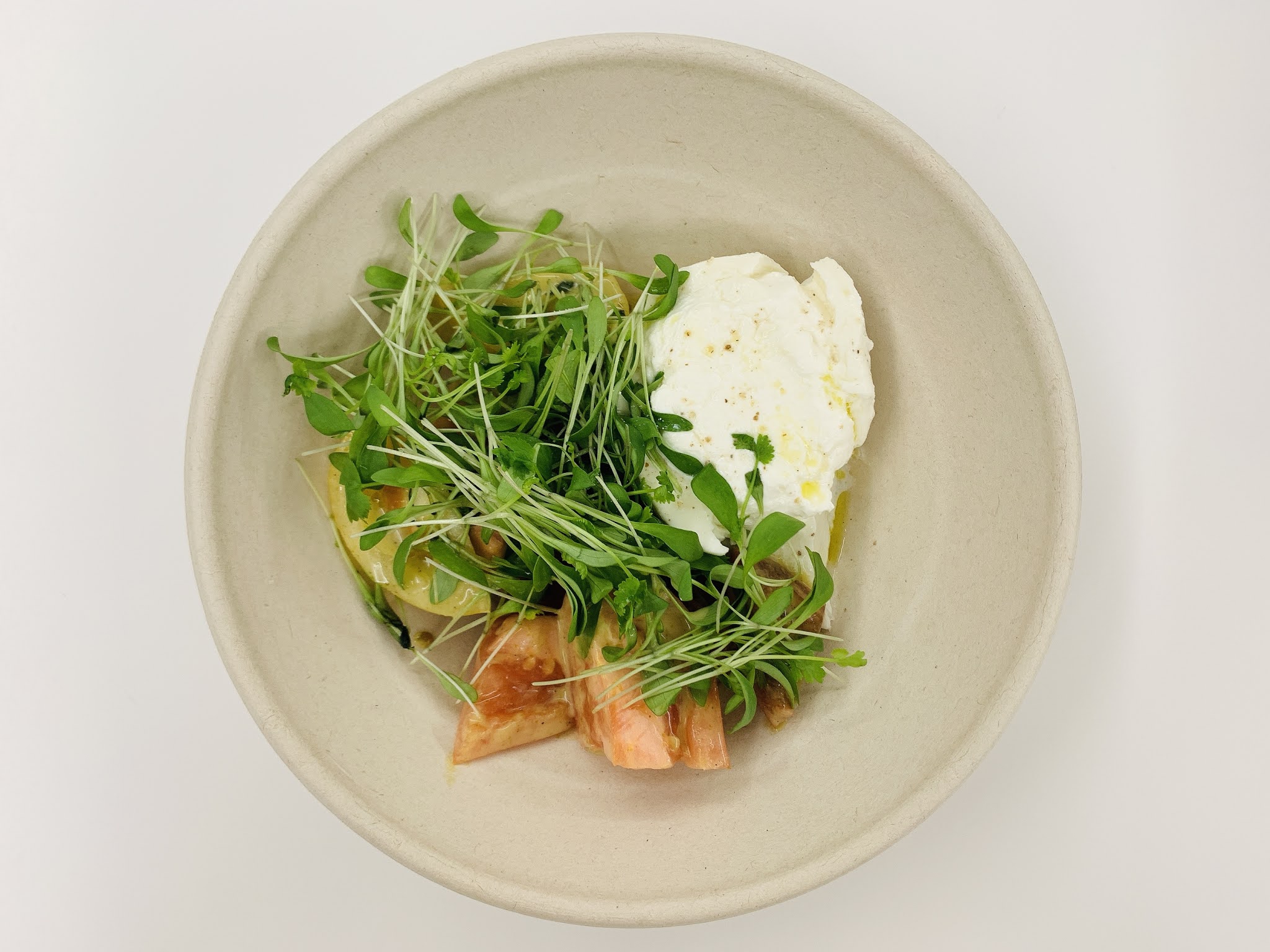 One of the must-have dishes at Cheek Bistro is the classic pairing of Burrata and heirloom tomatoes ($26).  At Cheek Bistro, the burrata adopts a fun East-meets-West approach that is accented with citrusy fermented chilli spiced with cumin, flecks of crispy shallots and drizzled with lemon juice. (Food rating: 4/5) 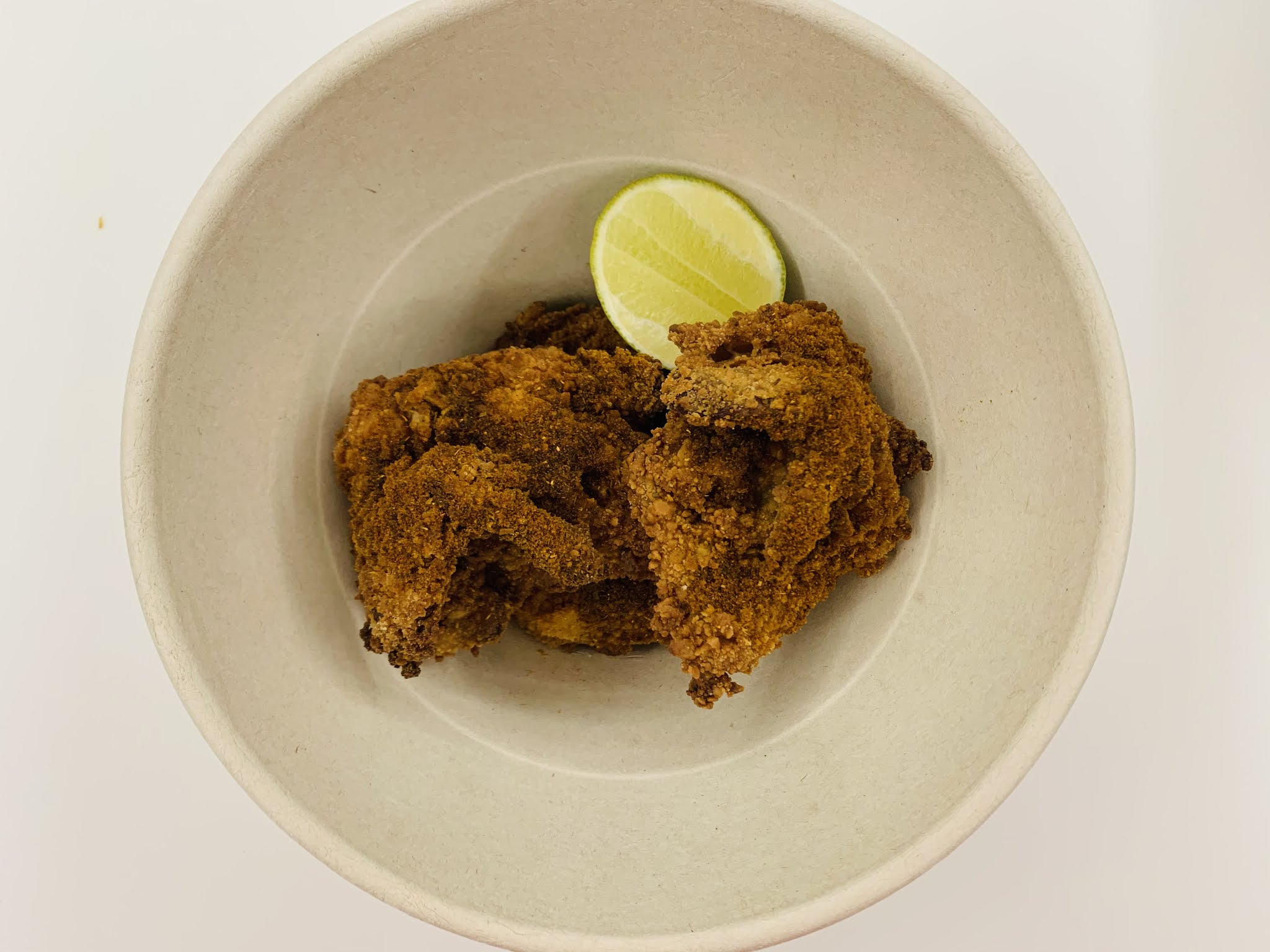 Known more for its eggs than its meat, this innocuous-looking bird was full of flavour. This wild birds, whose gamy flavours are hard to take for people who are not used to it. The Buttermilk Quail were beautifully battered with generous flavourful spices served with Sriracha mayo, made of a chilli peppers, distilled vinegar, garlic, sugar and salt and drizzled with lime ($26). What's suprising is the fact that this dish did not taste gamey at all. It has a nice texture like duck meat. The drizzled fried quail dipped in Sriracha mayo gave the added complexity. (Food rating: 4/5) 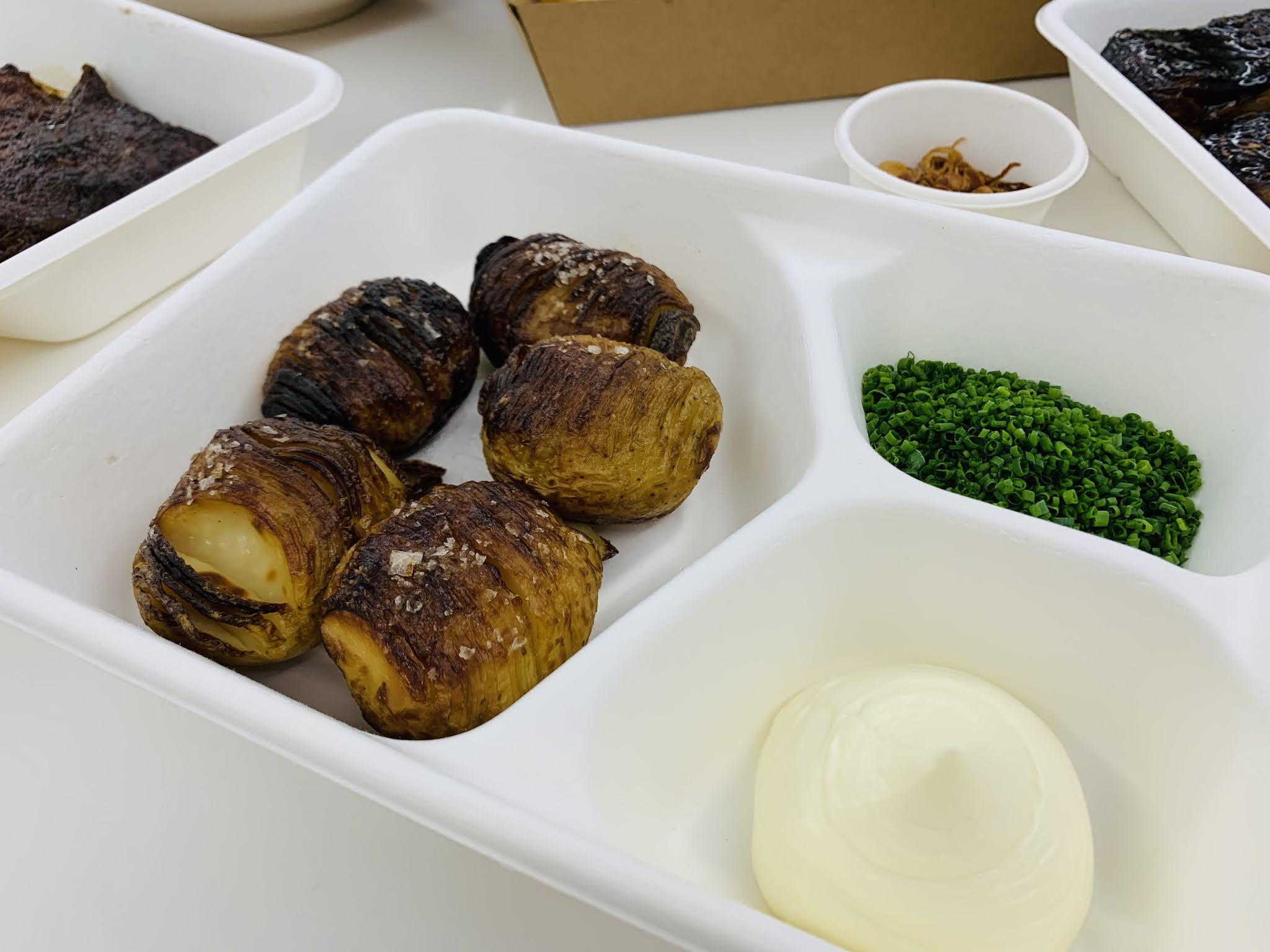 Originated from the Swedish word Hasselbacken, the Hasselback potatoes were first served at a Stockholm restaurant. It is known for its crispy on the outside and tender soft on the inside. The baked potatoes are sliced similar to potato chips, but slices are still attached to the base. Served with a truckload of sour cream and finely-chopped chives, this combination is heavenly. These Hasselback Potatoes ($16) is highly recommended as you don't know what you are missing. A simple curated potato dish could make diners go gaga. (Food rating: 5/5) 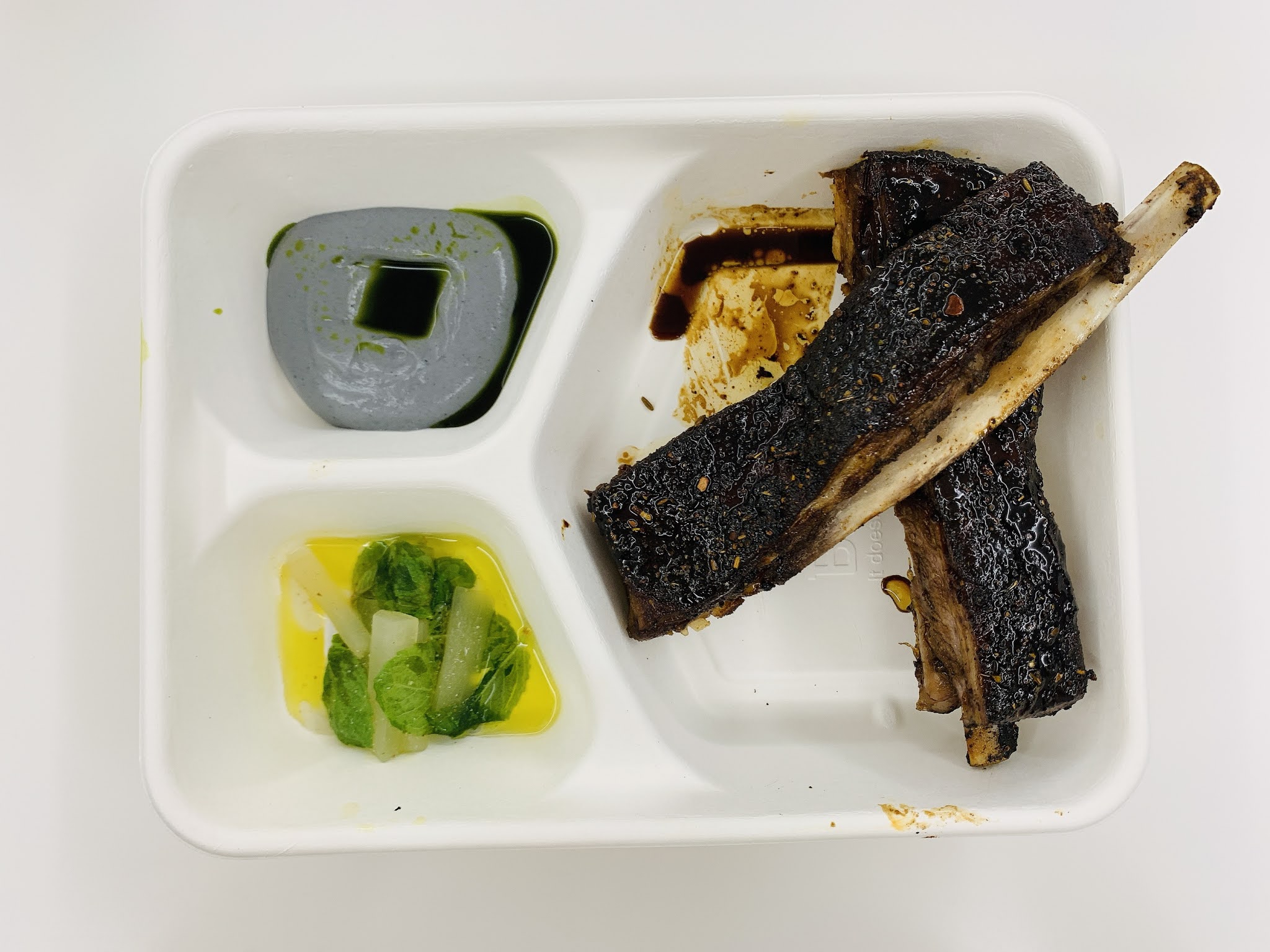 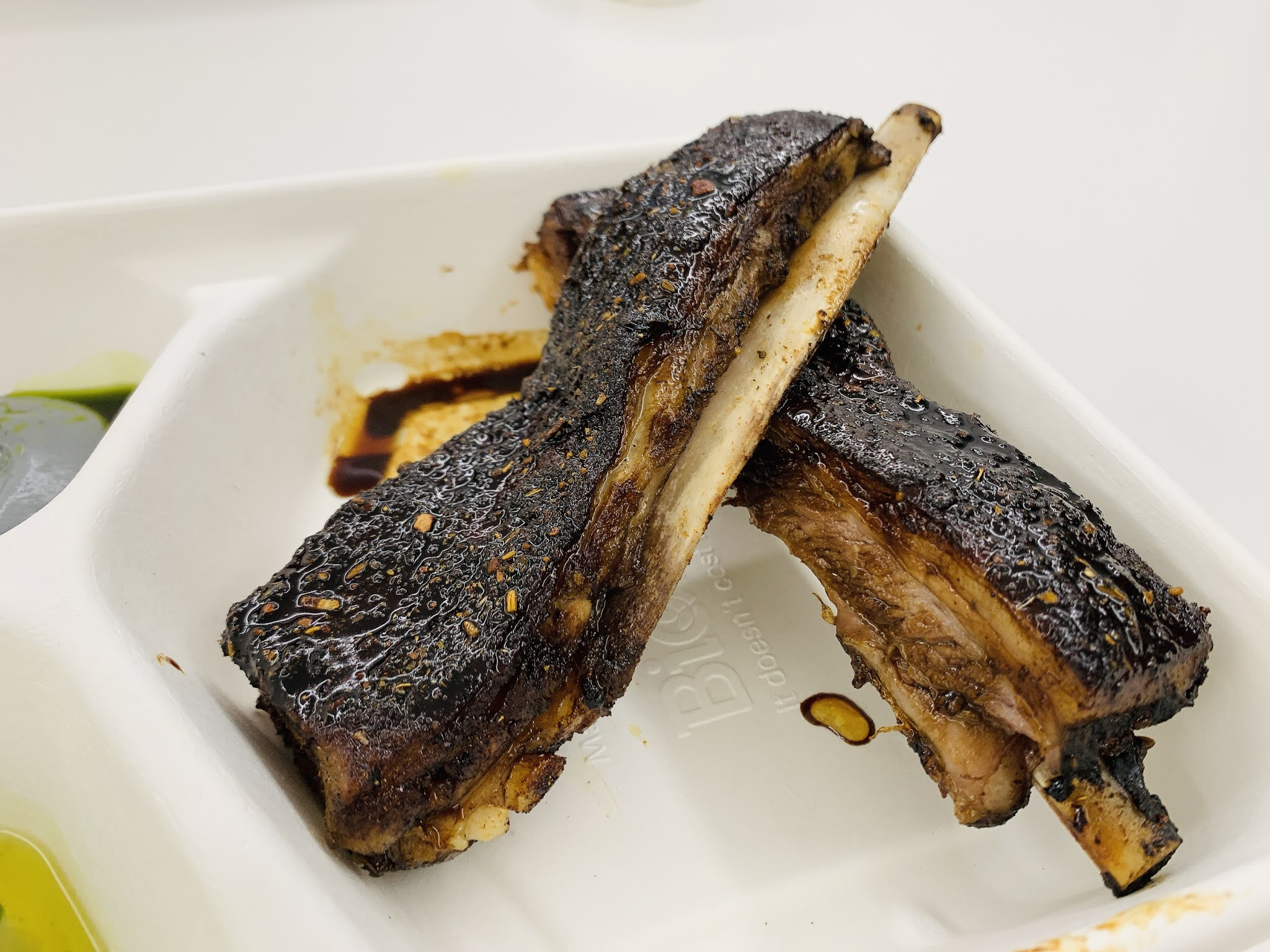 Influenced by Greek/Mediterranean cuisine, the Lamb Ribs ($32) is served with mezze-like accompaniments like the the smoky eggplant puree with a blob of mint oil for accent. The sticky, pull-apart tender fat-laden lamb ribs with a satisfying charred crust charm you as they gnaw off every bit of meat you can. (Food rating: 5/5) 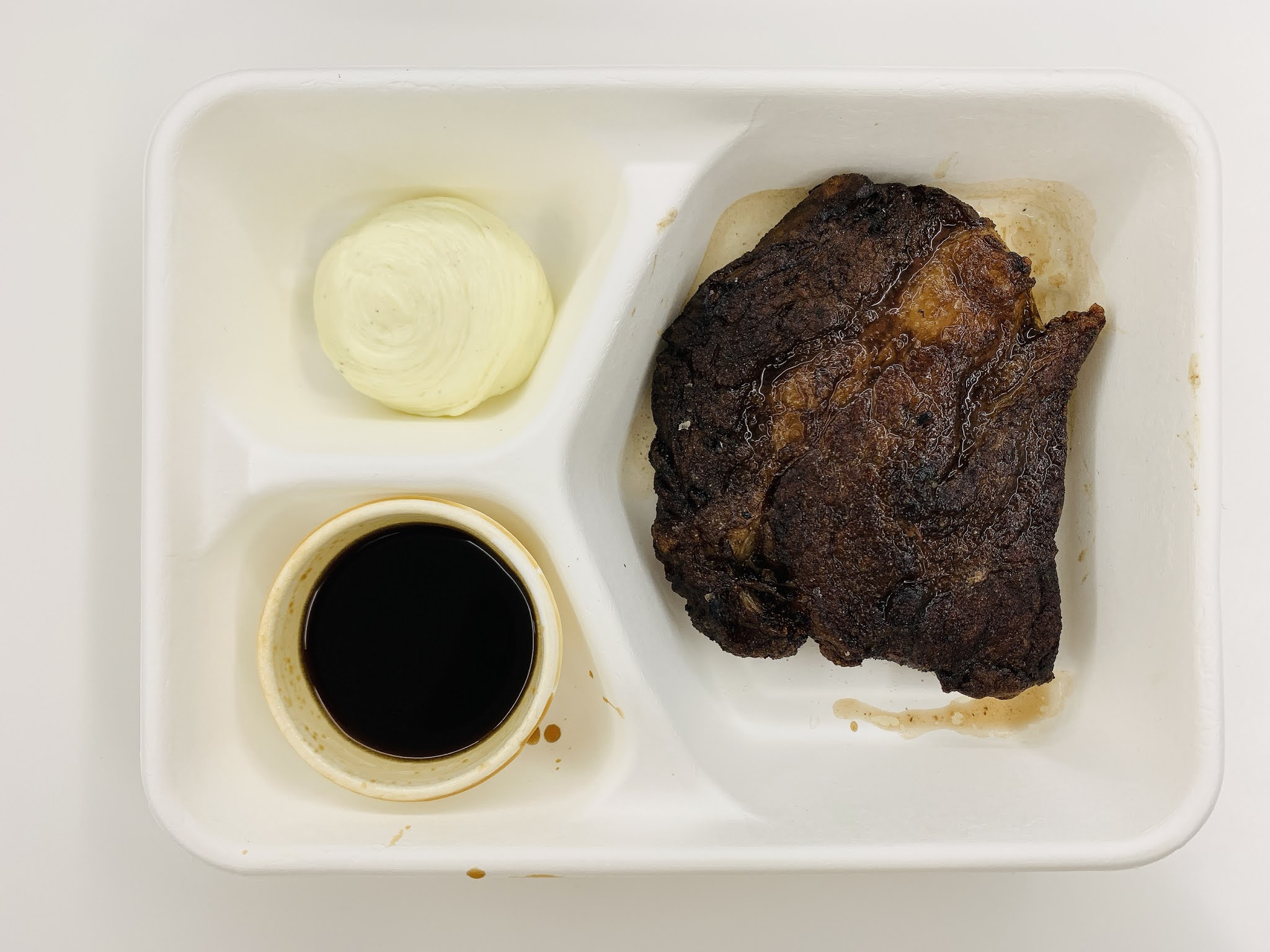 The most expensive dish in the menu, the 230g Steak Fries ($44) Rib Eye arrives fiercely charred on the outside and perfectly medium on the inside, offering equal mouthfuls of tender juicy meat. Using the East-meets-West approach, this Steak is accompanied by fermented soy and wasabi sour cream dip, giving the heat from the wasabi and tang from the sour cream. (Food rating: 5/5) 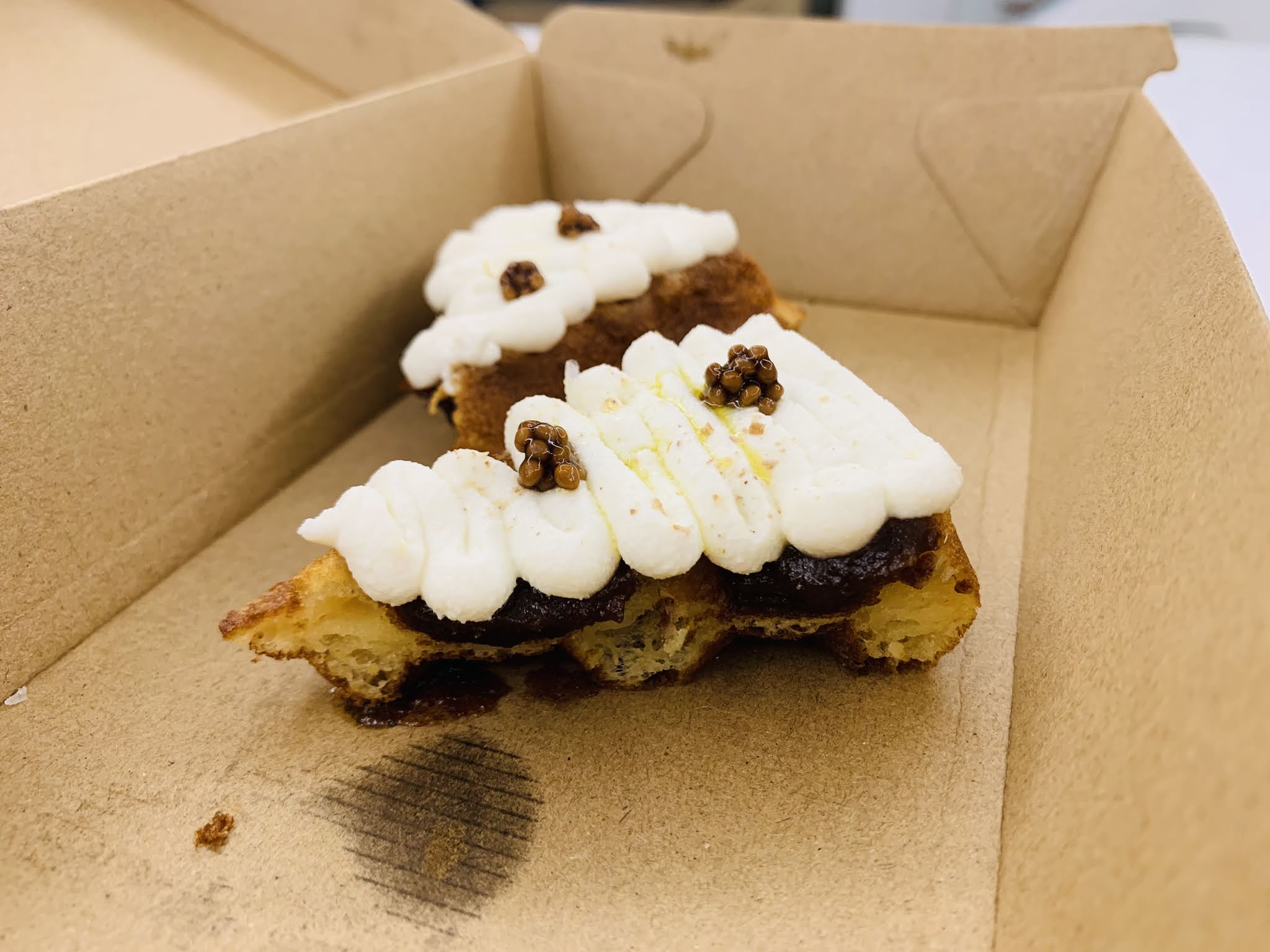 These crispy fluffy buttermilk waffles ($11) get their own standing as snacks. They are served in wedges with a choice of piped chicken liver parfait or ricotta cheese, both paired up with date jam and pickled mustard seeds. For Waffle with Whipped Ricotta served with date jam and picked mustard. The smooth whipped ricotta cheese with creamy mild taste is perfect with this sweet dish. (Food rating: 3.5/5) 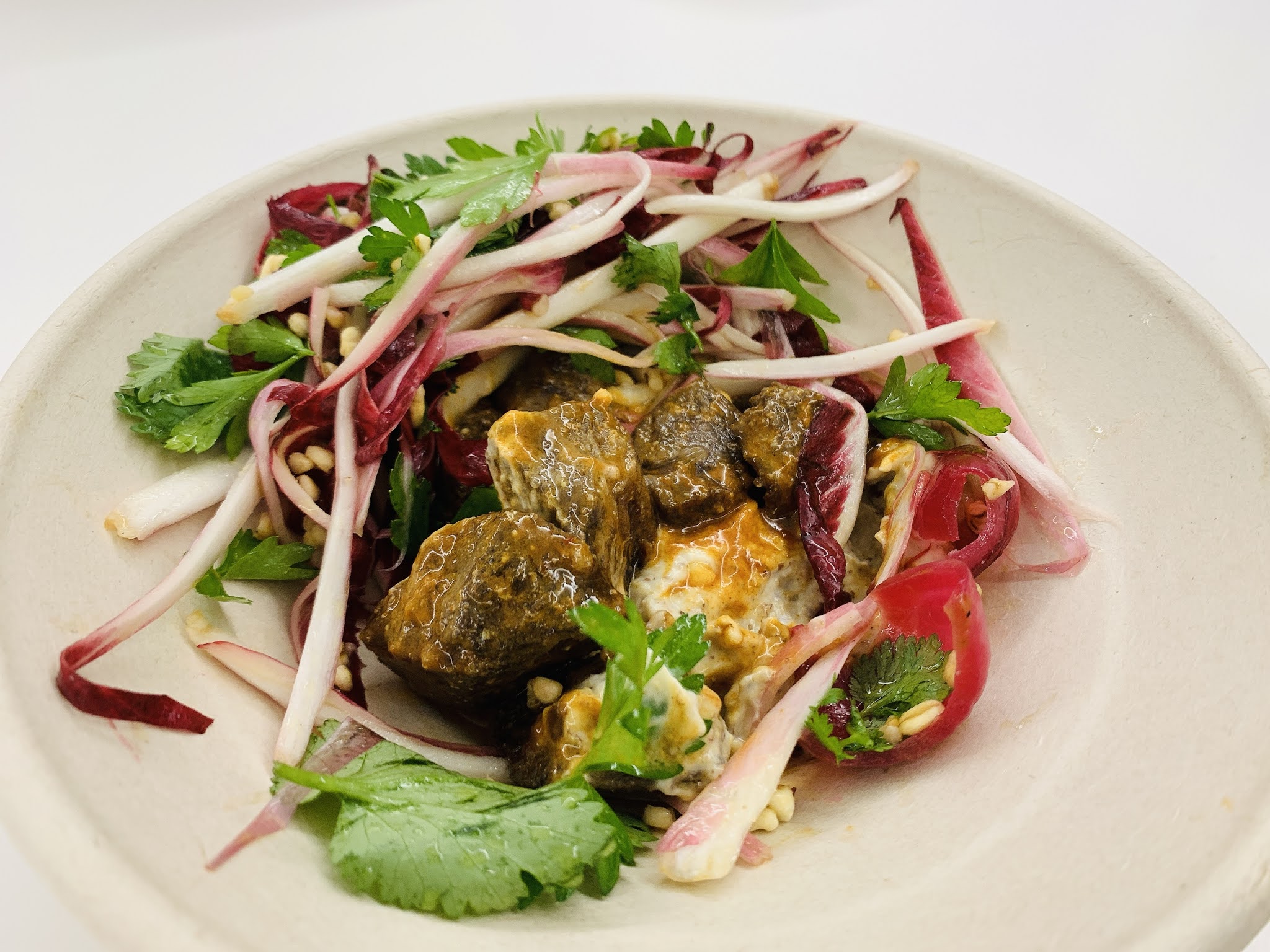 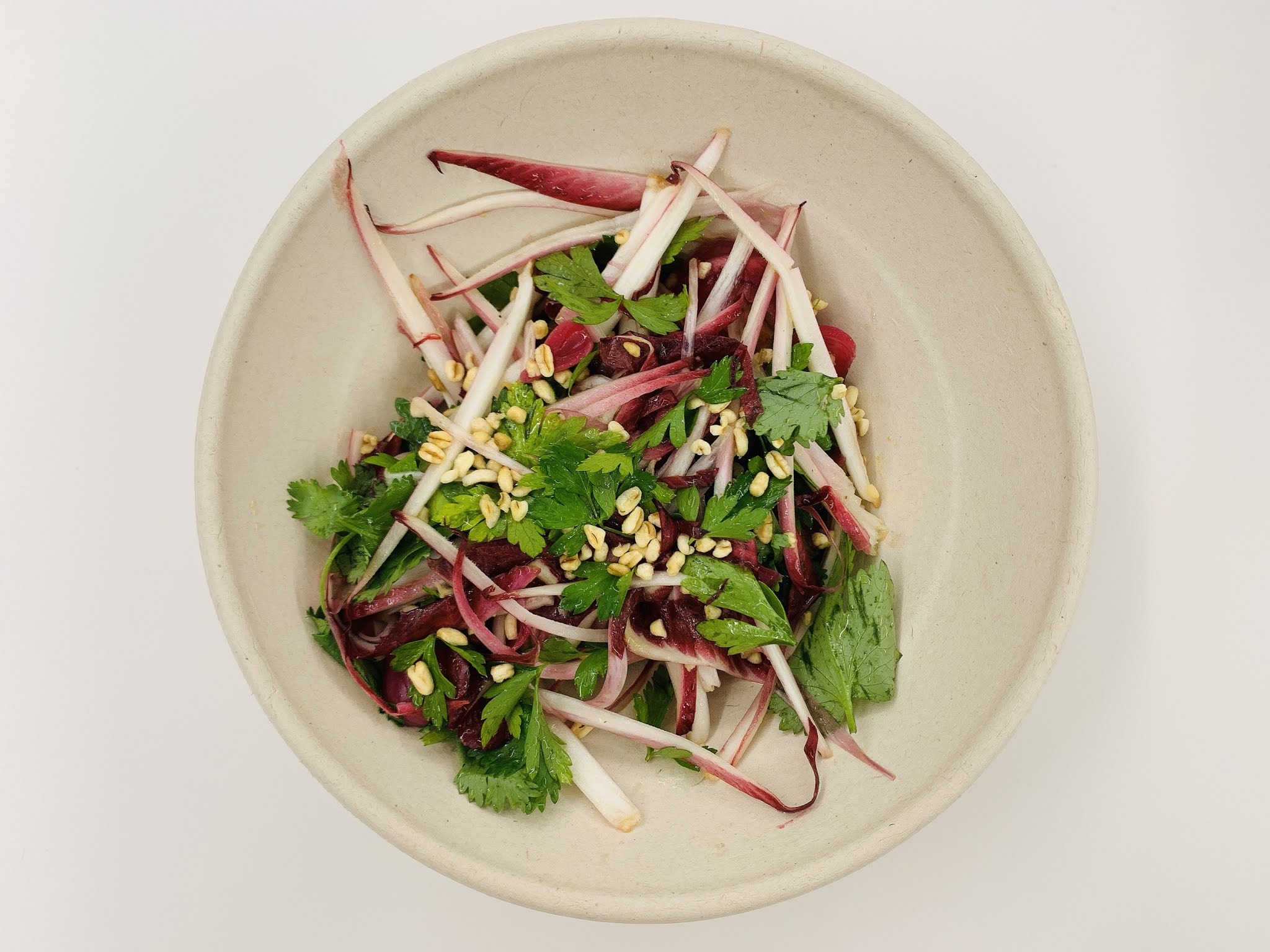 The Beef Cheek ($28) is deliciously charred on the outside and tender on the inside. A mustard dressing made in pommery style lends the beef a punch of piquant mustard flavour - intense and vinegary with an almost sweet flavour, while the radicchio and herb salad rounds the dish with a sharp earthiness. (Food rating: 4/5)
About chef Rishi Naleendran
Chef Naleendran's cuisine is an expression of eclectic flavours from all over the word. His impressive culinary career includes stints as Chef de Partie at the world-renowned Tetsuya's in Sydney, where he developed a fastidious attention to detail, and Pastry Chef at the award-winning Yellow by Brent Savage, whom Rishi values as a mentor whose guidance was instrumental in helping him hone his skills. Born in a family of food professionals, recounts his journey from part-time kitchen hand, cleaning dishes to fund his university education, to becoming the first Sri Lankan to be awarded a Michelin star. Chef Naleendran owns three restaurants - Cheek Bistro, Cloudstreet and the latest Kotuwa, a Sri Lankan restaurant.
Address: 21 Boon Tat St, Singapore 069620
Price: $$
Food Rating: 4.8/5
Recommended dishes: Lamb Ribs, Steak Fries, Hasselback Potatoes, Burrata and Heirloom Tomatoes
$$ Cheek Bistro Cuisine - Australian Hasselback Potatoes home delivery in Singapore home_delivery Lamb michelin MRT: Telok Ayer Quail Ribeye Steak Rishi Naleendran waffles Western
Location: 21 Boon Tat St, Singapore 069620