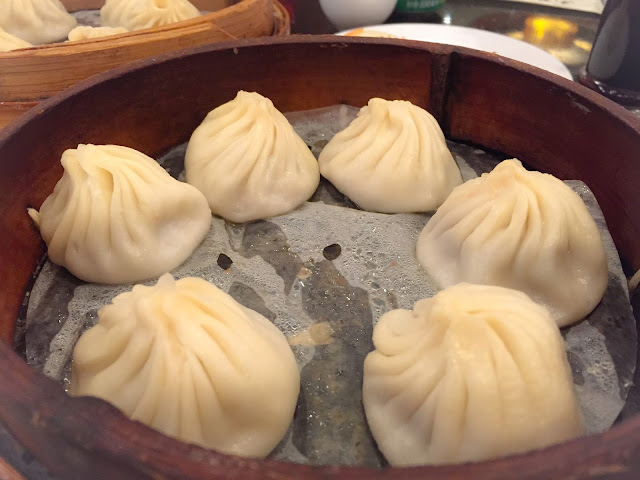 One of the famous steamed dumplings restaurant in Shanghai, Nanxiang Steamed Bun Restaurant [南翔馒头店] originates from Yuyuan Gardens. Located in a three-storey building, the restaurant offers different service levels at different price levels.
For service, at the first level, the restaurant sells steamed buns (小笼包) for takeaways only. No seats. Self-service. At the second floor, diners can enjoy partial self-serve with seats. Diners have to first find their own seats, and then order food and make payment at the cashier counter. Diners will be provided with coloured tokens which represent the different foods. The staff come with a trolley of foods and serve the food by looking at the tokens. At the third floor, it is perceived as the premium floor where diners will be ushered to a table and served by the restaurant service staff.
For price, at the first level, the restaurant sells one serving of 16 steamed buns at RMB12 whereas one serving of 6 steamed buns sells at RMB25 at the second floor. At the premium floor, the same serving of 6 steamed buns are sold at RMB35. The quality of these steamed buns are the same but they were priced differently for diners who are willing to pay differently. Thus, maximising their profits.
We visited Nanxiang twice and tried dining at the second and third floors.
At the third or premium floor, we were ushered to our table and attended by the restaurant staff. The premium floor was fully air-conditioned and the interior was clean and cosy. We ordered a couple of their popular dishes and spent a total of RMB260. 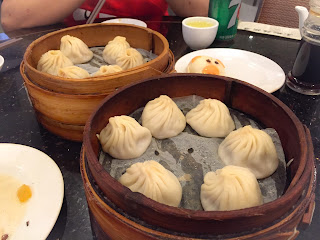 Steamed Bun with Crab Roe and Pork Fillings [招牌蟹黄小笼包] is the of the signature dishes at Nanxiang. These steamed buns, which were priced at RMB55 for a serving of 6, delightful. The broth in the steamed bun was sweet with a nice aroma. The skin was slightly thicker than Din Tai Fung's steamed buns, but they were  chewy and enjoyable. (Food rating: 4/5) 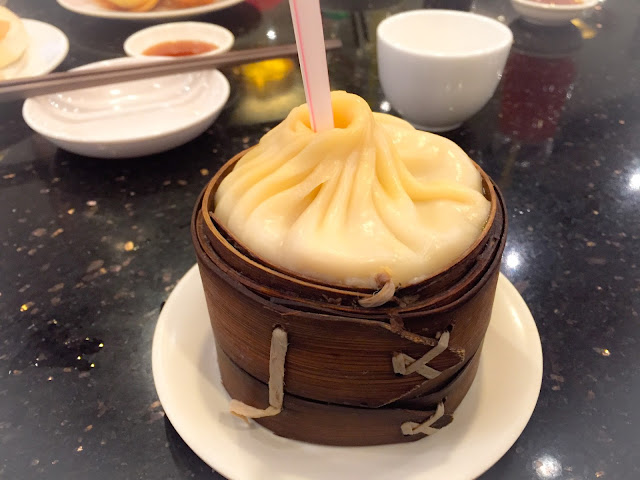 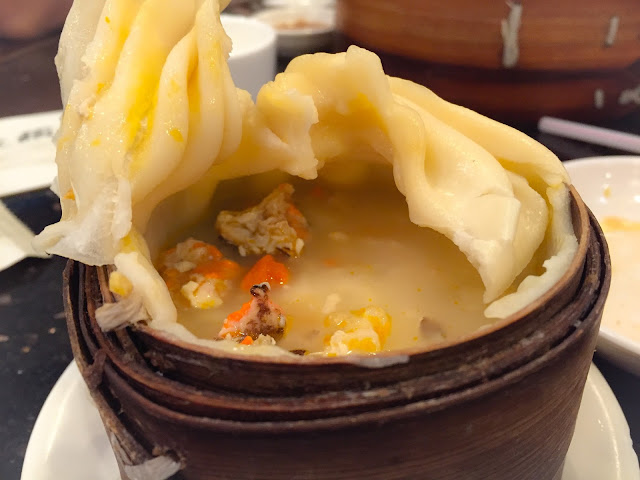 Unlike the steamed buns introduced earlier, this steamed bun was at least four times larger in size. Instead of eating the entire bun, this was only meant for drinking the crab roe soup. The crab roe soup was salty and had a rich crab roe aftertaste.There were small chunks of crab roe and meat in the bun. The skin was not meant for eating but was used as a vessel for the soup. For those who do not know would eat the thick and highly chewy bun. Texturally, it felt like thick rubber toy. (Food rating: 2.5/5) 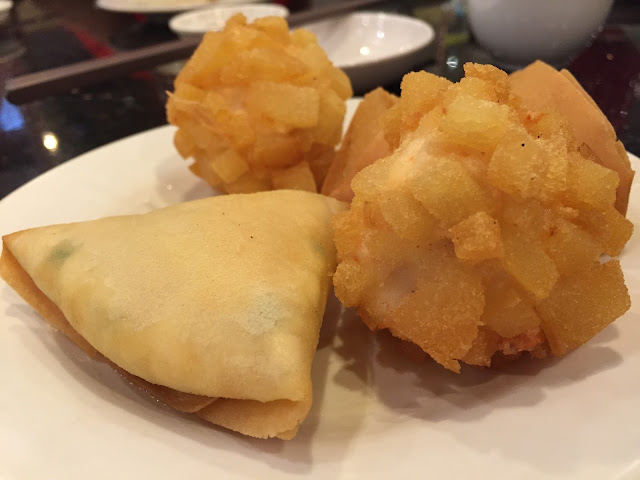 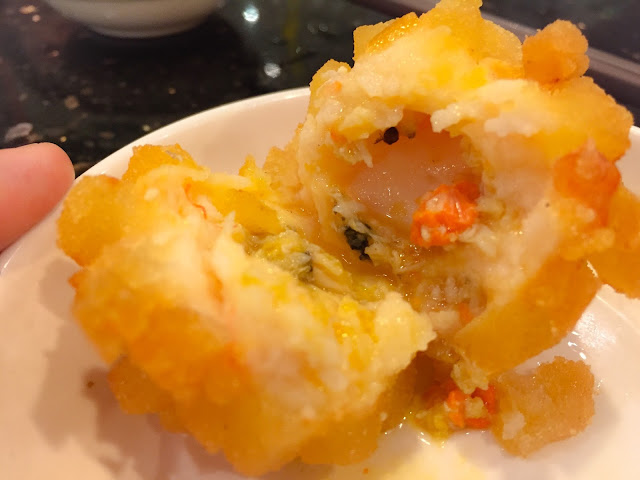 The shrimp ball was deep fried into golden brown colour. When bitten into half, crab roe broth seeped out from the ball. The crab roe was wrapped with shrimp paste, and then covered by bread cubes. Each layer of the shrimp ball gave different experience - crispy, chewy and sweet savoury. However, the ball was greasy, making one queasy quickly. (Food rating: 2.5/5) 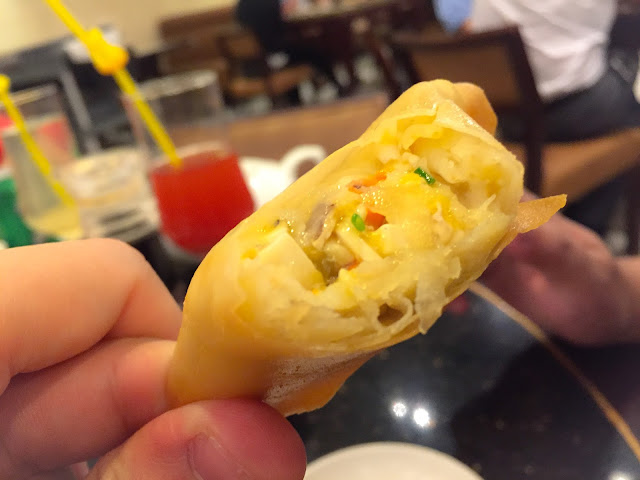 The samosa with crab roe, tofu and shrimp fillings were delightful. the thin wanton skin were deep fried into beautiful golden colour with the fillings remained moist and savoury. (Food rating:3/5) 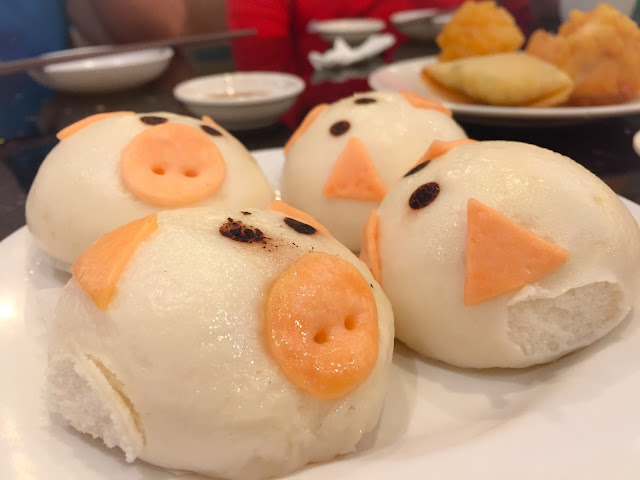 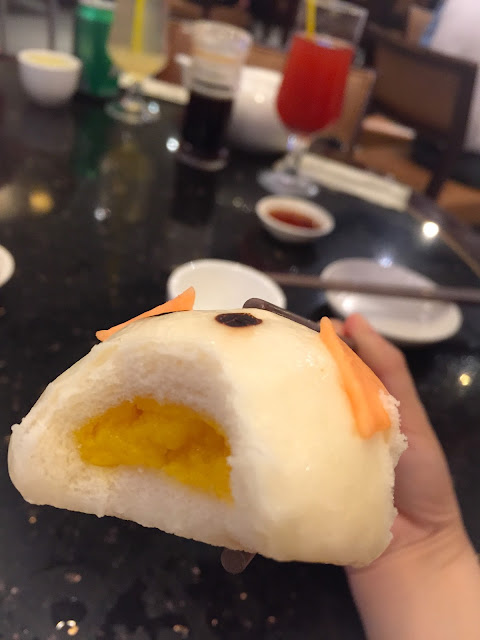 Popular in most dim sum restaurants, the steamed bun with creamy custard fillings were extremely delicious, especially when it was runny. However, it was different at Nanxiang. The custard was partial dry just like a hard boiled egg. The taste was somewhat similar as the Hong Kong style. (Food rating: 2.5/5)