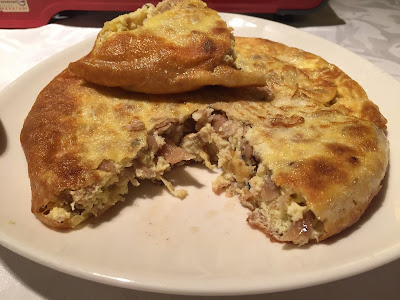 You would miss the delicious snack foods sold at the night markets such as sausage wrapped in glutinous rice (大腸包小腸), braised 'mee sua' with oysters (蚵仔面线), Taiwan-style rice with soy sauce lean pork (卤肉饭), if you have ever visited Taiwan.

We decided to go for a food sampling session at Shin Yeh at Liang Court Shopping Centre. We were greeted by friendly staff and were ushered to our table. It was a beautiful setting and I regretted for not taking a picture of the restaurant. The restaurant was overlooking the Singapore River.

We ordered a variety of foods and were looking forward to try the Taiwanese snack foods. Disappointed, we were told that the snack foods were no longer available at this restaurant. I just realised that there was another bistro outlet at Square 2 when I searched more about the restaurant prior to publishing this post.

So, how much did we spend at this fine Taiwanese cuisine restaurant? We had a 8-course dinner, excluding the fruit juices and appetiser that amounted to about SGD170 for two persons. Perhaps I was more looking forward for the local snacks than fine dining, I find the food was normal. They were either localised or no different from any other Chinese foods around the world. They tasted so much the same. Do share if I am wrong. 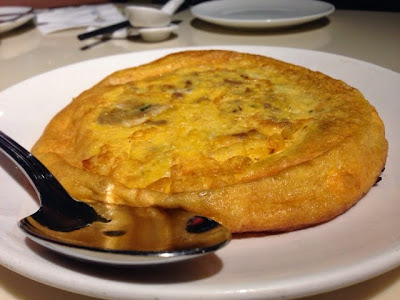 Pan-fried Chay-Po Egg Omelette (正宗菜脯蛋), my favourite. Just like the ones I ate at Oasis Restaurant and Paradise Inn, the egg omelette was fragrant and uniquely puffy. For a moment, I thought it was a sponge cake with preserved radish (chay po). It is interesting how the chef was able to pan fry the omelette to the extent that it remained puffy when served. Usually, my puffy omelette will become flat as soon as I removed it from the pan. I presume that it would require skills and technique to have this puffy omelette. (Food rating: 3/5) 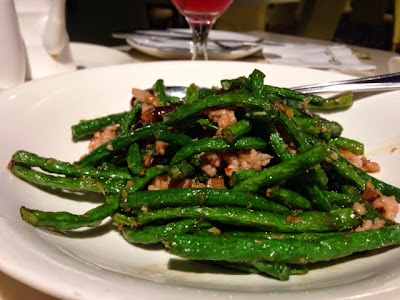 We ordered a vegetable dish, French Beans with Minced Meat (四季豆炒肉丝). The minced meat and chopped mushrooms were extremely fragrant. The french beans was crunchy too. Eating them together gave me both the fragrance and crunch, leaving me fascinated. You can either eat it on its own or with rice. This dish is commendable. (Food rating: 3/5) 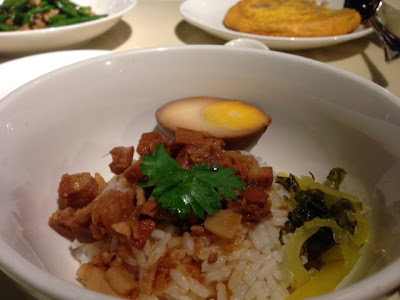 Taiwan-style rice with soy sauce lean pork (卤肉饭) tasted normal. The fragrance of the soy sauce lean pork was incomparable to the ones in Taipei such as Zheng Pork Knuckle 鄭記豬腳飯 or Kingwueng Pork (金园排骨). There were still some fragrance in the lean pork and egg. And the rice was grainy just the way I liked it. The portion of rice was left of a normal bowl of rice. It was just nice especially when we ordered a list of other dishes. This rice can still satisfy your craving for Taiwanese food. (Food rating: 3/5) 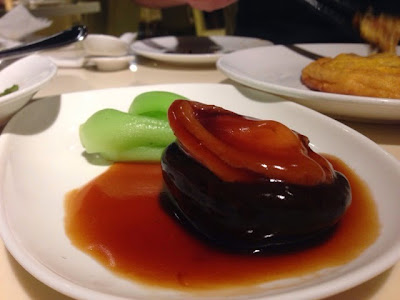 I could not understand why people love abalone. For me, I am neutral to this seafood. My friend ordered a Braised Fresh Whole Abalone (鲜卤鲍鱼) for sampling. The texture of the abalone was just nice. It was not overly chewy. The braised sauce was delicious. The big shitake mushroom was moist and juicy. It was not bad for a person who does not know how to appreciate abalone. (Food rating: 3/5) 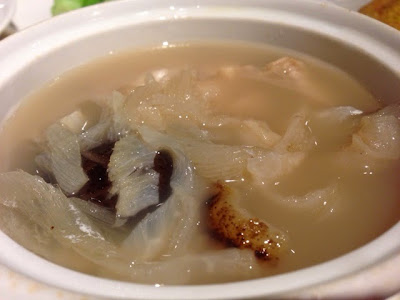 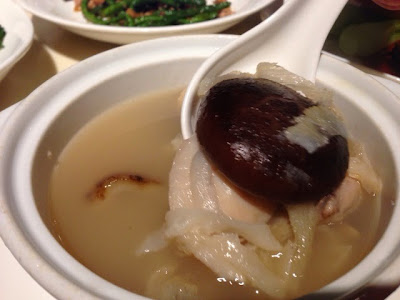 Hmmm... Buddha jumps over the wall (佛跳墙)... In its original taste, it was a simple broth with many seafood like sea cucumber, shark fins, abalone, and fish maw and meat like pig's stomach, chicken and pork. The fish soup was fragrant and soothing. Both of us were tasting for collagen in the soup, but there was none. We expected the soup to contain some collagen because of the many ingredients in the soup. Next we did another test. We added pepper into the soup. Suddenly the soup become more fragrant and flavourful. The added spice made the soup more palatable. For a moment, I immediately thought of the white pepper pig's stomach soup that my mother used to make for me. It brought back many memories when I was younger. (Food rating: 3/5) 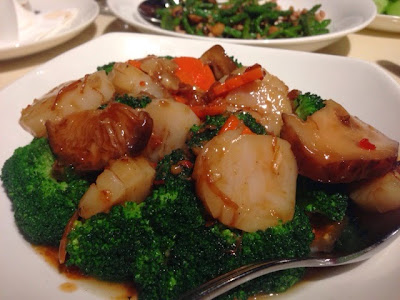 Scallops in XO sauce (干贝炒XO酱) at Shin Yeh were the same as any other Chinese restaurants. The taste was the same. It was disappointing when we expected that the dish would taste differently if cooked in Taiwan-style. Like most scallops dishes, their presentations were the same - broccoli at the bottom and scallops over the vegetables. It was nothing special about this dish. The scallops were freshly cooked. But we felt that the scallops could taste better if they were seared to give a little charred taste. Otherwise, the texture was like eating fish balls. (Food rating: 2.5/5) 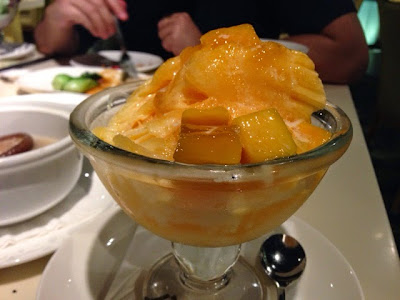 Apart from the omelette, French beans and rice, having the Mango Shaved Ice was a happy moment to end our dinner. The milk shaved ice covered with mango puree and mango cubes were heavenly. The sweetness was just nice and I could not stop eating. I ended up finishing the entire dessert. I have a lot of calories to burn later. (Food rating: 3/5)