Salt grill's interior, designed by Chanto Design, was captivating. The spacious and high ceiling restaurant provides guests with an indulgent area to not only enjoy their meals but also enjoy the breathtaking panoramic view of Singapore both day and night.

My friend and I had a fabulous dining experience at Salt Grill @ Sky Bar. Located at Level 55, similar to Sky57@Marina Bay Sands, the restaurant had a spectacular view of Singapore's famous shopping belt along Orchard Road and the beautiful horizon which was breathtaking. The entire dining experience cost us SGD343.68, where we ordered mostly ala carte dishes, and it was a worthwhile multi-sensory experience. 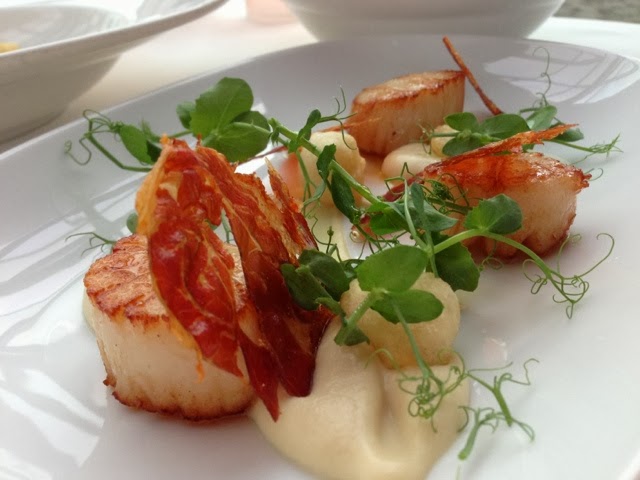 We were welcomed by friendly and attentive staff who guided us to the elevator lobby, which brought us to the restaurant at the 55th floor. We were then greeted with well-dressed staff who brought us to our table. 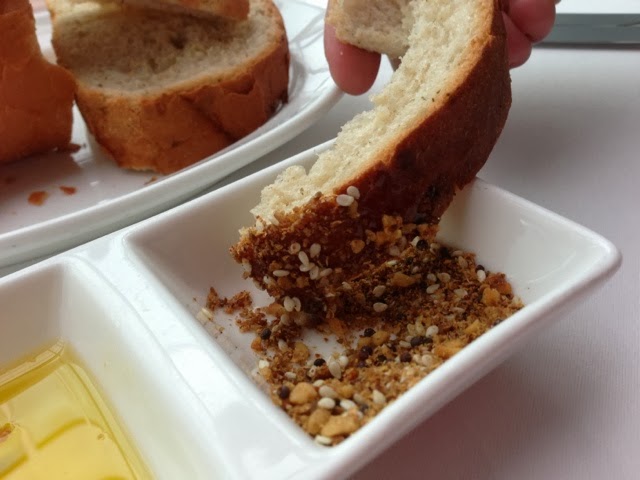 We were first served with their complimentary homemade bread with olive oil and spices. The bread was warm - crispy crust and soft sponge inside. We dipped the bread into the olive oil, followed by the spices. The combination with the bread was divine. The  spices comprised sesame seeds, salt and pepper looked simple but it had an aromatic fragrance that was addictive and delicious. Apart from the spices that I have listed, I was not sure if there were cumin or cinnamon but it definitely tasted great. (Food rating: 3.5/5) 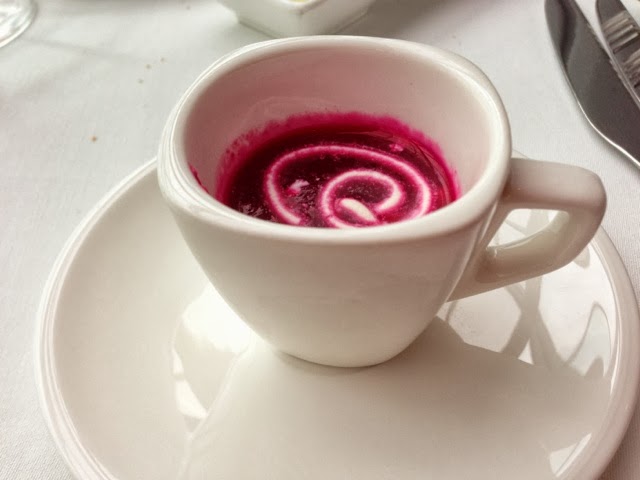 We were treated by the chef with complimentary appetiser, Beet root with yogurt. It was a good combination and I somehow liked the taste. The beet root, unlike fruits, has an earthy and sweet aftertaste, which you may either like or dislike it. For me, I was rather neutral. More importantly, beet root has its nutritional value. It reduces blood pressure that can reduce heart disease and stroke. (Food rating: 2.5/5) 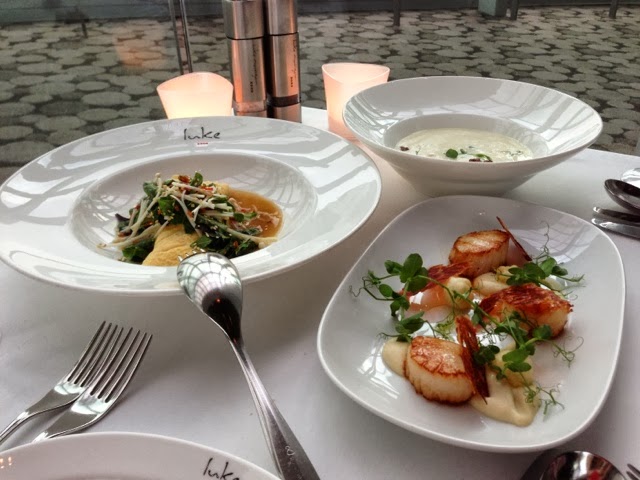 There was a long list of interesting appetisers that we look some time before deciding which to order. We ordered three appetisers - (1) "glass" Sydney crab omelette; (2) pan seared scallops, cauliflower, and dried Serrano ham; and (3) white onion soup served with slow cooked hen's egg and chorizo. 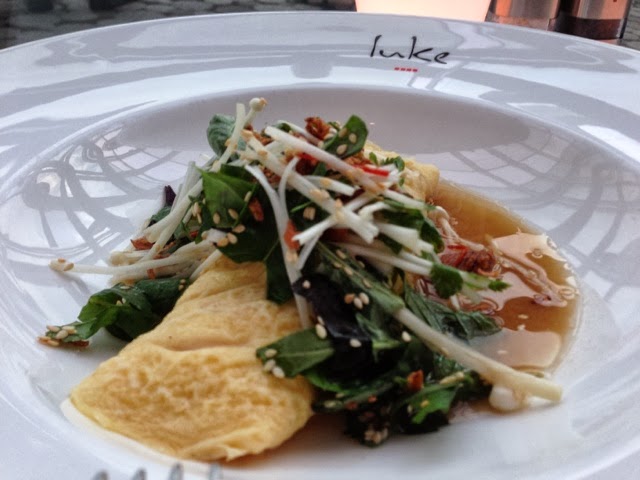 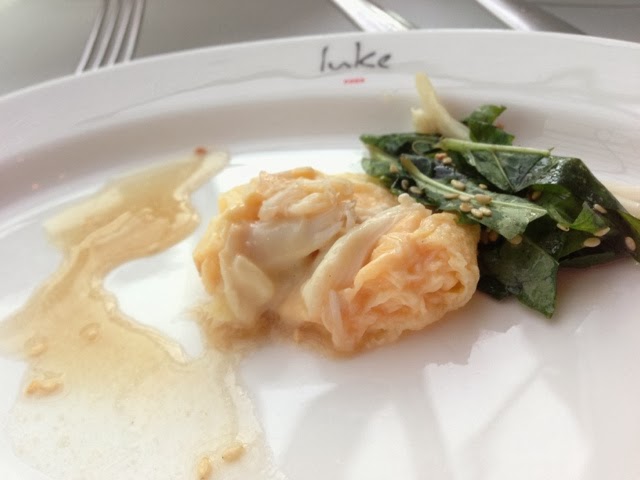 The "glass" Sydney crab omelette was served with enoki mushroom and herb salad, and miso mustard broth. The omelette with crab meat was superb. The egg was perfectly cooked and the crab meat was fresh. The herb salad was nice and flavoursome. The broth was light, clear and tasty. The miso mustard broth was slightly hot and pungent in taste. A superb combination that definitely whetted our appetite.  (Food rating: 3.5/5)

Next, we were served with pan seared scallops, cauliflower, and dried Serrano ham. Serrano ham is a dry-cured Spanish ham generally served in thin slices. Before I continue with my review, I must stress that the scallops must be eaten when hot. There was a huge difference when you eat it hot and when it was cooled.

The pan seared scallops were superb - All thumbs up for me! The crispy crust and tender soft meat inside was cooked to perfection. The chef managed to sear the scallops retaining its sweetness and texture, which was indeed tantalising. The dried Serrano ham was nice too - salty and yet with nice texture. The puree, I believe, was cauliflower, which was sweet and mashy. But when the scallops got cold, it was still good but not as great as when you eat it while it was hot. (Food rating: 4/5) 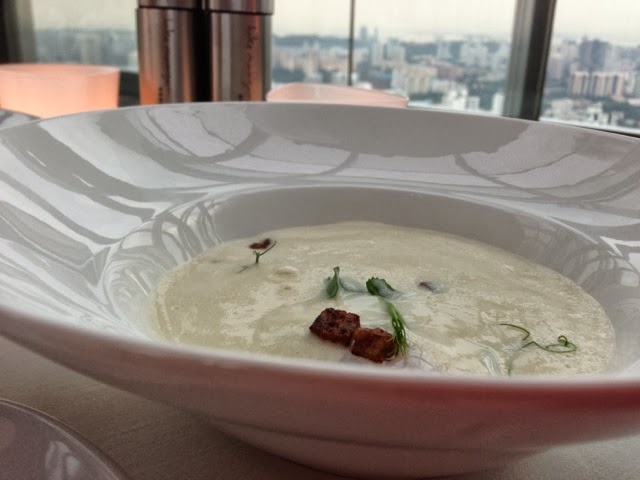 The third and final appetiser was the white onion soup served with slow cooked hen's egg and chorizo. The slow cooked hen's egg was similar to the runny eggs. Chorizo was dried smoked sausages with red peppers. When the soup was served, I was surprised that the soup was white and creamy, unlike the french onion soup, which was dark and clear. I was more surprised by how sweet and delectable the soup was. You could even break the hen's egg and eat it together with the soup and chorizo. (Food rating: 4/5) 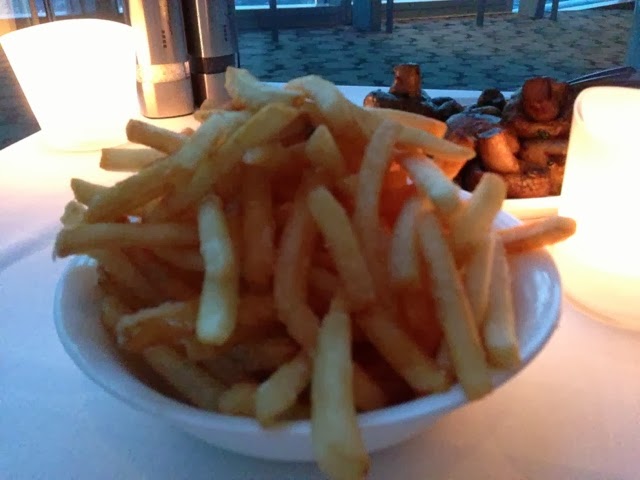 For the sides, we ordered a serving of truffle oil and parmesan french fries (Ala carte price: SGD14); and Roasted mushrooms with garlic butter.

When the truffle fries were served, I could smell the aromatic fragrance of the truffle oil and parmesan cheese that I salivated. I immediately put them into my mouth without considering that it was still piping hot. The fries were addictive - there was the nice aroma that allured you and the nice saltiness from the parmesan that was savoury. Texturally, the fries were firm and had a beautiful golden brown colour. The amount of truffle oil on the fries were just nice that was not overly pungent. (Food rating: 4/5) 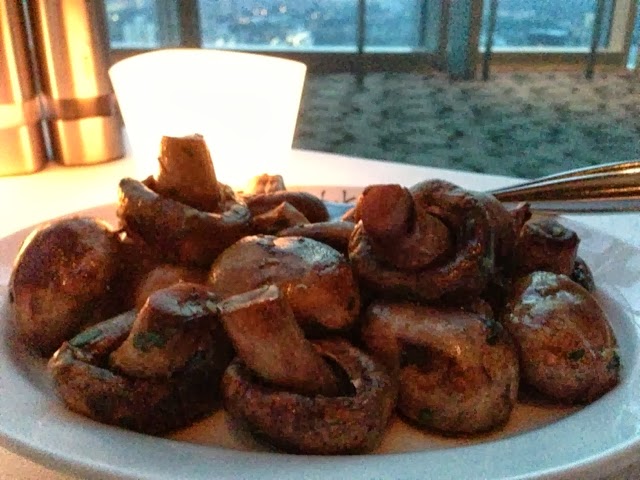 Roasted mushrooms with garlic butter (Ala carte price: SGD15) was extremely fragrant and delicious. The mushrooms were well roasted and the juices from the funghi exploded into your mouth. Because the portion and the mushroom size were huge, it would be better to share with at least three persons. We were three-quarters full when this dish was served. (Food rating: 3.5/5) 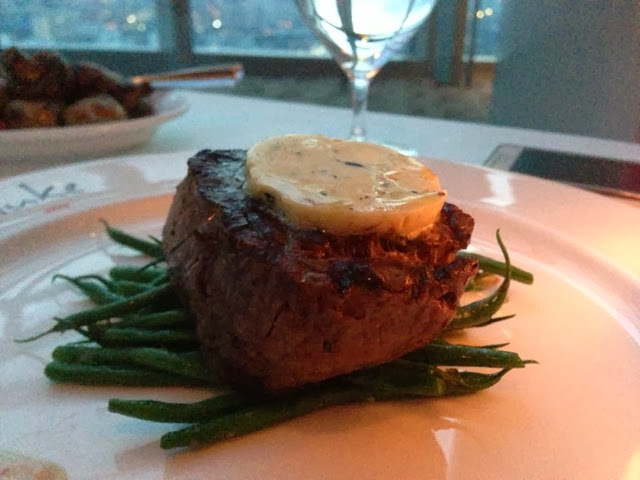 The 200g Fillet New Zealand grass fed was served with green beans and choice of mustard - horse radish, béarnaise sauce, truffled butter, smoky BBQ. The portion was just nice for two persons. The beef was very nicely pan seared and then baked in the oven. I cut a slice to taste its original taste. The beef cut was tender and juicy. The sweet flavour was oozing out from the beef. It was heavenly. (Food rating: 4/5) 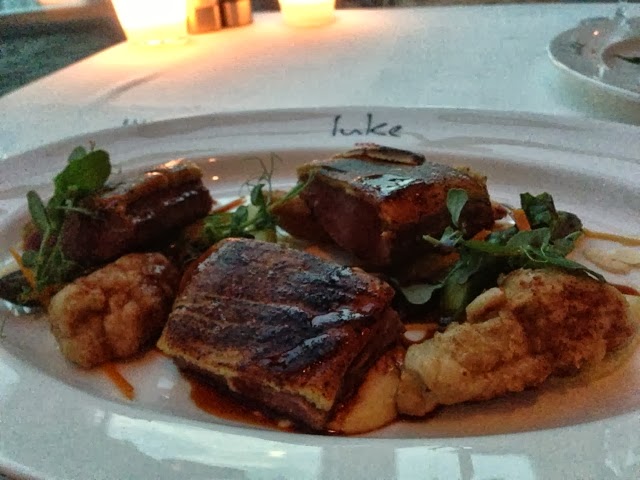 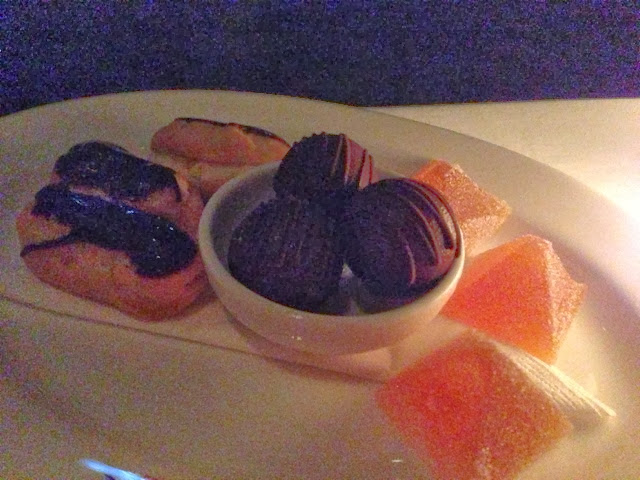 Petite Four (Ala carte price: SGD11) served with chocolate eclairs, apricot jello with sugar coating, and chocolate truffles. The apricot was more like a candy, similar to the texture of gummy bears. The chocolate eclairs and truffles tasted normal. Even though the desserts were delicious, my expectations became higher after the ambrosial meal prior to the dessert. I was expecting for something more spectacular to blow me away. (Food rating: 2.5/5) 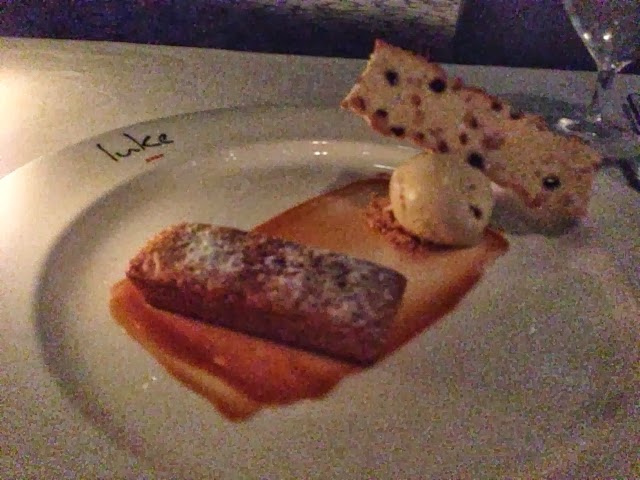 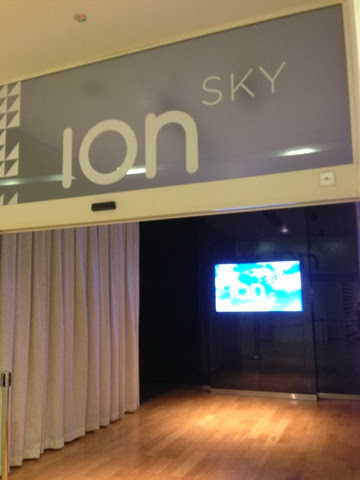 The lobby to the Level 55 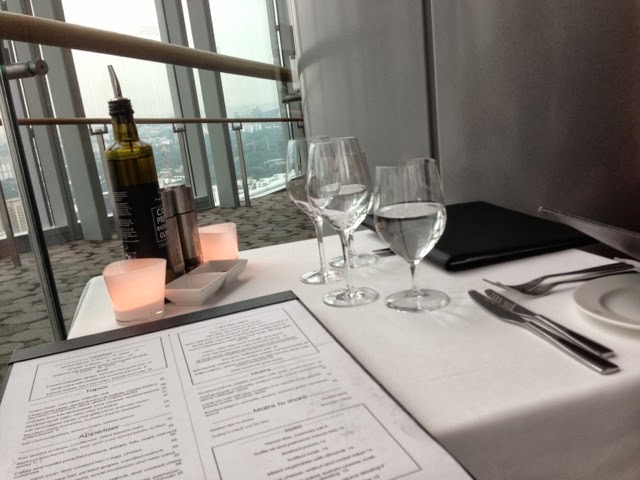 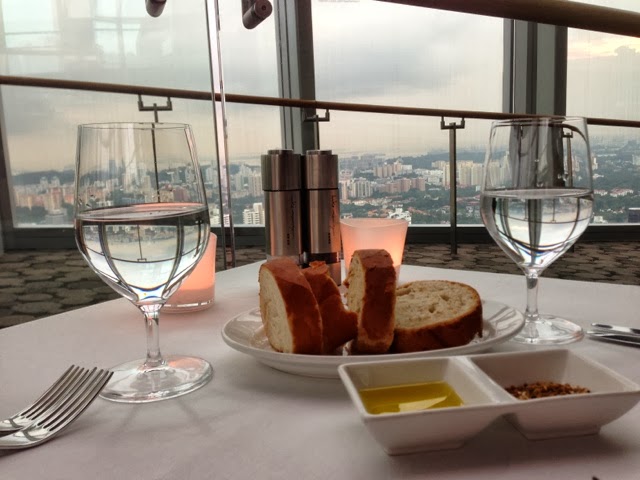 Our table with a nice scenic view of the sun setting and the Singapore landscape. 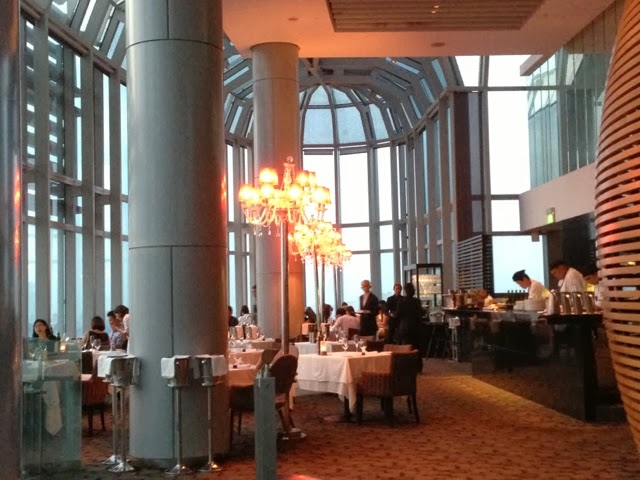 The grand interior decor with dim yellow lights that was romantic. 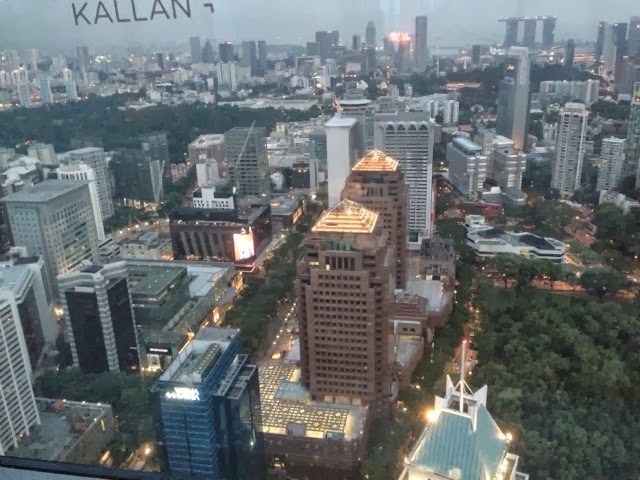