Here we're at Jin Shan restaurant again. This time, we were here to celebrate my MIL's birthday. We ordered a Longevity dinner menu (福禄寿喜宴). I like the nice decor in the private dining room. It was cosy and posh. The hanging chandelier was pretty that the guests kept praising of the nice ambience. 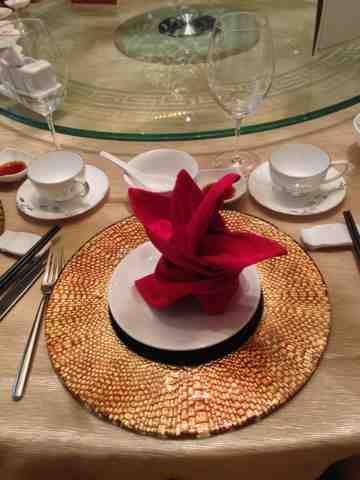 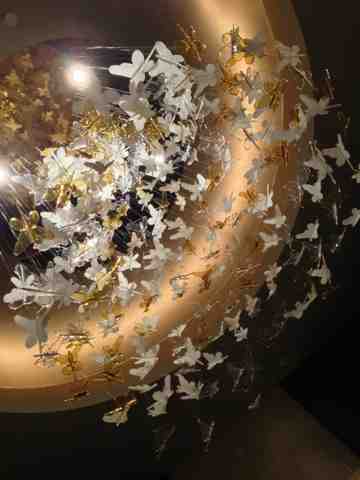 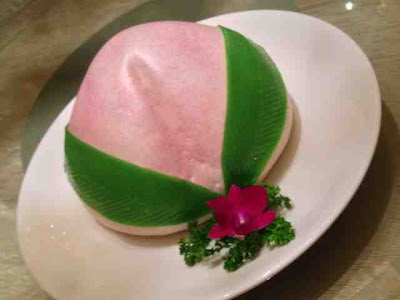 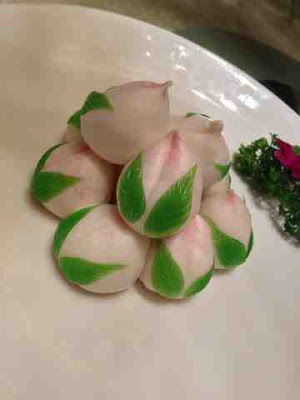 Longevity Birthday Buns (蟠桃献寿-金山楼大寿桃) were served first. At first, we were surprised that it was a huge longevity bun until it was lifted. Once it was removed, there were many smaller peach buns. All made from flour with lotus seed filing, the buns were distributed around the table. I loved the buns. The light pink bun was soft and sweet and filled with not-too-sweet filling. It was fantastic. (Food Rating: 3/5) 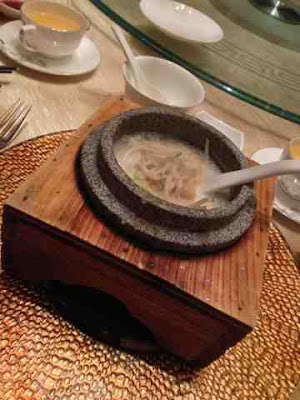 Double-boiled Superior Shark's Fin with Shark Cartilage Soup (石锅鲍翅-鲨鱼骨汤鲍翅) was served next. The rich cartilage soup was rumoured to have nutritional value related to beauty. The rich collagen in the broth and shark's fins were boiled into the hot stone pot. It was rather difficult to drink the soup as the soup was sizzling hot. I had to transfer the soup into a bowl before I could start drinking. (Food Rating: 4/5) 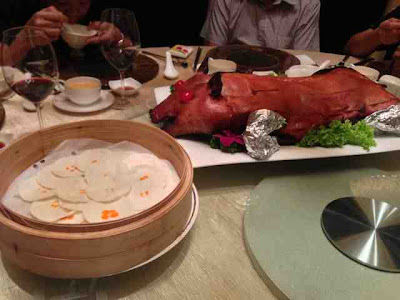 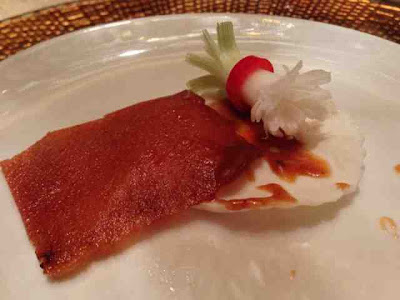 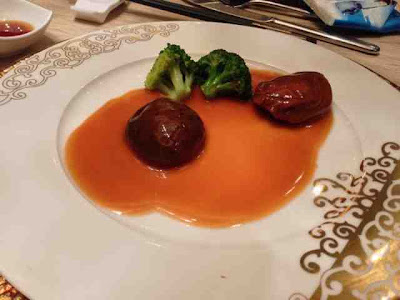 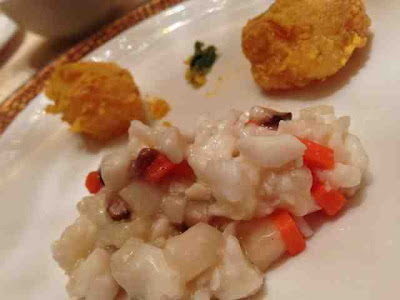 Lobster served in two ways (龙马精神-龙虾双味): Fried Lobster with Salted Egg Yolk (金沙龙虾)   Sauteed Minced Lobster with Chestnut (马蹄龙虾松) were one of the best dishes I had at Jin Shan. Amongst the two lobster dishes, the Sauteed Minced Lobster with Chestnut was the best. The lobster meat was perfectly cooked and not tough. The carrot and water chestnut bits added the crunchiness in the dish. As for the Fried Lobster with Salted Egg Yolk, it was nice. The salted egg yolk with the sweet lobster meat was a great blend. Perhaps that it was deep fried, I did not enjoy it as much as the former. (Food Rating: 3.5/5) 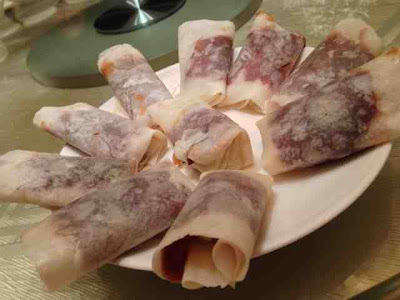 Crispy Peking Duck (脆皮烤鸭) was another good dish. Popular for its crispy duck, the dish was served with the crispy duck skin and sweet sauce with spring onion sticks, wrapped with a thin slice of crepe. The savoury and sweet taste of the dish was very uplifting. You can just eat it on its own. (Food Rating: 3/5) 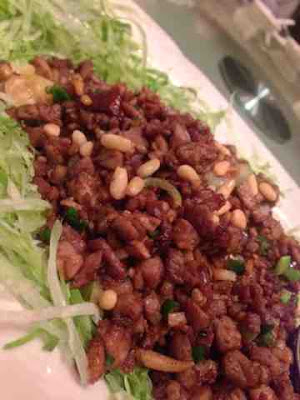 Stir-Fried Minced Duck Meat (鸭肉松) was prepared from the remains of the peking duck. The restaurant cut duck meat into smaller pictures and then stir-fried. Topped with pine nuts, the dish was added with the extra crunch. On the overall, the meat tasted good with white rice. (Food Rating: 3/5) 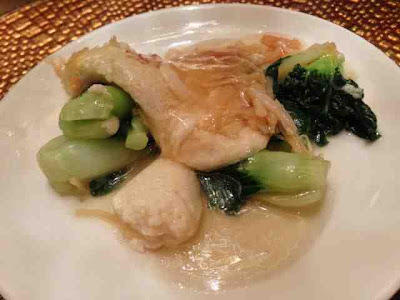 Homemade Mashed Beancurd with Dried Scallop in Brown Sauce (X府安康  干贝荷花豆腐) ... When I think of it, the mashed beancurd had a unique taste. It was very different from the ones we had with from Mr Bean or Jollibean. The vegetables were well prepared as it was crunchy, yet not raw. The dried scallop bits added savoury to the dish. I liked the dish in general. (Food Rating: 2.5/5) 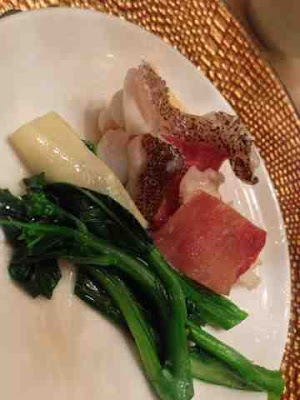 Steamed Sliced Garoupa with Ham and Mushroom (玉树红斑) was a rather salty and overwhelming dish. Perhaps it was more a Chinese cuisine and does not suit my Singaporean taste buds. The preserved ham was very salty. It made the entire dish salty. However the sliced Garoupa (fish) was very nicely cooked. (Food Rating: 2/5) 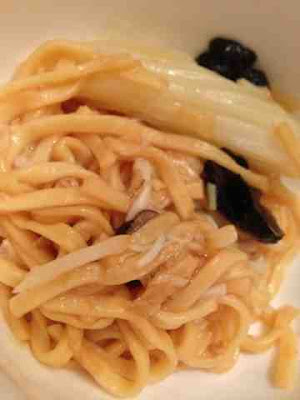 This was the second last dish for the entire dinner banquet. By then, I was too full and could not take another bite of food. However, when the Stewed Long Life Noodles with Black Truffle (黑松长寿面) was served, I could not stop eating. The noodles cooked in al dente style with  black truffle was simply delightful. By the time I finished the bowl of noodles, I could see my tummy sticking out as if I were a pregnant lady. (Food Rating: 3/5) 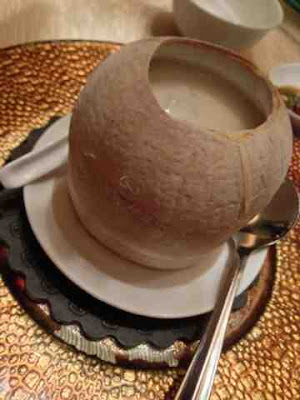 I always dislike the taste of almond cream. To me, it has that synthetic smell and taste.  I was very skeptical when the dessert Double-Boiled Bird's Nest with Lily bulk and Almond Cream (百合杏汁燕窝) was served in a coconut. Interestingly, the coconut and the almond cream, when mixed, tasted so well. The almond cream was not longer overpowering and the coconut meat added the sweetness to the entire dessert. Of course, not forgetting the bird's nest, the entire combination was SUPERB! It is unforgettable! (Food Rating: 3.5/5) 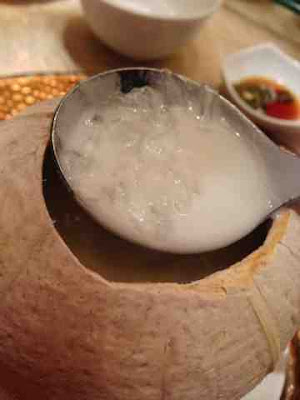