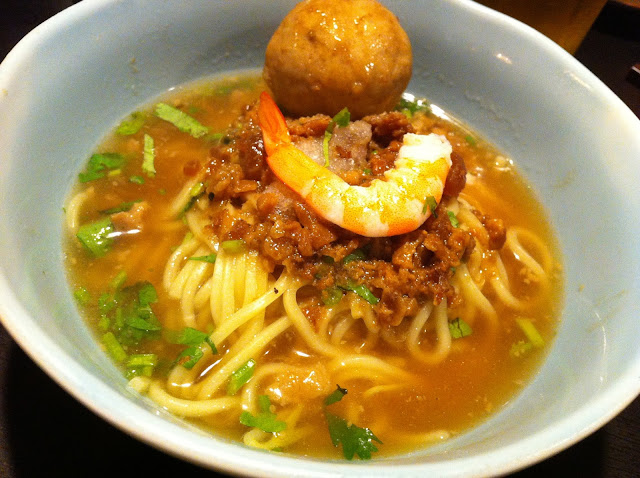 Story began as far as 1895 where a fisherman named Hong migrated to Fucheng from Hangzhou. Because of the rough seas between the Tomb-sweeping Festival and Mid-Autumn Festival, there was a long lull period. In order to make ends meet, Hong began selling noodles. Soon, his Tan Tsi noodles became popular and he took up the business full time.

We enjoyed the lunch immensely. It was a good lunch where we tried authentic Taiwanese food. We spent a total of TWD1,727, which was equivalent to SGD76, for two persons.

So, have you tried the restaurant before? Do share your experience.

We ordered their specialty item, Tan Tsi Noodles (擔仔麵) with Special Meat Ball (特滷貢丸). When the noodles were served, the first thought that came to my mind was "Isn't it prawn noodles soup?".  The noodles were perfectly cooked - firm to the bite. The soup was sweet that was very addicting. The meat ball was firm and tasted good. I would definitely recommend this dish. (Food Rating: 3.5/5) 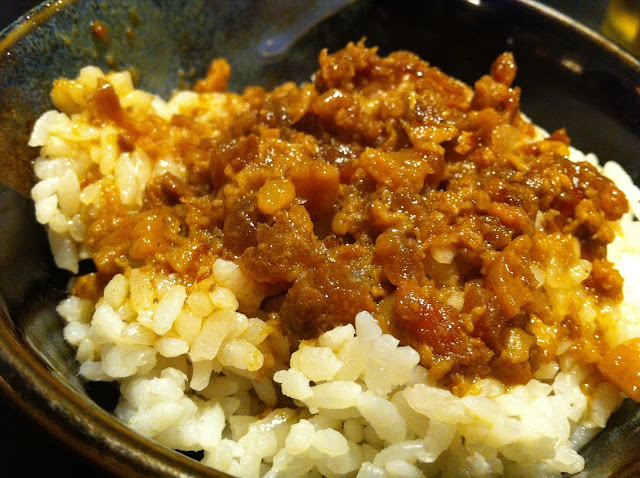 Pearly-white steamed rice and braised pork were the two quintessential ingredients that made the restaurant's Traditional Braised Pork Rice (祖傳肉燥飯) fragrant and heavenly. The rice was very well-cooked that every grain of rice was visible and firm. Recently, I have grown to love short rice like this. The beautiful, shiny rice granules were absolutely delicious. The mildly-sweet braised pork (minced meat) was delicious too. The spices in the sauce was very aromatic and savoury. I loved the bowl of rice immensely as I could taste the sweetness from both rice and pork. A highly recommended dish. (Food Rating: 4/5) 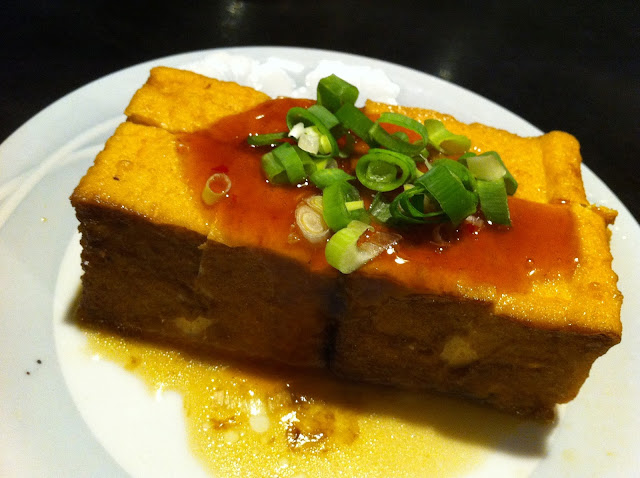 The Braised Tofu in Stew with Soy Sauce (滷嫩豆腐) served firm beancurd simmered in soy sauce stew. The tofu was believed to have simmered for long hours as each piece was beautifully 'browned". The stew had a unique taste, yet very delicious. The dish was so good that was beyond description. A must try! (Food Rating: 3.5/5) 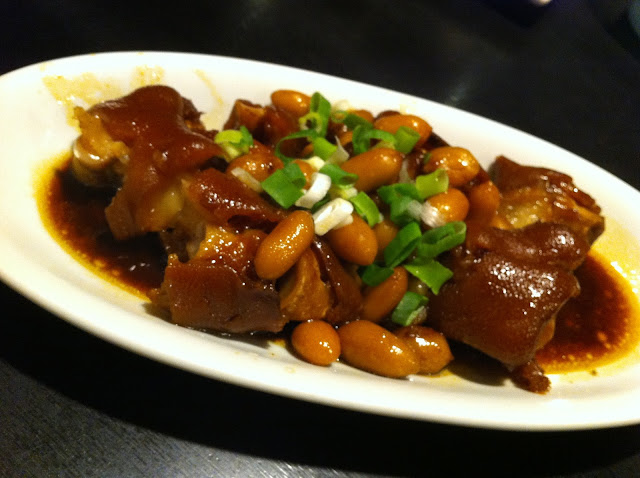 Just by looking at Pork Trotters with Peanuts (土豆豬腳) in the picture above, I would start salivating. The pork trotters was very tender and fragrant as if it was simmered in the sauce for long hours. The braised peanuts were semi-soft with a slight crunch. The pork trotters was the perfect choice to eat with steamed white rice. Try this! (Food Rating: 3.5/5) 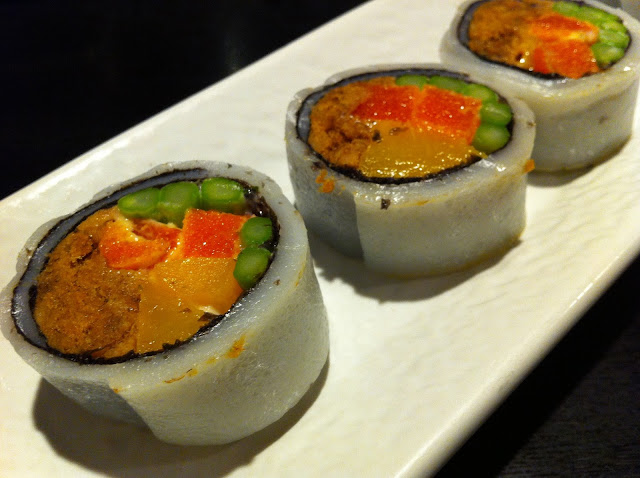 At a glance, the Carviar and Asparagus Roll (龍蝦卵河粉卷) looked like a sushi roll. The only difference was that the sushi roll was wrapped with vermicelli noodle. The ingredients in the roll included the asparagus, chicken floss, lobster roe, and fruit. The roll was delicious and refreshing. It was nice but tasted like any other sushi roll. (Food Rating: 3/5) 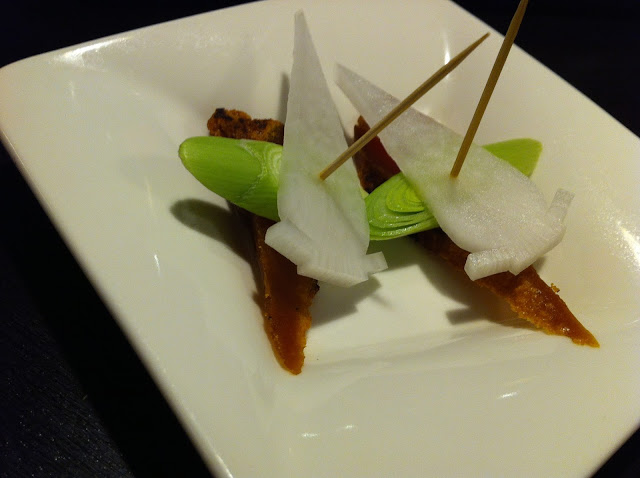 The mullet roe is considered as a delicacy in both Japan and Taiwan. It was mentioned in Wikipedia that the town of Tungkang in Taiwan specialises in this. The mullet or Karasumi (in Japanese) is made by the process of salting the roe and drying it under the sun. A highly priced delicacy like the mullet roe is best eaten with sake.


We ordered two pieces of Baked Mullet Roe (烏魚子). After the first bite, I could say that I did not like it very much. Although it was a delicacy, we were unable to appreciate it. The delicacy had a fishy taste. If you loved Salmon, I believe that you would love the mullet roe too. (Food Rating: 2/5) 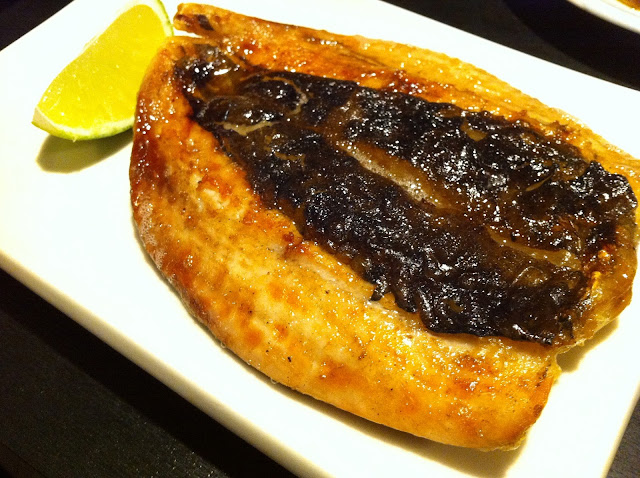 Milk fish is a staple food in Taiwan and milk fish farming in Taiwan is a major player in East Asia.


We tried the Steamed Milk Fish at Zheng's Pork Knuckles from our last trip to Taiwan and it was nice. Now, we ordered a Smoked Milk Fish (烤虱目魚肚). When the fish arrived, we drizzled the fish with lime. The fish was crispy in the outside and tender in the inside. This time round, there was a strong fishy after taste and lacked sweetness. (Food Rating: 2/5) 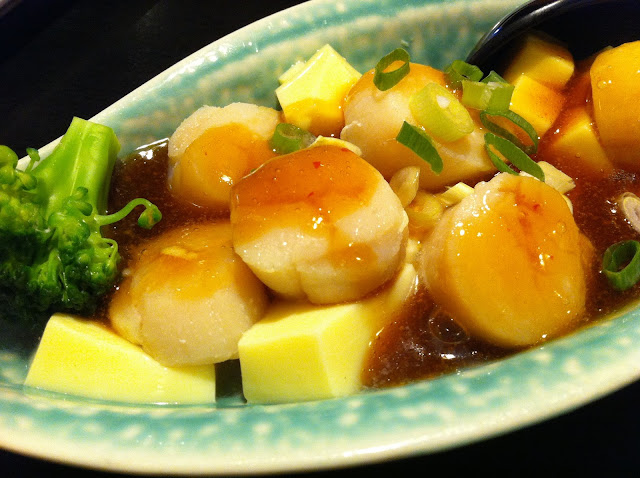 Chef Gordon Ramsay's contestants always struggled to sear the scallops to perfection every time I watched Hell's Kitchen. The scallops were either undercooked or overcooked. After watching the show, I became particular on the quality of scallops. 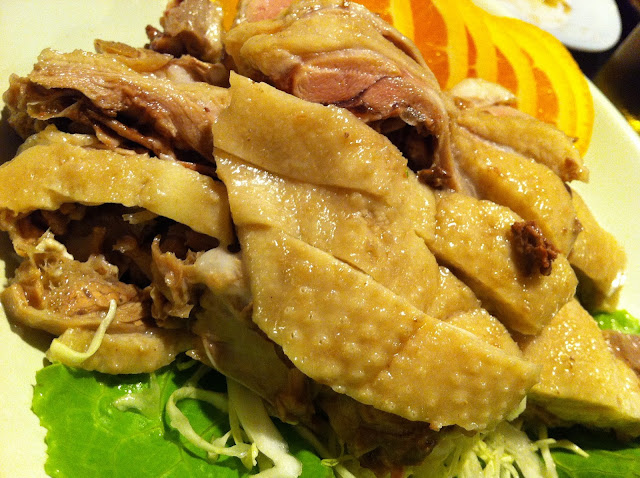 The meat in the Smoked Goose with Tea Leaves (下營茶鵝) was very tough that we found it challenging to tear the meat using a pair of chopsticks or fingers. Unlike its name, we failed to taste the tea leaves in the smoked goose which was supposed to give a nice fragrant to the bird. Nevertheless, I enjoyed the dish.

In some webpages, the smoked goose was recommended to be eaten when served hot, otherwise the meat would become tough when cold. We would have advised the chef the goose hot. (Food Rating: 2.5/5) 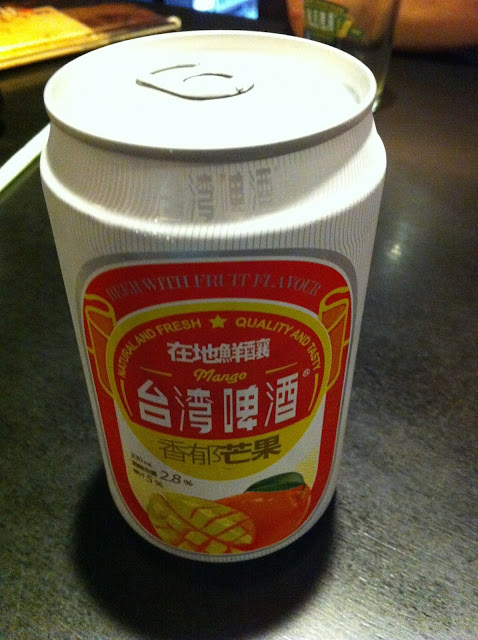 I ordered a can of Taiwan Beer - Mango Flavour for the first time in Taiwan. It was a refreshing beverage with 5% of Alcohol. There was a tint of mango flavour, a ladies' drink.  I liked it very much. Recently, I just found that beer was also sold in Singapore. Yummy!! (Food Rating: 2.5/5) 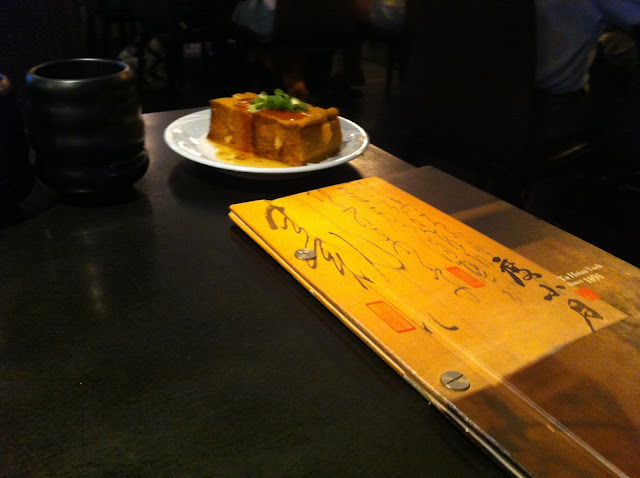 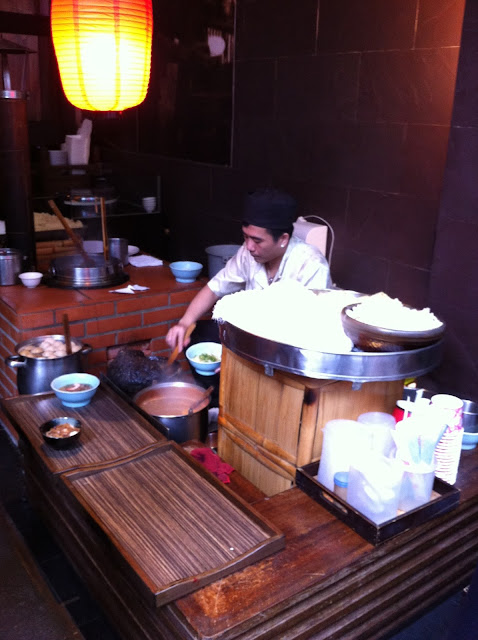