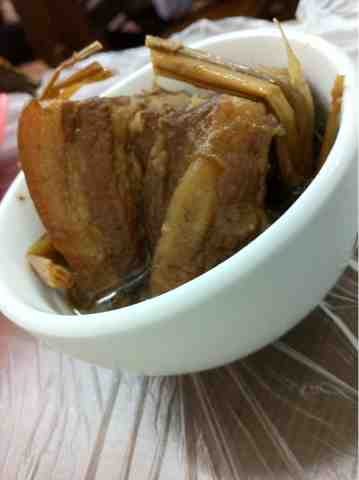 When we were in Hangzhou, we explored the famous West Lake (西湖). After a 12km walk almost the entire lake, we were famished. Every restaurant was crowded with people. Finally, we found a simple restaurant along yanggongdi road (杨公堤). We ordered their local dishes, particularly the Dongpo Pork Belly (东坡焖肉).

Dong Po Pork Belly (东坡焖肉) is Hangzhou's specialty dish. This dish is named after the famous Song Dynasty poet Su Dongpo. Poet Su was banished to Hangzhou in a life of poverty. He improved the traditional process of cooking braised pork belly. He braised the pork belly first, followed by adding Chinese fermented wine that made the red-braised pork. Finally, it was stewed on a low heat. When I tried the dish, the pork was very tender and the braised sauce was not bad. It is one of the better dishes I ordered at the restaurant. 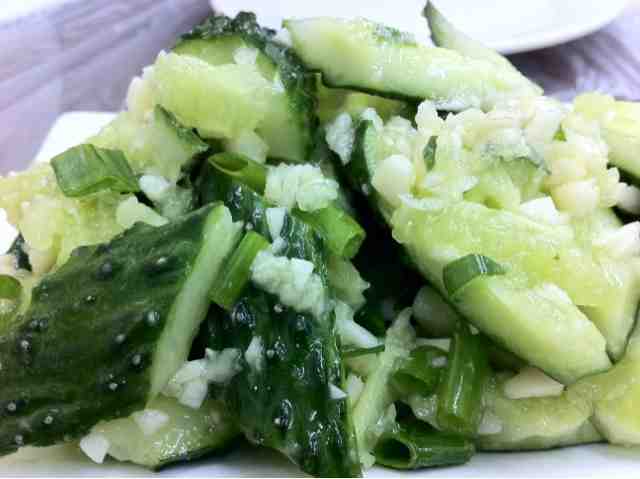 Cold Cucumbers with Garlic (蒜泥黄瓜) was refreshing and appetising. The cold cucumbers was crunchy. The chopped garlic were somehow overly generous. 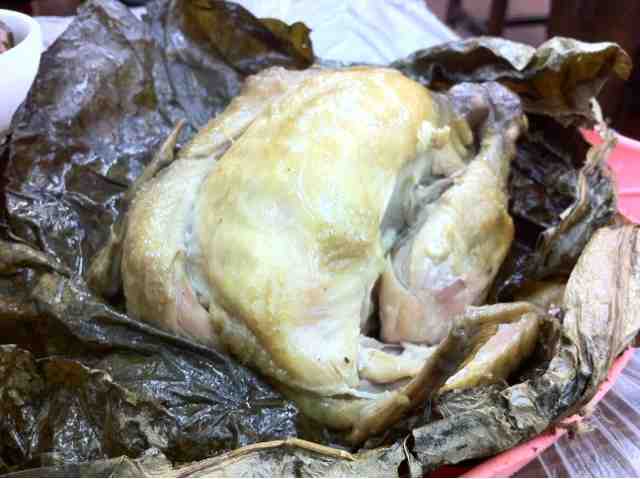 Beggar's Chicken (泥烤叫化鸡) is famous for its delicious taste. The chicken is stuffed, wrapped in clay and then roasted using a traditional Eastern Chinese recipe. The dish seems to originate from a story. A beggar, who led a wandering life, was famished. He chanced upon a chicken but did not have the tools and condiments. He roasted the chicken without plucking it. When the chicken is roasted, the smell spread over a long distance. About a century later, a small restaurant created a method to cook this kind of chicken and called it "Beggar's Chicken".

When served, the chicken had a very nice fragrant. The chicken was salty and the meat was tough. However, it was the one of the best among the rest of the dishes we ordered that day. 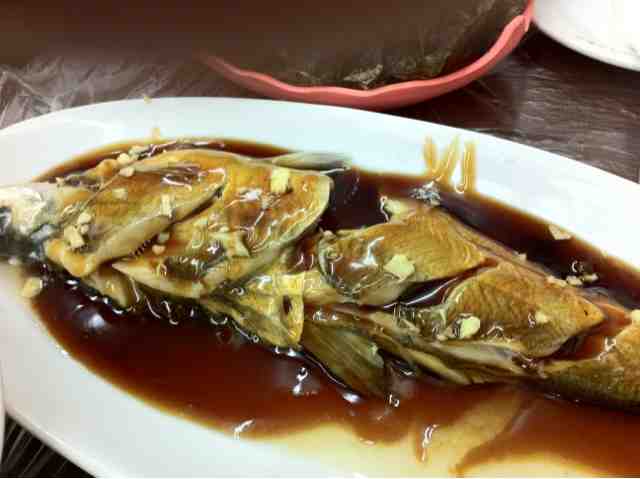 Legend says that the West Lake Fish in Vinegar Gravy (西湖白条) originated from Song brothers who made their livelihood fishing in Hangzhou's West Lake during the Song Dynasty. The younger brother was urged to flee by his sister-in-law after her husband was murdered. She made this sour-tasting fish dish to express her bitter sadness as she sent him off. She then continued to cook this fish dish near the West Lake that eventually made the dish famous.

When I tried the dish, I found that this authentic Hangzhou cuisine, which used grass crap fish, had too many small thin sharp bones. I spent more time plucking and searching for bones than enjoying the dish. The vinegar sauce was too sour that I did not enjoy the dish at all.