July 25, 2021
The Whampoa Makan Place or Whampoa Drive Food Centre is a food centre occupies the location of the now defunct Rayman Market which was opened in 1952. The food centre is named after prominent merchant Hoo Ah Kay who was also known as Whampoa, after his birthplace in China's Guangdong province. Whampoa Hoo Ah Kay was originally a prominent Chinese businessman and early pioneer of Singapore. His name, Whampoa, was derived from his land of origin, Huangpo in Guangdong China. Whampoa, who lent his name to a river, street, and other spots around Singapore, played a key role in the development of the Singapore Botanic Gardens in 1859. There is regarded has been a dependable hawker centre and there are several stalls here that keep attracting lines. There are also two sides here, Block 91 which is mainly catered to the morning crowd, while Block 90 has many stalls that open lunch or dinner onwards.
With the influx of food delivery apps, ordering food from food centres has been a breeze. It is amazing where I was able to order food from various food stalls in one order at a fraction of the delivery fee. I will be focusing on the food stalls that are available on food delivery apps. 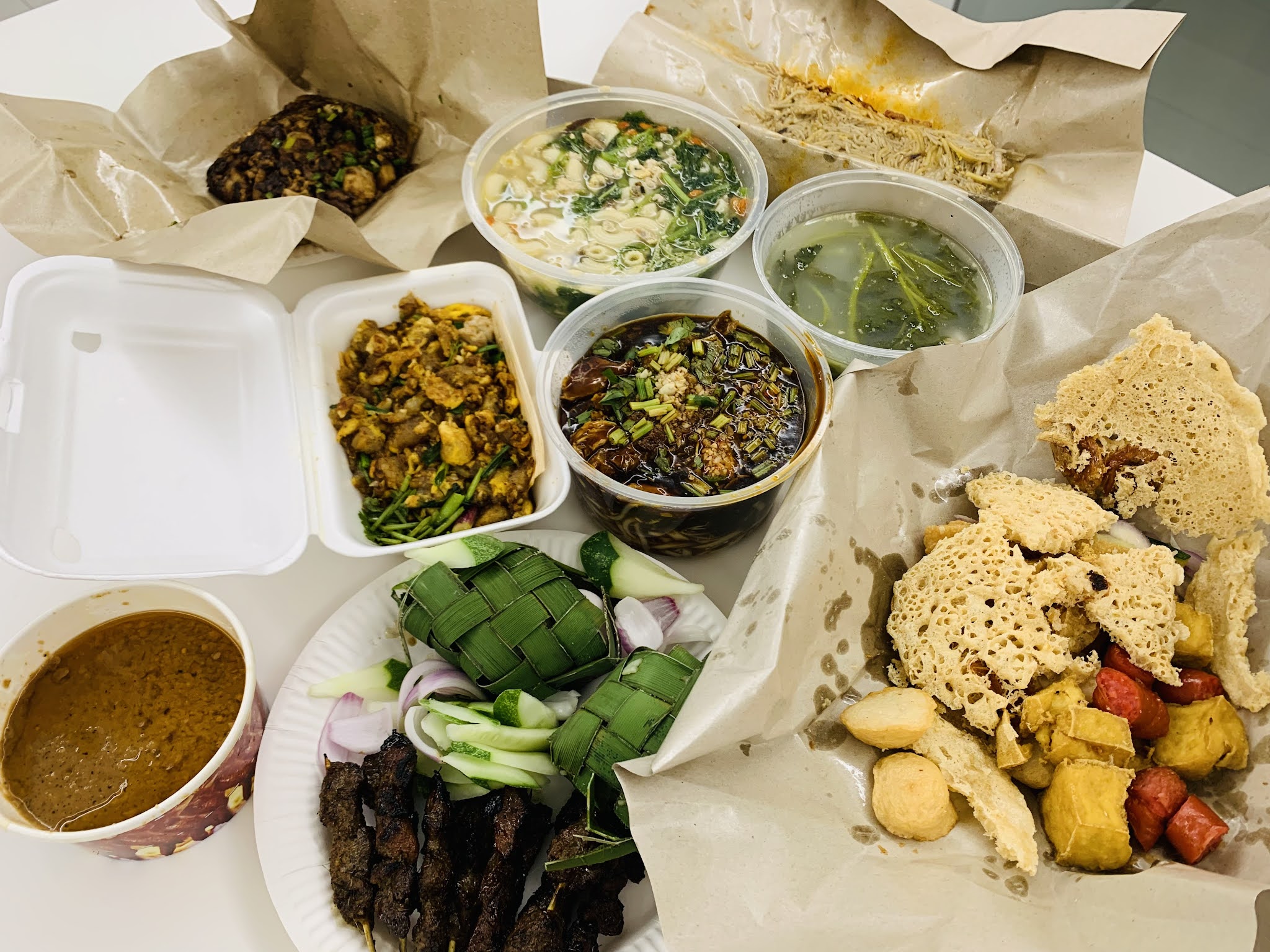 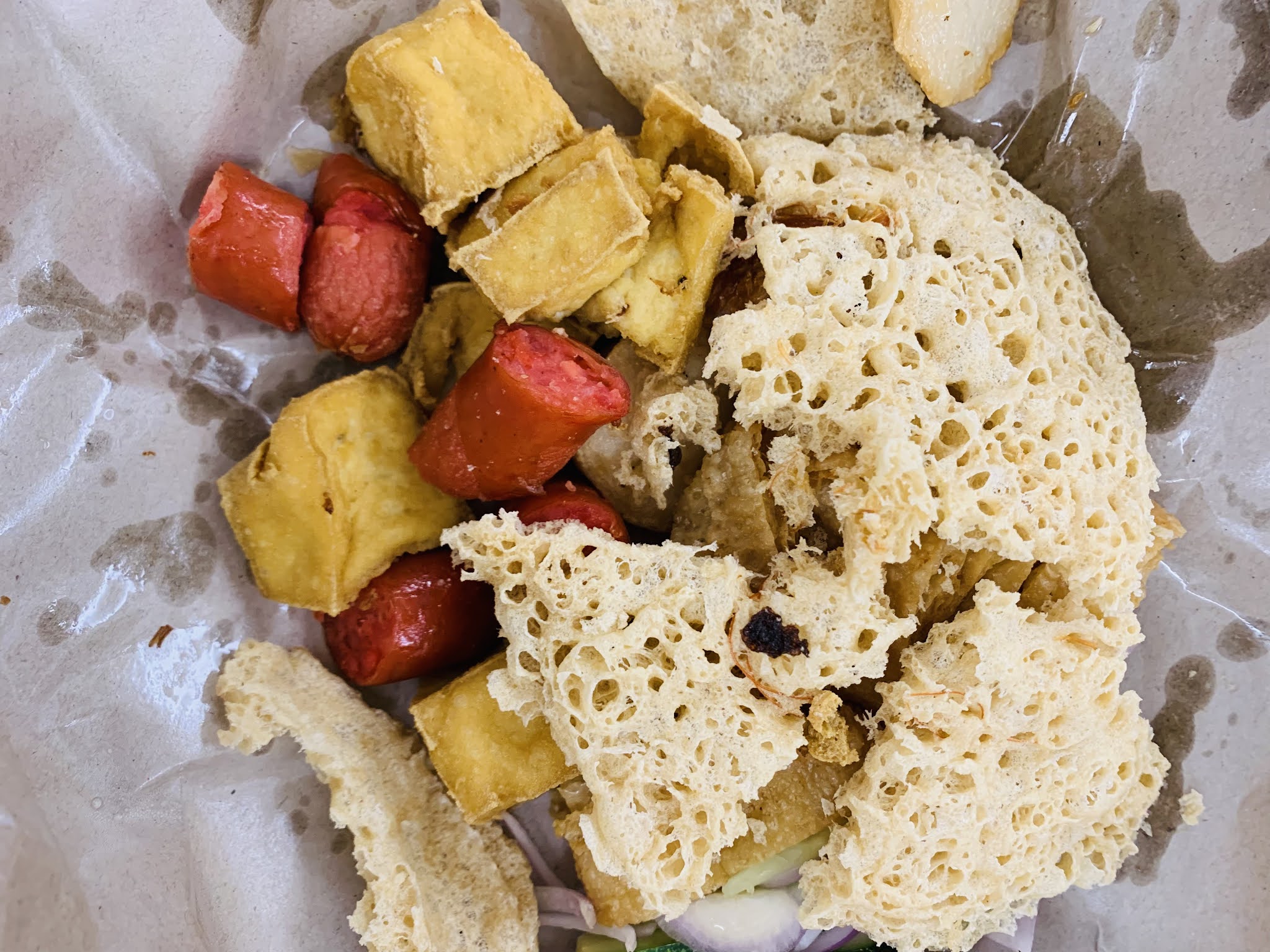 Using the app, you may choose the quantities of the different items. I ordered toufu, prawn crackers, fishballs, pork sausage and mock goose. The total cost was $11.60. The firm toufu cubes were deep fried and it had a nice soybean aroma with a tint of saltiness. The prawn crackers (the porous white crackers) were rich in prawn fragrance despite the missing prawns. The fishballs were fresh but a little salty to my taste. Finally the pork sausages were Taiwanese sausages which I was actually expecting their self made sausages. The final assessment was the chilli sauce. I must say that it was good. It was on par with the one at Lao Zhong Zhong Ngoh Hiang stall. (Food rating: 4/5)
#01-36 Watercress Pork Ribs Soup by Simmer Soup
You must be wondering... where is the photo? Well, I forgot to take the photo as I was enjoying the soup. Why Watercress? Well, it is "rich in Vitamin C, which supports your immune system, helps you heal from injuries, and supports healthy collagen production. Watercress is full of beta-carotene and other caroenoids, which are known for being potent antioxidants." (Source: WebMD) Watercress is long known as a superfood because it packs large amounts of a wide variety of important substances, with a score of 100. In terms of Traditional Chinese Medicine, Watercress is known for its ability to regulate qi circulation, clear heat, resolve dampness, resolve water accumulation, and resolve phlegm. It also helps to tonify qi and blood. (Source: Chinese Nutrition. org)
Enough with all the benefits, the Watercress and Pork Ribs are great combination. The broth was rich with collagen and the watercress was extremely enjoyable. The pork ribs were tender and extremely easy to eat. You can either eat it on its own or accompany the soup with a bowl of steamed rice. (Food rating: 4/5)
#01-40 Oyster Omelette by Whampoa Traditional Fried Oyster 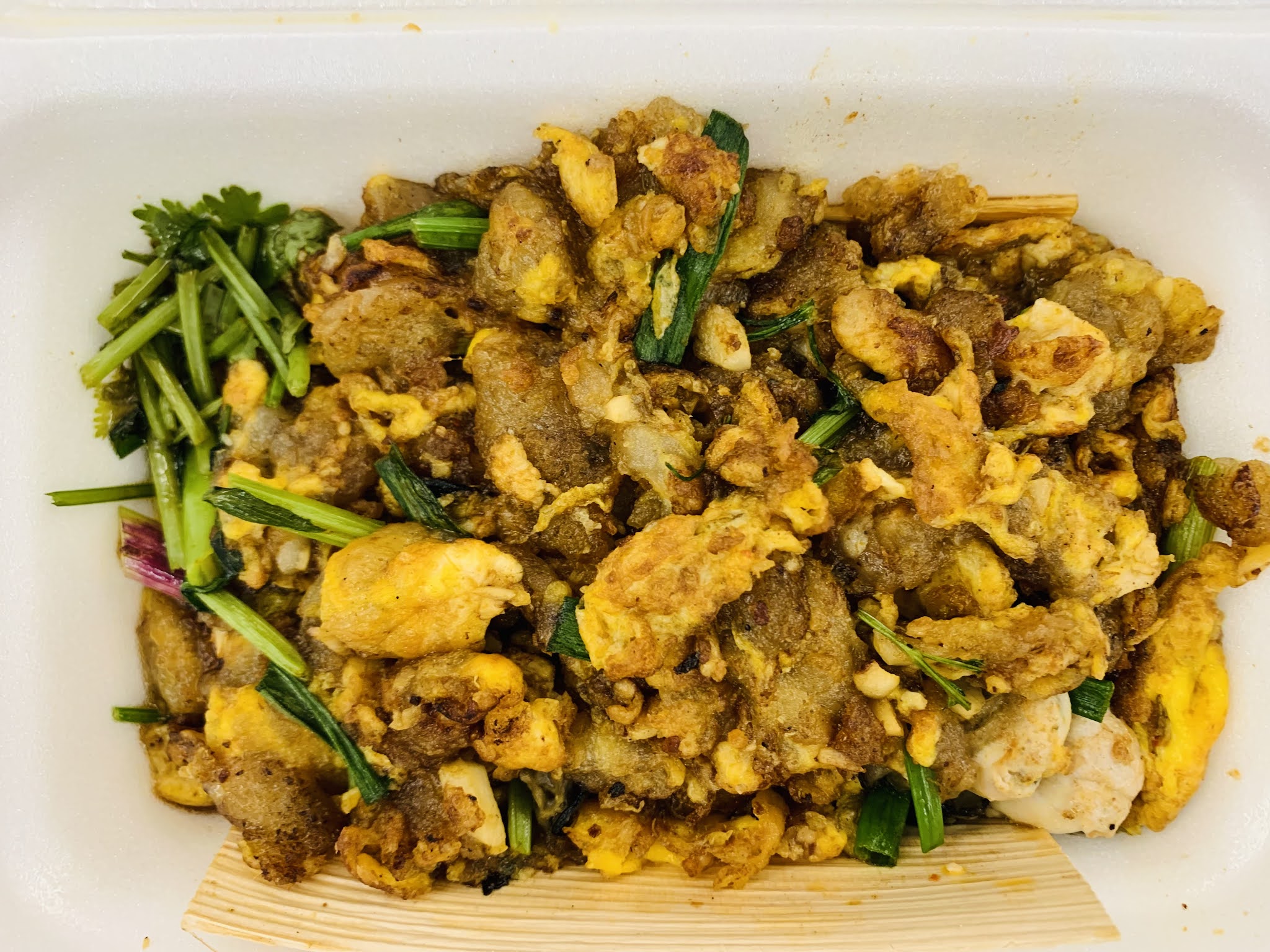 One of the favourite local supper treats, the Fried Oyster Omelette was made of egg batter, oysters and starch pan-fried together. The omelette had a nice wok hei fragrance with a good balance of egg batter and starch. A generous portion of chopped Chinese parsley to add texture to the dish. Pairing the dish with spicy chilli sauce with lime, the omelette blew me away. Compared with Meng Kee Fried Oyster Omelette, Meng Kee's has more crisp and give that added texture and experience. Nevertheless, this $11.50 omelette tasted great as well. (Food rating: 4/5)
#01-64 Fried Fish + Fried Chicken Lor Mee by Traditional Lor Mee 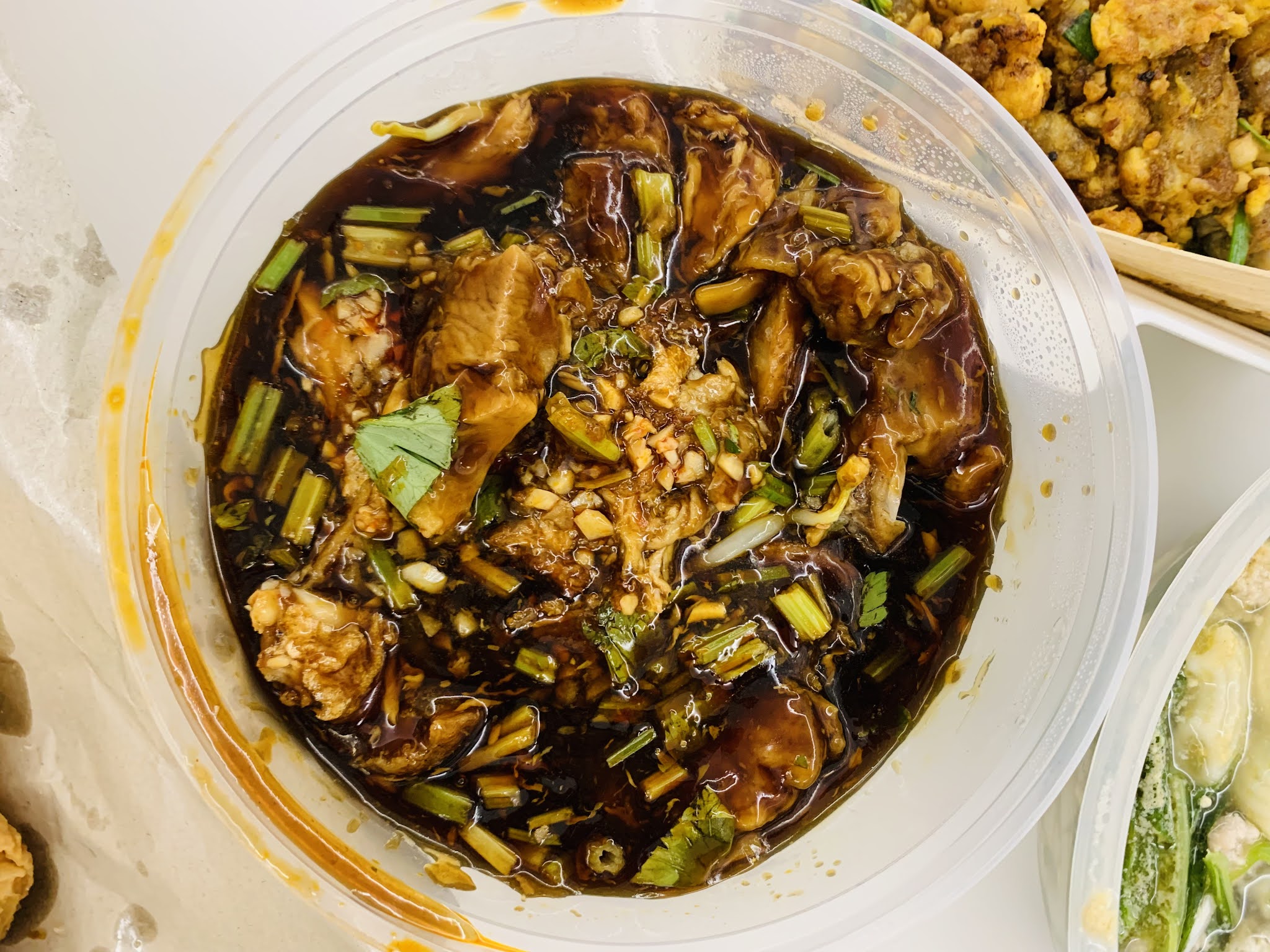 Though this dish is expensive, it is worth ordering. This Lor Mee has the 'old-school' flavour and taste. The fried fritters were freshly prepared and the starchy sauce was fantastic. The generous serving of vinegar, minced garlic and chilli gave the dish many of layers of texture, taste and flavour that was mind blowing. (Food rating: 4/5)
#01-27 Black Carrot Cake by Kim Kee Home Made Carrot Cake 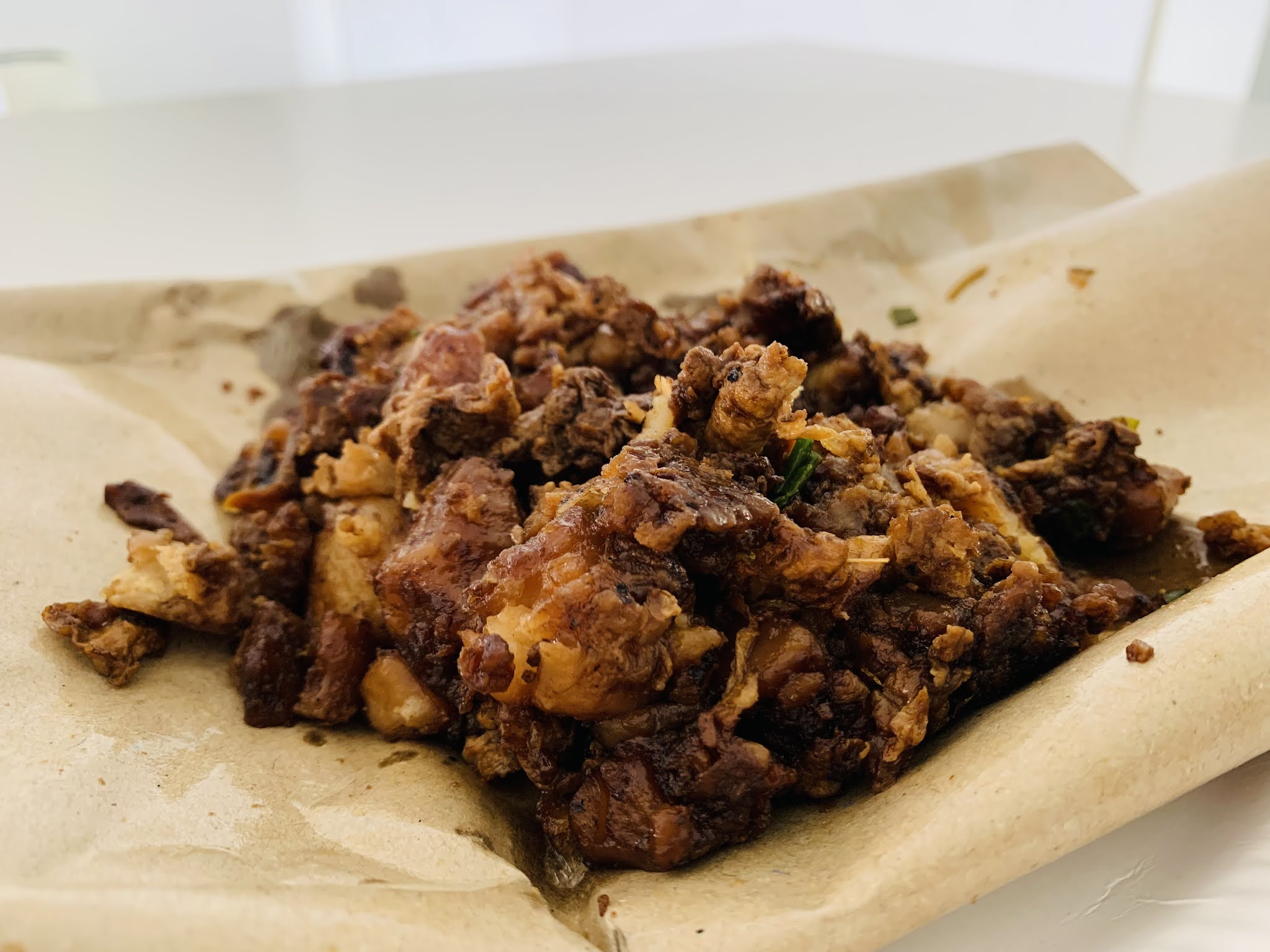 Priced at $4.50, the black carrot cake was pretty nice. Made from radish cakes, preserved radish, black soy sauce, eggs and a garnishing of coriander leaves, this dish would pique your appetite. Compared to the white carrot cake, the black carrot cake is sweet whereas the white one is more savoury. Though the black one is generally sweet, the preserved radish bits bursts with saltiness and lingering sweetness. The eggs used were generous that added that rich, sweet and savoury flavour. Though the texture was less moist, it was still delicious.
#01-18 Spinach Century and Salted Egg Soup by Yuan Yuan Spinach Soup 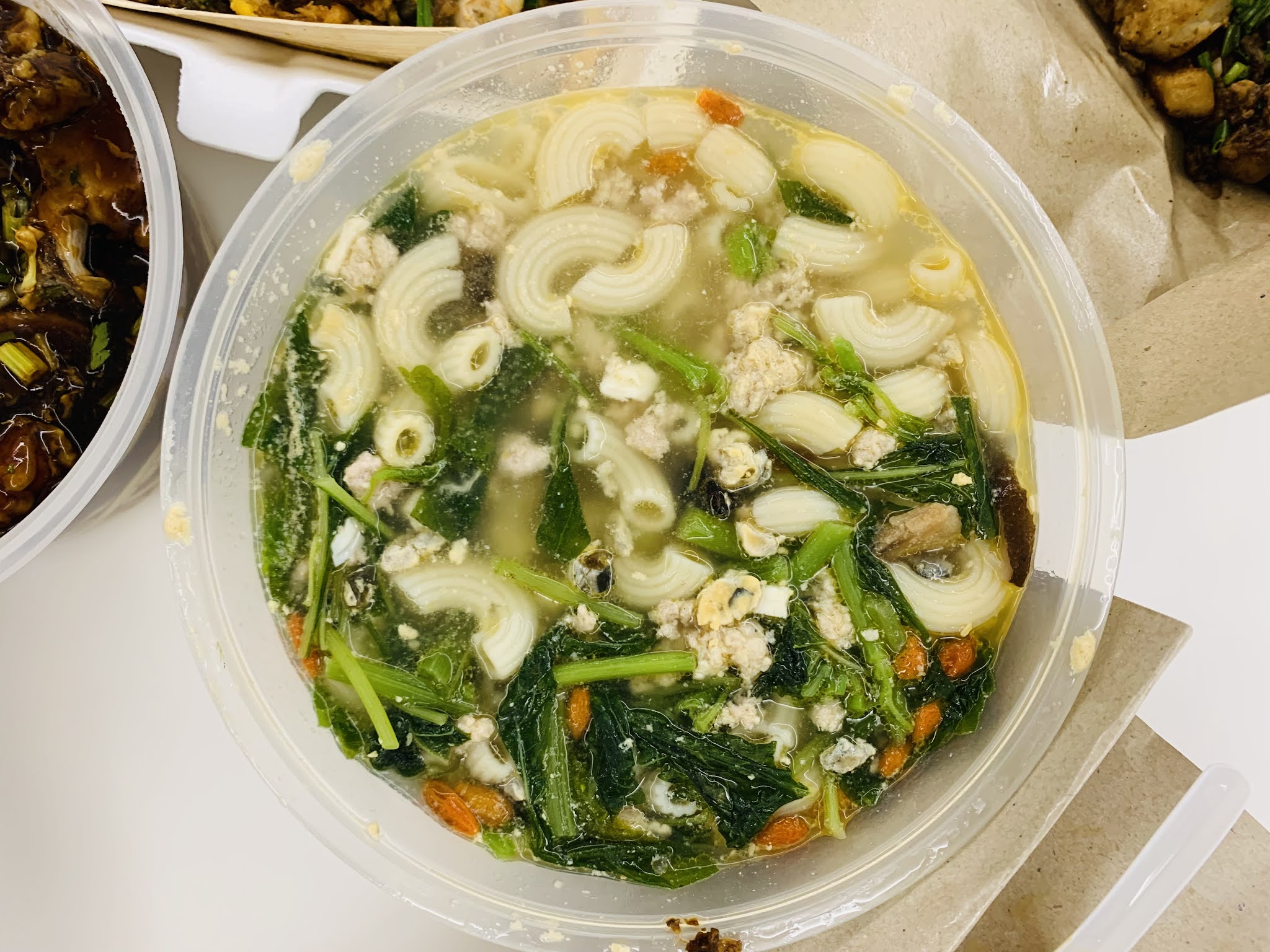 A simple meat broth with Chinese Spinach, minced pork, wolfberries, salted and century eggs was amazingly delicious. I had something similar but with freshly sliced fish. You can eat with with noodles, or steamed rice. For me, I choose to have it with macaroni and the outcome was amazing. The broth has a nice rich pork flavour. The spinach were perfect as they were not overcooked. This is going to be one of my favourite food items in my food delivery listing. (Food rating: 4.5/5)
#01-32 Hokkien Mee by Singapore Fried Hokkien Mee
It is another case of "I am concentrating on the food and have forgotten to take photos again."  A perfect plate of Fried Hokkien Mee or Prawn Noodles has to have a heady wok hei aroma and flavour, a intensely rich savory prawn and pork broth and a consistency that is neither dry nor overly moist.
The serving came generous with the rich flavour was alluring. The broth was divinely rich and the dish was just perfect, neither dry nor overly moist. The chilli blew me away. Oh my, I loved it immensely. (Food rating: 4/5)
#01-76 Mutton Satay (10pcs) by Chong Pang Huat 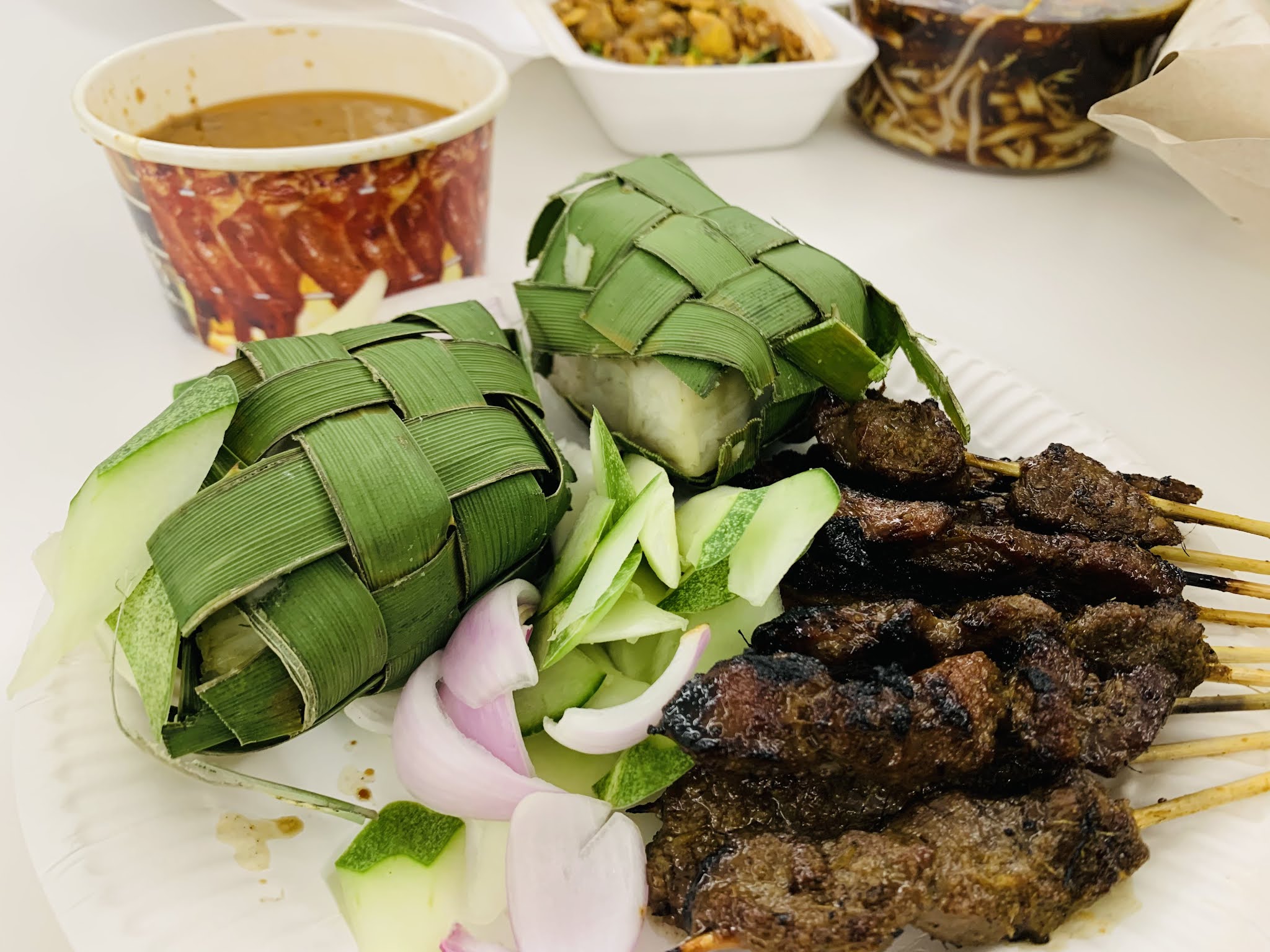