Joining the snake-like queue for beverages at HeyTea 喜茶, Shanghai 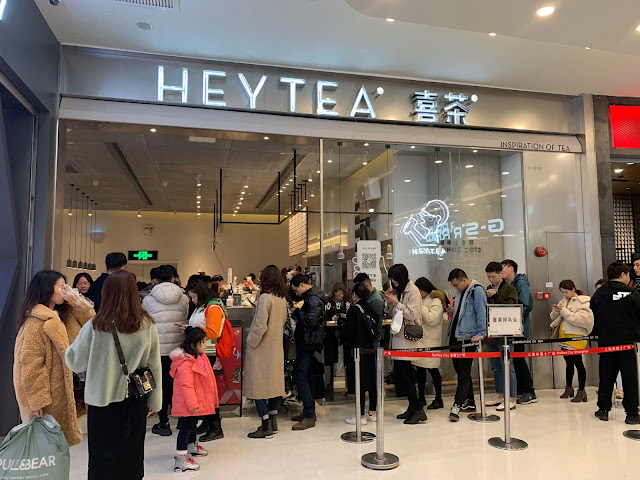 More than 210 million milk tea orders were placed in 2018, according to Meituan - a food delivery giant. Shanghai, Guangzhou, Shenzhen, Hangzhou and Beijing are the top five milk tea spenders, according to the giant. At the end of 2018, China had more than 450,000 milk tea shops and the annual sales revenue for the industry passed RMB 90 billion, according to Guangzhou-based market research firm, iiMedia.

HeyTea or 喜茶, a Guangdong-based milk tea chain, made the headlines for long queues. Founded in 2012, the tea chain has over 110 stores in 17 Chinese cities. Those who are social media savvy would have heard of this brand name and its infamous long queues in China, some of which claimed to take up to seven hours long.

I had the opportunity to try the popular tea chain - HeyTea in Shanghai. The outlet located in Raffles City Shanghai covers about 200 square metres with at least 10 employees making tea for customers. The waiting area inside the store allows about 30 customers but most of them choose to order takeaways. The waiting time for me was an hour. 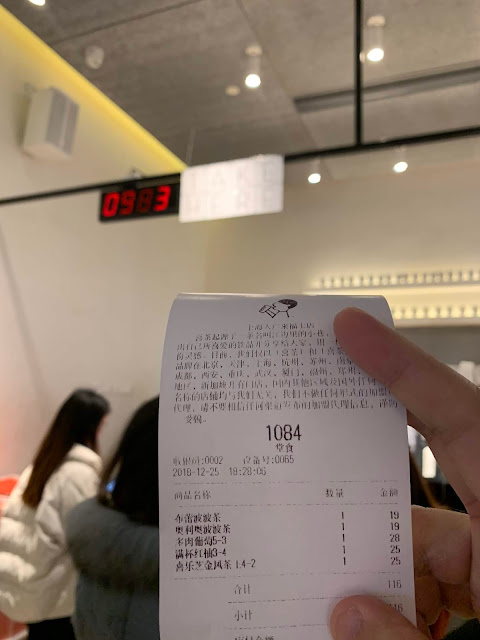 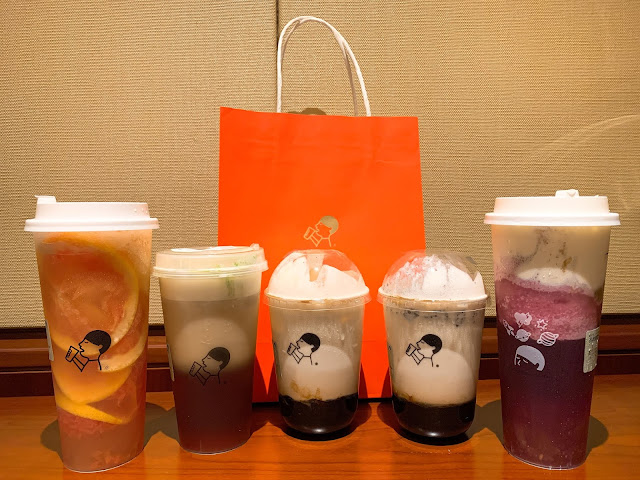 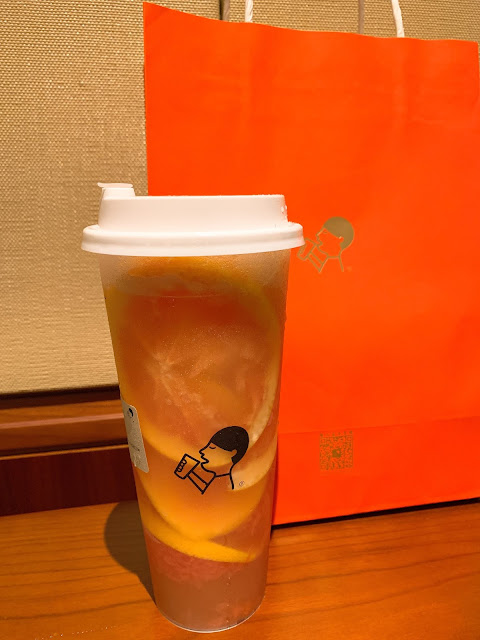 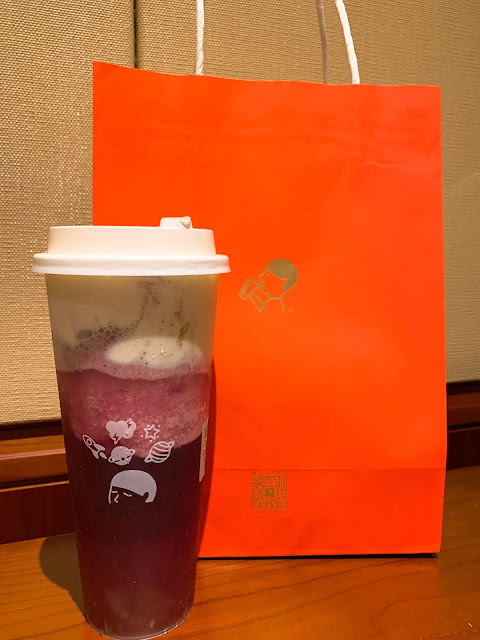 Ranked #2 is this grape juice with Cheezo (多肉葡萄). HeyTea boasts that each grape is hand-peeled with fresh grape fresh. The skin-peeled grape, Yunfeng Tea and cheese were a great combination. The taste was refreshing and sweet and the cheese was not overbearing. Somehow, I prefer Grapefruit Bloom to the Grape Juice with Cheezo. (Food rating: 3.5/5) 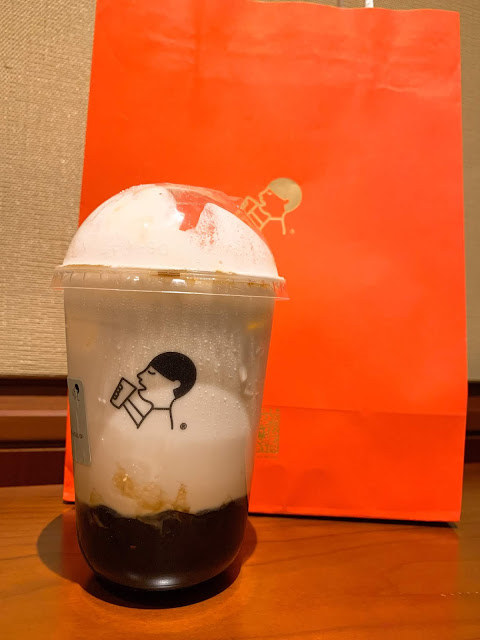 The Brulee Boba Tea (布雷波波茶) was interesting and the pearl balls were chewy and sweet. I like it and dislike it as the same time. Compared to Chen San Ding, the boba tea in Taipei was much better in taste and texture. For boba tea, the only distinguishable factor is the texture of the tapioca balls in brown sugar. Brands either make it or break it. (Food rating: 3/5) 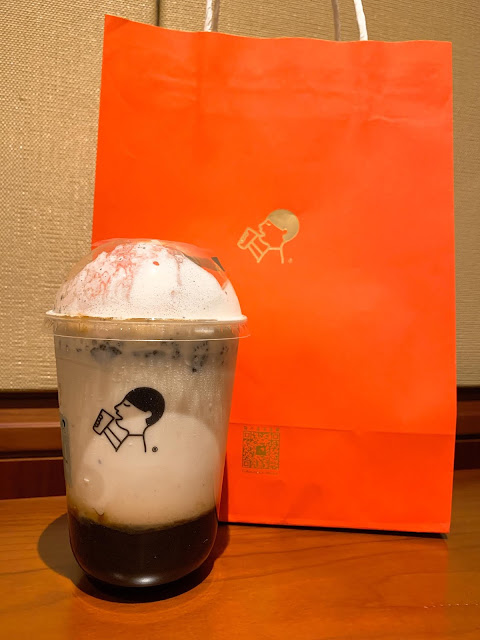 Having boba milk tea with Oreo (奥利奥波波茶) was a rather interesting experience. The combination of foam milk, oreo crumbs and tea was odd. However, the aftertaste was not bad and unpleasant. Boba tea is ranked #3 in China. (Food rating: 3/5) 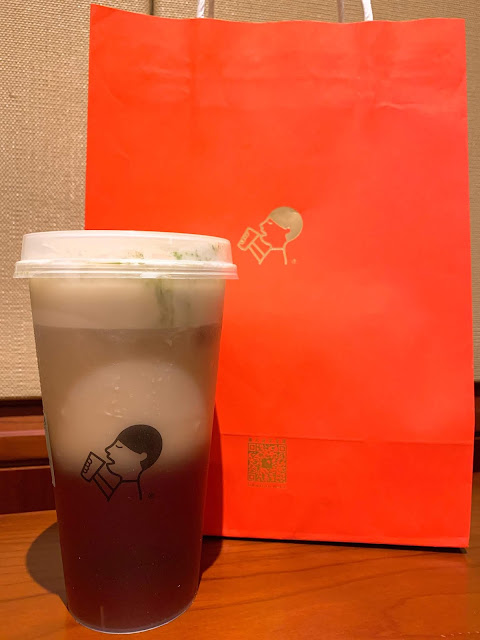 HeyTea uses King Fone tea leaves (金凤茶王) for this beverage. King Fone tea is one of the Oolong tea produced in Taiwan. It is not named after a person. The HeyTea Tea King with Cheezo (喜乐芝金峰茶) was very strong but yet it was not offensive, which is acceptable for non-tea drinkers. The aftertaste was good and smooth and the fragrance was amazingly nice. The yellowish amber coloured cheese on top of the drink complemented the tea when mixed. It is comparable to LiHo! (Food rating: 3.5/5)