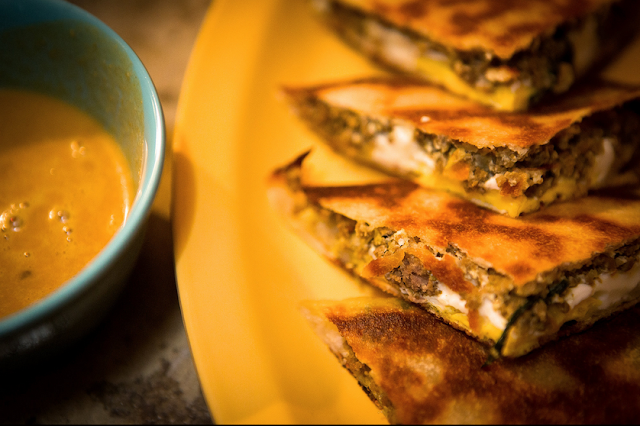 “Whenever I find myself growing grim about the mouth, whenever it is a damp, drizzly November in my soul,” Herman Melville wrote, “I account it high time to get to sea as soon as I can.”

I feel you, Herman.

In my line of work, grimness of the mouth sets in after I’ve eaten too many things that are trying so hard to impress that they lose touch with anything that comes close to pleasure. And each time I see a roomful of people handing hundreds or thousands of dollars over to a chef who stopped caring a long time ago, my mood turns distinctly Novemberish.

Whaling jobs being harder to come by than in Melville’s day, my sea voyages usually take the form of a short ride to a cheap restaurant where warm flavors from another part of the world will burn off my interior drizzle. Recently, these rides have ended at Chomp Chomp in Greenwich Village for radish cakes, noodle soups with transporting powers, coconut rice, triangles of golden beef-filled roti wet with curry sauce, and other treats from the food courts of Singapore.

These are not the franchise-studded cul-de-sacs that fill American malls with hypertrophied cinnamon buns and microwaved despair. Singaporean food courts, better known as hawker centers, are lined with stalls whose proprietors make a small number of dishes, or just a single one, over and over. The appeal of Chomp Chomp, which the chef and owner, Simpson Wong, named after one of the country’s most magnetic hawker centers, is that you can eat your way from stall to stall without leaving your seat.

If Chomp Chomp were an actual hawker center, I’d be an expert on finding the line for carrot cake. No carrots were harmed in making it. Daikon radish cakes, similar to the turnip cakes rolled round on dim sum carts everywhere, are fried with little shrimp, garlic chives and slivered arcs of sweet Chinese sausage. Singaporeans, some of the most food-obsessed people on earth, are extra obsessed with this dish, and for good reason.

Warm, fresh oysters the size of quarters are softly cooked into an omelet, seasoned with soy sauce, fish sauce and garlic chives. Oh luak, it’s called. The omelet has been doused with chile-spiced vinegar, and there is a small pile of minced garlic on the side. Simple, unthreatening flavors, but eaten together they make it hard to stay grim about the mouth.

Both of these are called snacks on the menu. So are the fried whole prawns breaded with cornflakes and curry leaves (just try it, O.K.?); the salad of cucumbers, mango, shrimp fritters and other things that you stir into a deliciously funky-fishy sambal; and the very good five-spice chicken rolled up with taro inside a tofu skin wrapper.

Spider webs of light glow behind the carved wood lattices of Chinese temple doors hanging on Chomp Chomp’s walls. They are new to this dining room, but the schoolroom chairs with metal book racks under their molded seats are carried over from Wong, the same chef’s last restaurant in this space. They are comfortable enough for the first 20 minutes. It doesn’t matter much. Dinner moves quickly. Servers weave in and out from tables to the kitchen, where, behind bamboo shades at half-staff, cooks clack away at smoking woks.

Noodles stir-fried with shrimp and soy sauce, called char kway teow, produce far more happiness than you’d expect from something that looks like shrimp lo mein. The appearance of another stir-fry, nyonya chap chye, is deceptive, too. Clear rice noodles jostled together with tofu and mushrooms, the dish has almost no color and a mild flavor, but the more you eat the better it gets. The Hainanese chicken rice is another sleeper; it tastes like much more than slices of soy-lacquered chicken over rice cooked in chicken broth.

Many dishes are married to their own dedicated condiments. As melamine plates start to mingle around the table, these spouses can become estranged. Try keeping them together; urge them into counseling if you have to, because Chomp Chomp’s condiments are all different, some spicy, some tart, a little shrimp paste here, a little plum sauce there, and energy everywhere. There’s no separating barbecued stingray steamed in banana leaf from its spicy and wonderfully intense sambal, which is daubed thickly on top of the fish, then sinks into it. (Like many in Singapore, Mr. Wong substitutes skate to good effect, but keeps the traditional name.)

How much of Chomp Chomp’s food would attract long lines in Singapore? I’m not sure. For specialists working in hawker centers, mastery becomes second nature through repetition. With around two dozen dishes on the menu, Mr. Wong’s kitchen may not get enough practice to turn out a heart-stopping version of any one of them. Flavors can go slightly out of focus from night to night. Lamb rendang was pasty, dry and a bit muffled at one meal. The next time, it was juicier and so richly curried I could almost believe it was cooked in the “million spices” advertised on the menu.

A durian cream puff, which the menu once ominously advised you to try “at your own risk,” is now a special only when Mr. Wong can get fresh durian. The remaining two choices are bananas fried in a mochi-like batter or sweet potatoes and taro bobbing in a warm coconut-tapioca soup. As vegetable soup desserts go, it is excellent.

A special one night, a potent glop of sea cucumber, mushroom and pork belly, reminded me happily of the wonderfully lunatic sea-cucumber Bolognese from Wong, where the chef indulged his creative impulses. At Chomp Chomp, the goal is faithful translation, and the potent glop turns out to be a genuine hawker dish.

The everything’s-better-in-Queens crowd will no doubt argue that you can eat some of the same things for less at Malaysian restaurants outside Manhattan. Not quite the same things, I’d answer. Much of the menu is strictly Singaporean, and some of its Malaysian dishes have a Singaporean edge. Mr. Wong also picks his ingredients with unusual care. Try the kerabu sotong, a squid salad with a spicy Malaysian dressing. Taste how crisp and juicy the peppers and tomatoes are, how tender and sweet the squid.

Not that I’d talk anyone out of eating Malaysian food in Queens. Go to Queens, go to the Village, go to sea. Go anywhere you need to go to keep November in its place.