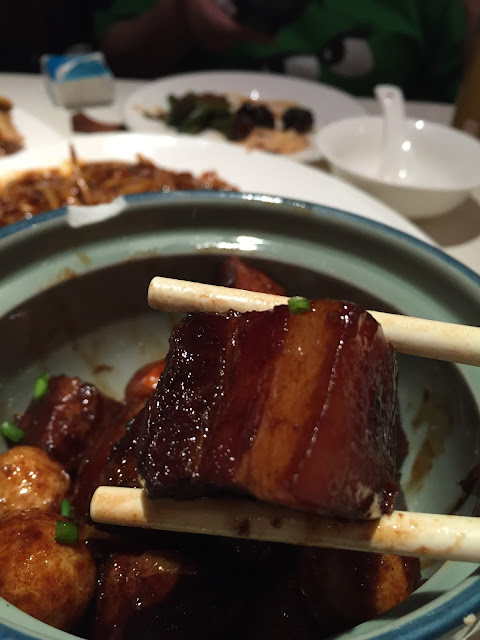 Featured in a popular Taiwanese Travel show, we wanted to try the recommended restaurant, Classic Shanghai Food [老克勒上海菜]. That word "克勒" means class in Chinese. The restaurant has been operating since it was founded in 1875. Shanghai Classic Food serves authentic Shanghainese food, which has rich taste and aroma.
A "butler" welcomed us and ushered us to our table with a window view. The interior had a western setting with "patios" along the perimeters of the restaurant. The rest of the service staff wore uniforms with Chinese collars and pants, displaying the clothes the people wore in the early 19th century.

Despite their flashy uniforms, the service did not come close to the the high class service they aim to offer. Service was slow and the staff were loud. My definition of a high class service restaurant should ensure that the cutlery and dishes were served and collected quietly and service staff do not shout across the restaurant and should anticipate what diners would ask. Like the movie The Grand Budapest Hotel, with Monsieur Gustave acting as his mentor, Zero never misses any detail to ensure the guests are perfectly pleased with their visit by anticipating what they would need.

Putting the service aside, the food was delicious. 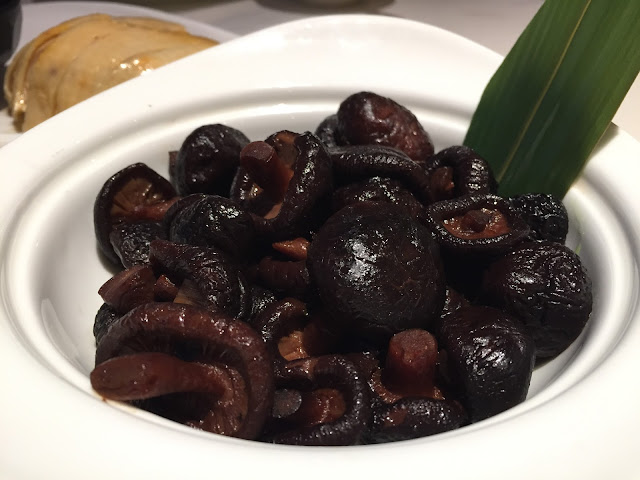 Prepared with Chinese mushrooms, this dish was highly fragrant and sweet. The mushrooms were cooked with Oyster Sauce and then sweetened. The mushrooms, akin to sponges, were filled with saccharine and fragrant sauce. The mushrooms exploded the second they were put into the mouth. The sauce burst immediately and spread in the mouth. (Food rating: 3/5) 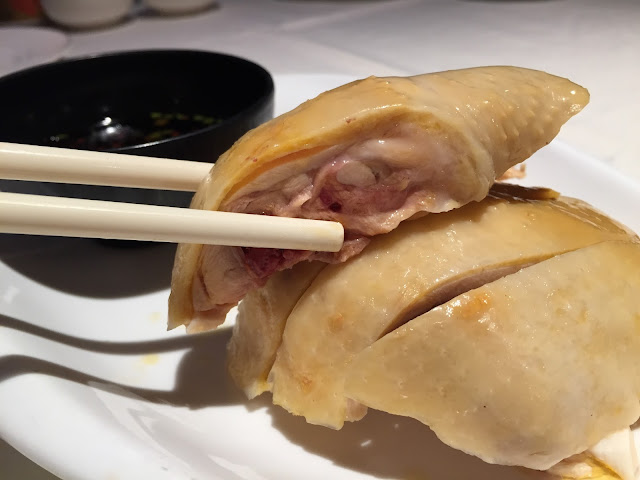 Served as a cold dish, the steamed chicken came with soy sauce, Chinese parsley and grated ginger. The chicken was tender and succulent with a layer of jelly-like fats between the skin and flesh. When dipped into the soy sauce, the sweetness from the meat was further enhanced. It was an absolutely delish appetiser to start a great meal. (Food rating: 3.5/5) 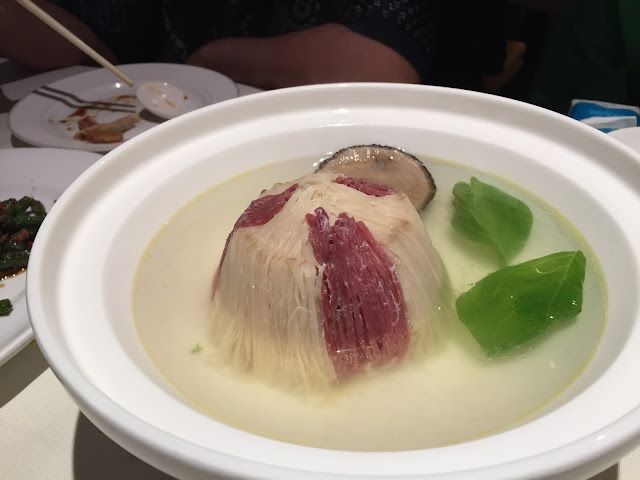 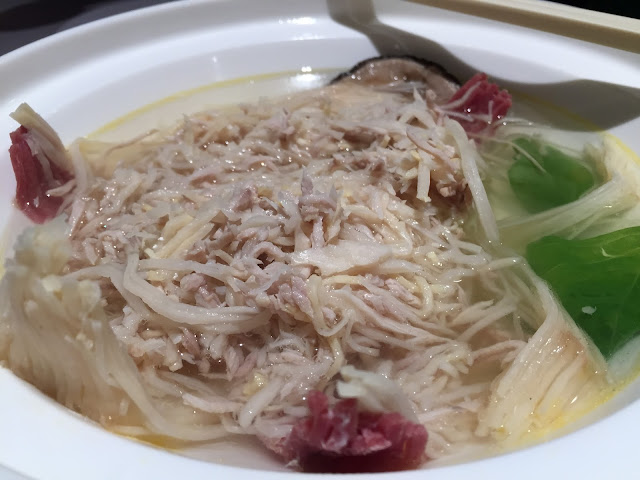 Limited to 15 quantity per day, the stewed three shreds comprise strips of Chinese ham, pork and bamboo shoots. The three shreds were then cooked in rich pork broth. Though Shanghainese food is known for heavy taste particularly nectarine dishes, this dish was light and great for those who are not used to the local dishes. The three ingredients were cut into thin strips with equal thickness. The presentation was too beautiful to destroy to boil the ingredients. (Food rating: 3.5/5) 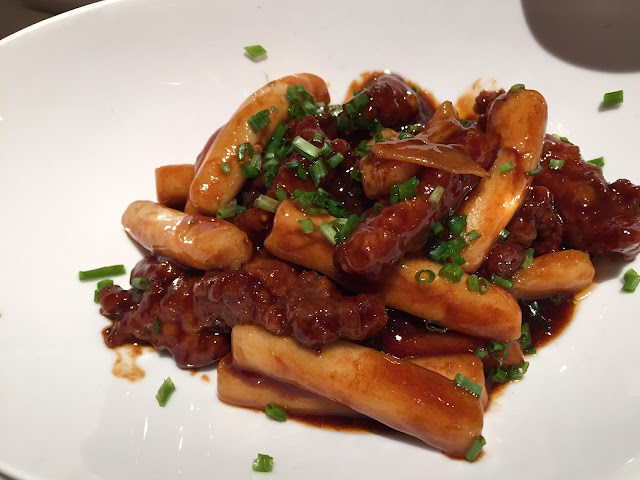 Instead of the famous Korean Tteobokki (Spicy Stir-Fried Rice Cakes), the fried rice cakes with spare ribs were sweet. Made using pork ribs and rice cakes, the dish was then cooked in honeyed sauce. The rice cakes have soft chewy texture that were delightful. The spare ribs were mixed with a thin layer of batter before they were deep fried. The pork slices remained tender and easy to eat. Due to its saccharine sauce, the rice cakes and spare ribs could not be eaten on its own without eating it with steamed rice. The steamed rice balanced out strong sweet taste, making it delectable. (Food rating: 3.5/5) 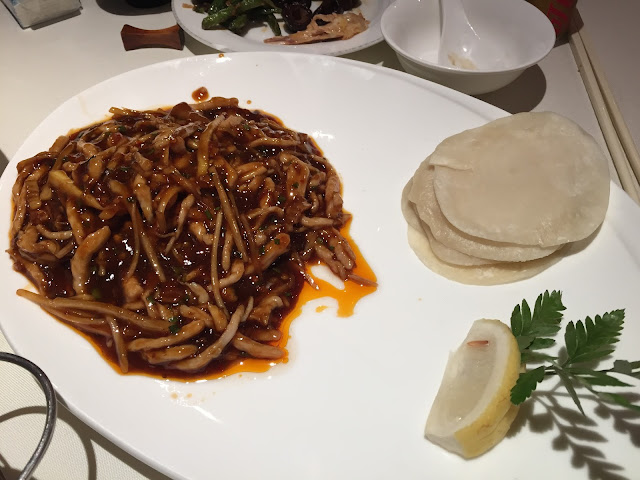 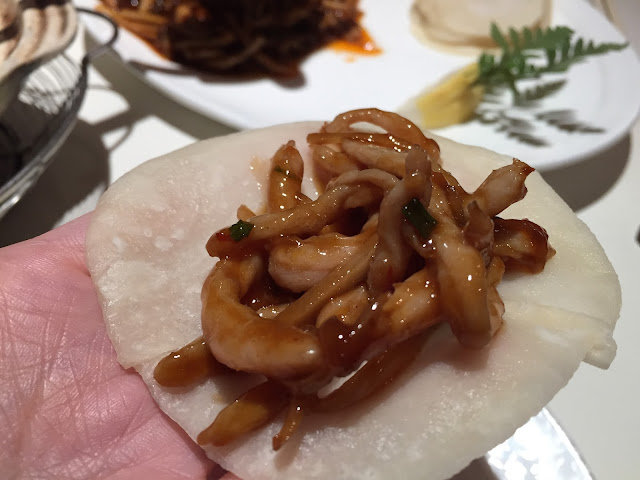 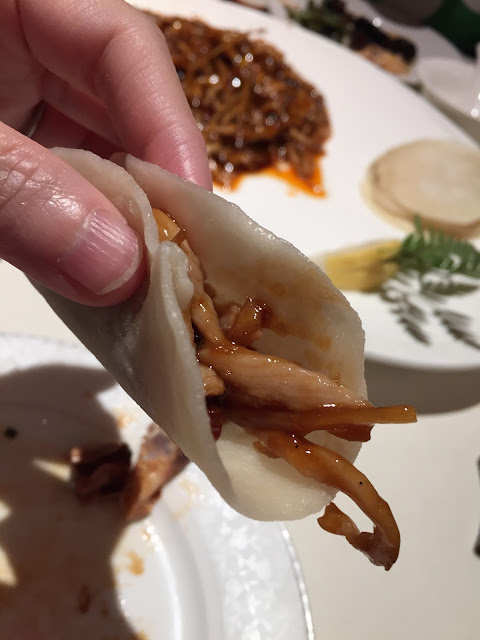 Pork strips in fish flavour with wraps [鱼香肉丝夹饼], RMB 58 is made of pork strips and bamboo shoot strips.

Legend says that this dish was prepared when a homemaker used the leftover oil from cooking fish to cook the pork slices. The fishy taste from the oil made the pork strips dish both savoury and addictive. Came with wraps, the pork strips could be wrapped and eaten like Peking Duck wrap. Likewise, the dish could also be eaten with steamed white rice, which was a great complement. (Food rating: 3/5) 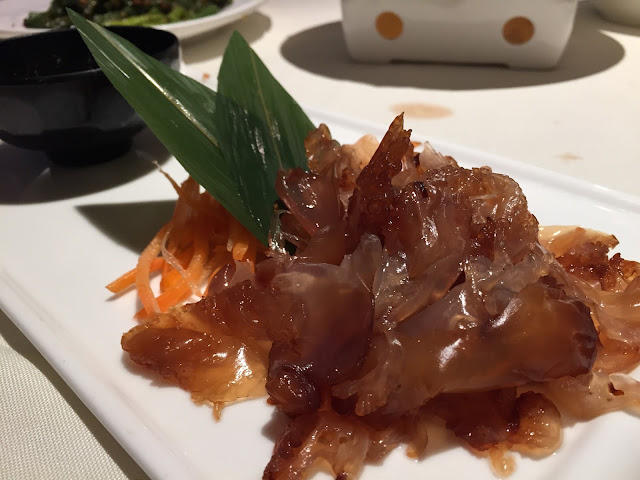 Cut into thin strips, the jelly strips were crunchy in texture and was nothing to rave about. Though the menu stated that the sauce was sesame oil, it actually tasted like vinegar. (Food rating: 2.5/5) 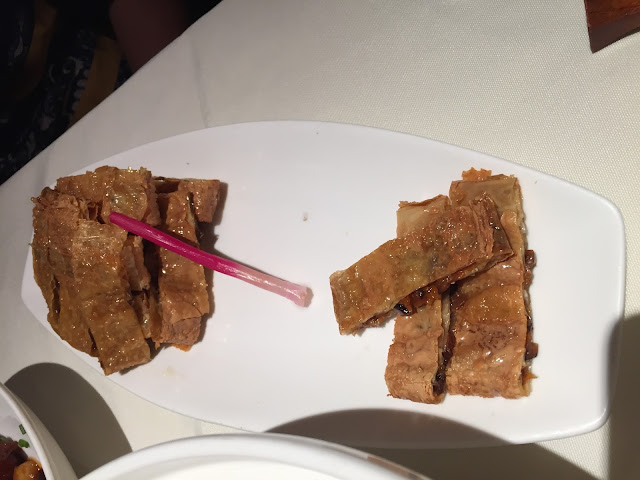 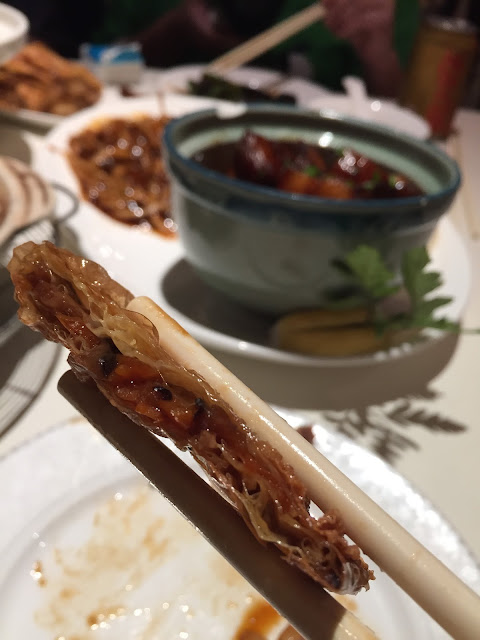 Crispy Vegetarian Duck [脆卤素鸭], RMB 25, is made of vegetarian duck, shiitake mushroom and carrot strips. The diced shitake mushrooms and carrots were wrapped with dried soy skin. The wrap was then deep fried to golden brown crisp. The soy skin emitted a very nice fragrance. Its lightly salted skin with sweet mushroom and carrot mixture were perfectly. It was a multi-sensory experience - smell, taste and presentation (sight). (Food rating: 4/5) 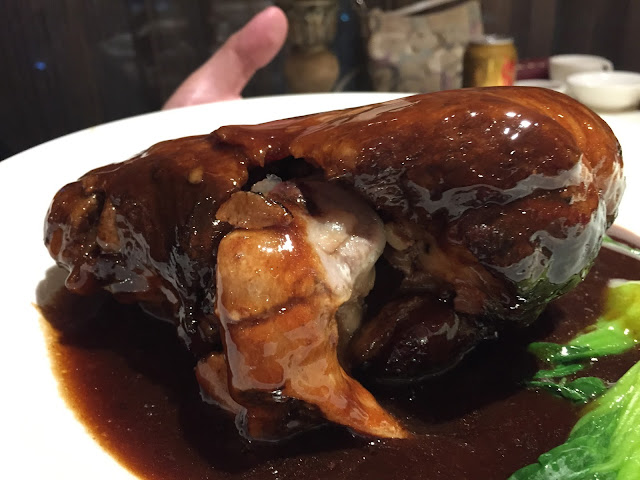 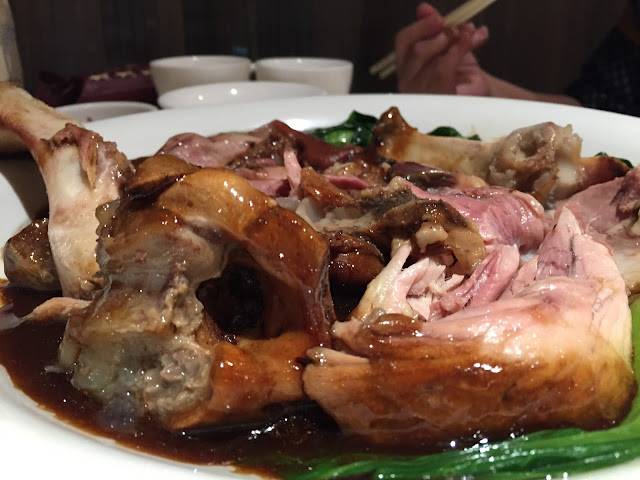 Simmered for long hours, the pork trotters were soft and juicy. The meat was easily removed from the bones and the bones were white, indicating that they were freshly prepared. The brown sauce was honeyed and I propose removing the brown sauce on the meat. It would make the dish more delectable. (Food rating: 3.5/5) 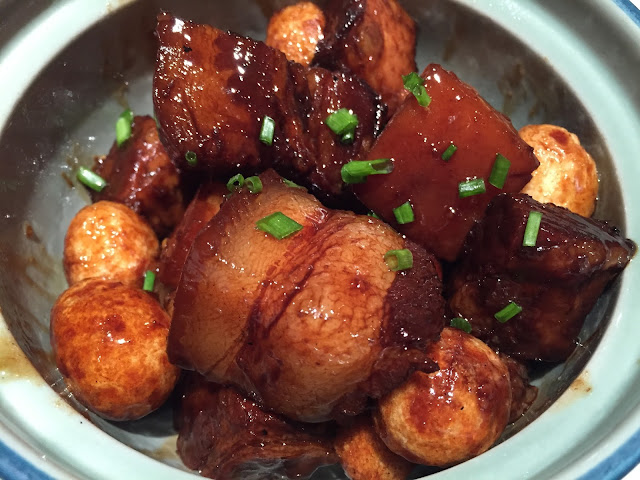 One of the more popular dishes, the braised pork [红烧肉] uses pork belly as the main ingredient and is cooked and simmered in claypots. It is renowned for its sweet taste. This dish is one of the famous Shanghainese local food, where its signature dish emits the key characteristics of oily and rich sauce [浓油赤酱]. The braised pork originated from the famous poet - Su Dongpo.

At Classic Restaurant [老克勒上海菜], the pork belly exhibited three beautiful layers - skin, fats and lean meat. The pork belly cubes were extremely tender and succulent, and the hard-boiled quail eggs were deep fried. The brown sauce was very rich and heavily honeyed. The pork cubes were simmered in long hours that they became very soft and tender, making it enjoyable. However, the honeyed sauce was too sweet for diabetics and people who do not take sweet foods. I, for one, do not take sweet foods. (Food rating: 3/5) 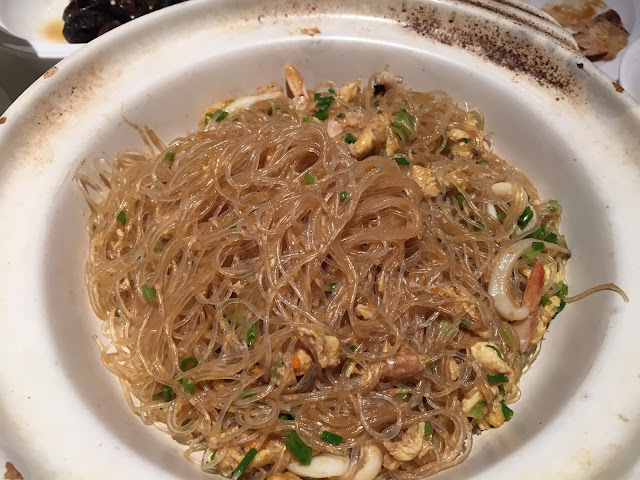 Cooked with bean vermicelli, eggs, crab roe, squid and fish, diners can taste a mild seafood fragrance from the dish. Do wait for the noodles to cool down as the vermicelli becomes more chewy, making it even more palatable and enjoyable. Compared to the same noodles from Grandma's Home restaurant and Promising restaurant, this noodle dish was more bland, giving diners a different perspective and uniqueness. (Food rating: 3.5/5) 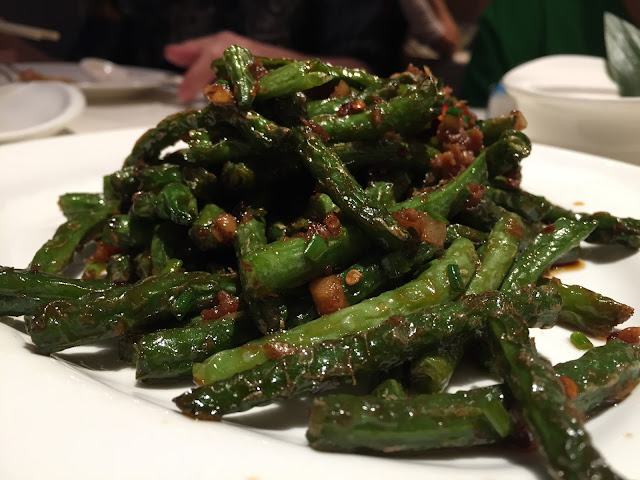 After the introduction of the meat dishes, the stir-fried long beans was yummy. The long beans were first quickly deep fried to give that crisp and crunch. The greens were then stir-fried with minced pork, dried chilli, salt, chicken essence, sugar and Chinese cooking wine. The greens were crunchy in texture and sauce was both spicy and sweet. It was very delectable and complemented very well with steamed white rice. A great greens to accompany the entire dinner. (Food rating: 4/5) 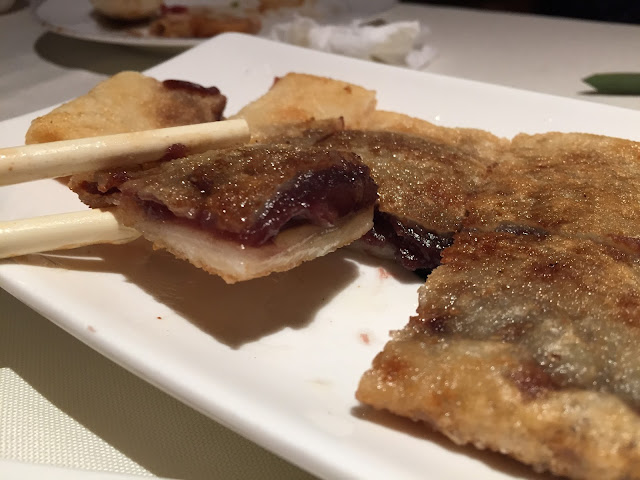 The fried red bean pancake is a great savoury dessert to end the meal. Made from flour, egg, milk and red bean paste, the dessert was a savoury, yet sweet snack that was enjoyable to many. The frying of the red bean pancake requires great skill. The oil must be at a certain heat level and the amount of oil is of upmost importance. Too much oil will make the pancake mixture absorb too much oil, making it dense and a strong oily taste.

The pancake gave two contrasting taste experiences. The pancake was very oily and not properly drained when served. The surfeit of cooking oil seeping from the pancake made us sick after a couple of mouthfuls. The red bean paste, on the other hand, was overwhelmingly sweet. The dessert failed to end the meal with a happy note as it was not enjoyable at all. (Food rating: 2/5) 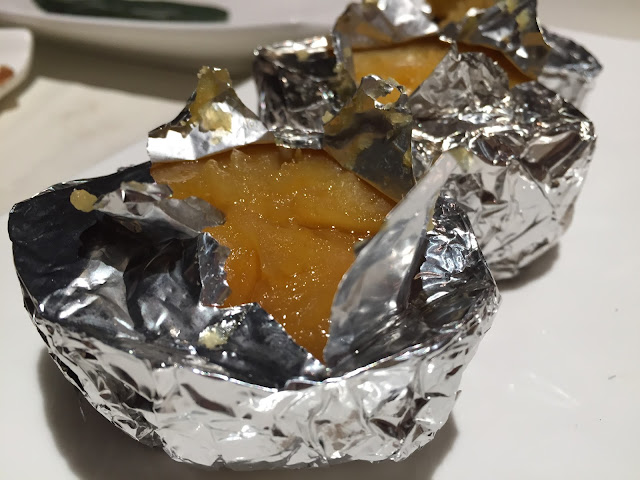 The steamed sweet potato cubes were nicely presented when they were served. However, they tasted unusually sweet. Came in three cubes, each cube tasted different. One was dry and mildly sweet. The other two was very sweet and very moist. It is either the sweet potatoes were naturally sweet or sugar syrup was added into the potato, making it moistly sweet. (Food rating: 2/5)
We ordered a total of 13 dishes at RMB715 for four pax. Each pax cost SGD39. 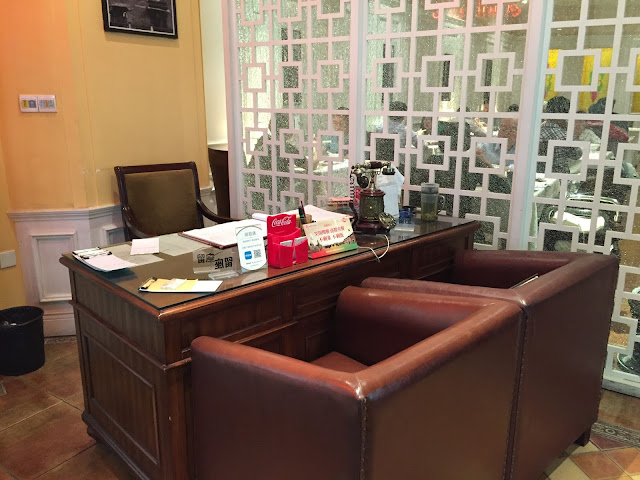