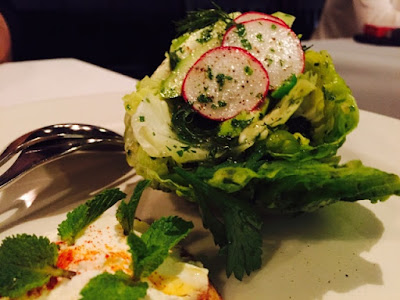 Oysteria Mozza is a celebrated restaurant by Mario Batali. With 18 restaurants, eight cookbooks and a host of television shows, including the ever-popular Iron Chef America, Mario Batali is one of the most recognised and respected chefs working today. 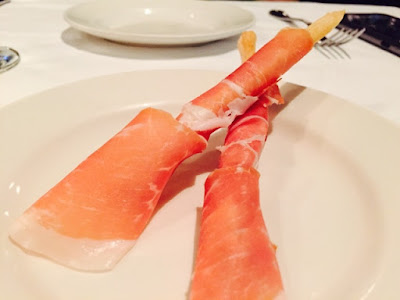 The waiter wants to talk about the menu. Orders placed, you get two servings of smoked meat with butter breadsticks. The smoked meat was thinly sliced, and the breadsticks shattered on impact. The rich butterytaste exploded into your mouth, together with the lightly salted smoked ham. In five minutes, you want another serving. But you can just have one. (Food rating: 5/5) 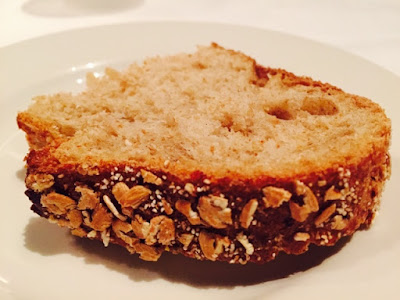 When the bread basket of a selection of sour dough and wheat breads arrived, you know that the complimentary breadsticks and smoked ham was a preview of what's in store. You get a small slice of wheat bread, cold. The crust was too tough to tear apart; the insides were too chewy. In five minutes, you had enough and will not want to have another slice. I preferred my bread to be served warm. (Food rating: /5) 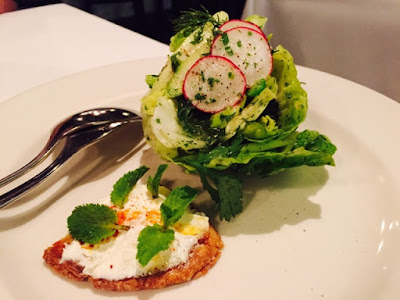 There is the Little Gem Lettuce with English Peas, Asparagus and Labneh toast. The lettuce was drizzled with vinaigrette and herbs, giving it a nice aroma and citrus taste. The toast topped with Labneh or strained yogurt gave a light and creamy taste that you want more. The English peas was amazingly aromatic. It had a nice nutty taste that it remains in your mouth even after you have swallowed it. It was absolutely divine. (Food rating: 4.5/5) 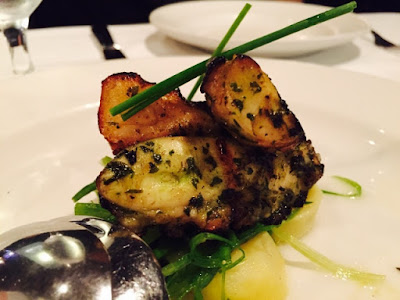 The Grilled Octopus with potatoes, celery and lemon was unforgettable. The octopus was grilled very well, charred on the outside and chewy in the inside. The potatoes were firm and flavourful. The seafood was drizzled with lemon juice that it was a superb appetiser. Every bite was ambrosial, the freshness of the octopus and its taste exploded into my mouth as I chewed it continuously. (Food rating: 5/5)

From the Mozzarella Bar 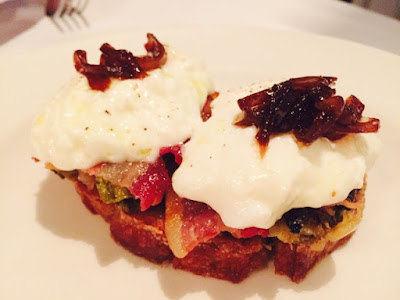 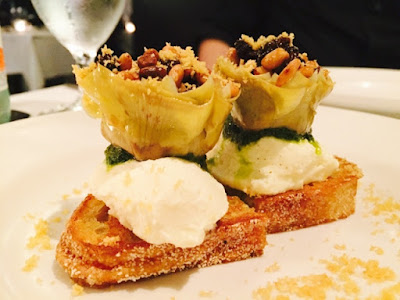 Ricotta with braised artichokes, pine nuts, currants and mint pestos was very unique. Ricotta is a fresh, soft, Italian cheese with a small curd and a light, mild flavor. The braised artichoke has a nutty flavour and crunchy texture. Overall, the appetiser was crunchy, has a sour and mildly cheesy flavour. (Food rating: 4/5) 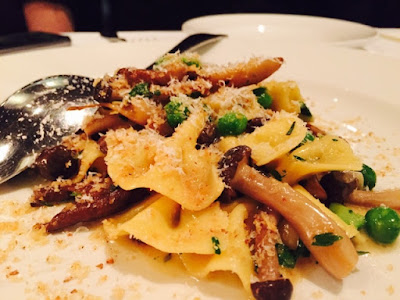 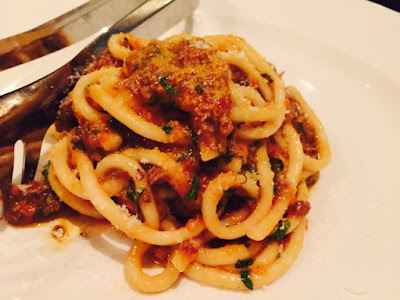 Pici with duck ragu had a richer taste than Farfalle wild mushrooms, English peas and walnuts. The pasta was thick, hand-rolled pasta, like fat spaghetti or Udon. Originated in the province of Siena in Tuscany, the dough is typically made from flour and water only. The duck meat sauce was rich and had a gamey aftertaste. Pici, on the other hand, had a nice chewy taste, which was very enjoyable. (Food rating: 3/5) 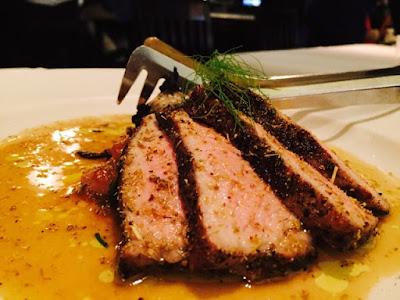 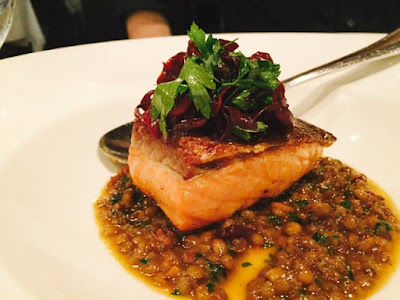 Imagine that you are having fish today, the fish was cooked to perfection with nice crispy crackling skin. The Sea Trout with Umbrian lentils and red cabbage sottocetto were a superb combination for your mains. Though the fish was awesome, I was a little affected by the mild fishy taste on the skin. (Food rating: 4/5) 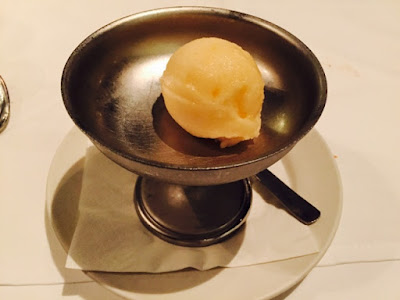 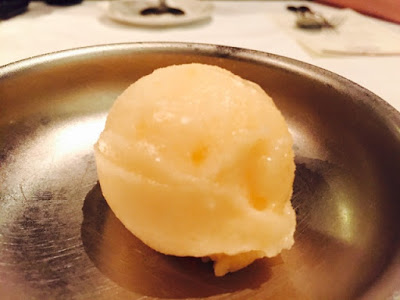 As a palette cleanser, the Melon Sorbetto was awesome. The rich rock melon aroma retains in the sherbet as if it was compressed to retain its essence. (Food rating: 4.5/5) 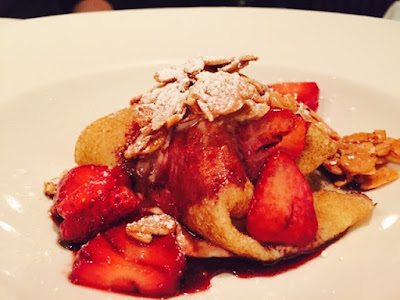 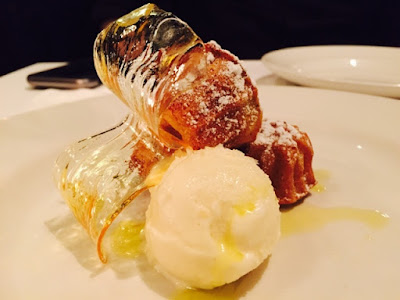 
The duration of the food tasting menu was two hours. As we went there after work, we find it exhausting. In the middle of the dinner, we became restless as exhaustion set in. Despite that, we still had a superb dining experience at Oysteria Mozza.

Address: 2 Bayfront Avenue, #B1-42/46 The Shoppes at Marina Bay Sands, 018972
Price: $$$. The entire meal costs SGD 315, which includes two $128++ tasting dinner menu and a bottle of still water.
Rating: 4/5
Stuffness level (how full you are): 5/5
Atmosphere: The restaurant has a nice cosy interior with ample space between tables. The table set up was simple with white table cloths. The servers were friendly and very attentive. I accidentally dropped a food onto the table but the server picked it up and covered it with a white napkin, making the table clean and white again. Though it looks extravagant, I reckon it is the high price you pay for the meals that accompanies this great service.
Recommended dishes: Grilled Octopus, Iberico Pork Chops, Farfelle with wild mushrooms, Burrata with bacon.
$$$ Celebrity Chef Restaurant Famous Restaurants Italian Marina Bay Sands MRT: Bayfront Oysteria Mozza pasta seafood Singapore
Location: 10 Bayfront Avenue, Marina Bay Sands, Singapore 018956