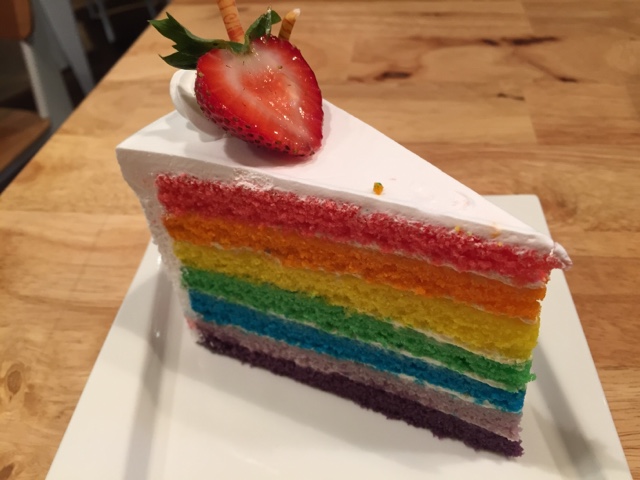 
I recently met a friend there for lunch at 1pm and was able to get a table very easily. The restaurant was quickly filled up within the next 15 mins. We ordered two lunch sets and a slice of cake for dessert. We could choose to top up S$3.80++ and complete the meal with a choice of soup or salad as well as a glass of ice lemon tea.

The entire meal for 2 pax cost SGD53.00 that left dissatisfied and regretful. 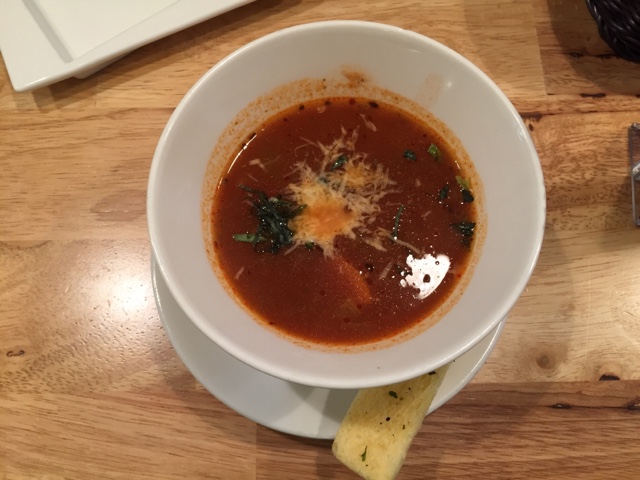 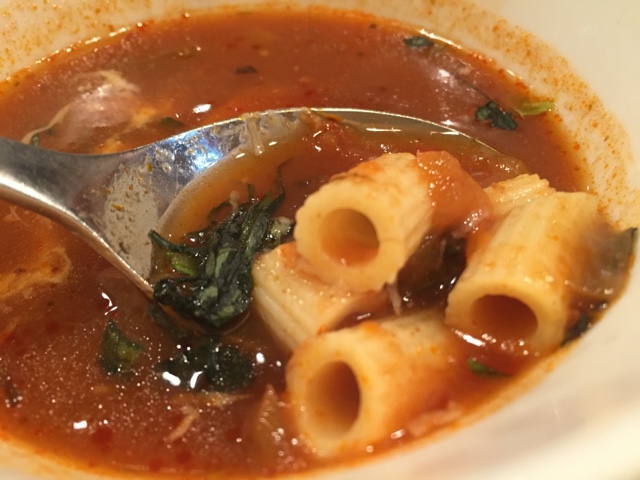 The minestrone soup that came with the set top-up was delicious. I liked the sweet tomato broth with herbs. The soup had a nice fragrance that you had to keep drinking it until it was gone. The pasta were cooked in al dente style and all ingredients were perfectly cooked. It was extremely enjoyable, but nothing to rave about. (Food rating: 2.5/5) 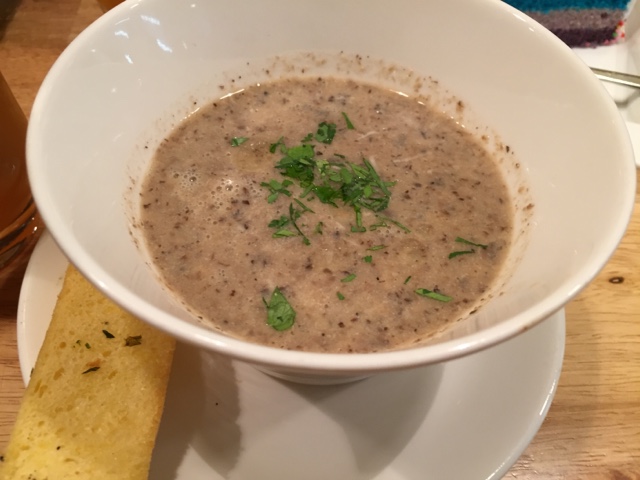 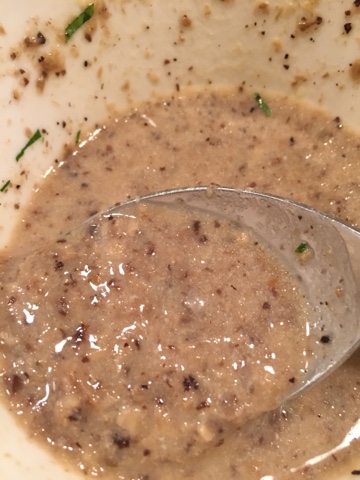 Also, with the set top-up, the cream of mushroom tasted very crunchy and rich. The mushroom were crushed into bits, which made the soup look like vegetable puree. But the soup was somehow salty. Be prepared to drink lots of water after the meal. (Food rating: 2/5) 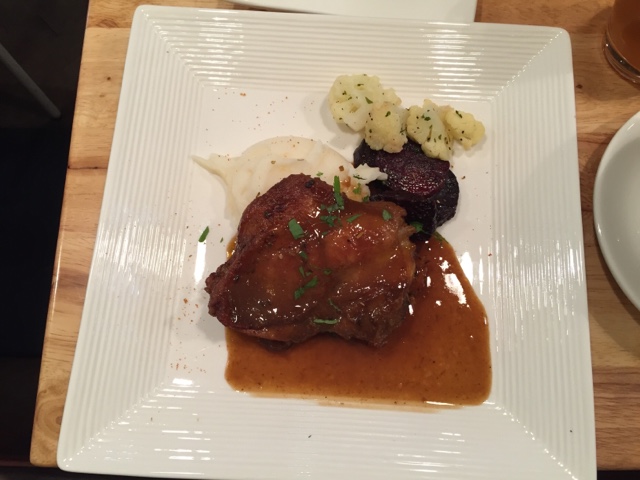 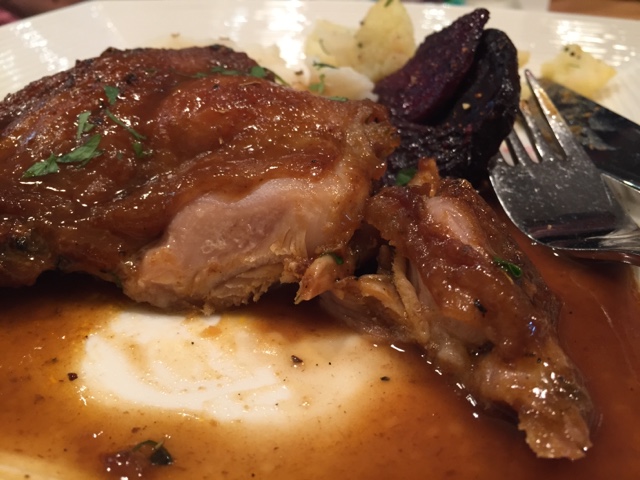 The Herb-baked Chicken Thigh with Mashed Potato and vegetables were today's special at S$15.80. The chicken was very tender and very easy to cut using a cutlery knife. The skin was beautifully roasted and had a nice golden brown colour. However, it tasted salty, with or without the strong brown sauce. With the brown sauce, the saltiness intensified. The mashed potato was very smooth but subtle. Maybe the mild mashed potato was to compliment the chicken and brown sauce. The dish made you feel thirsty throughout the meal. (Food rating: 2/5) 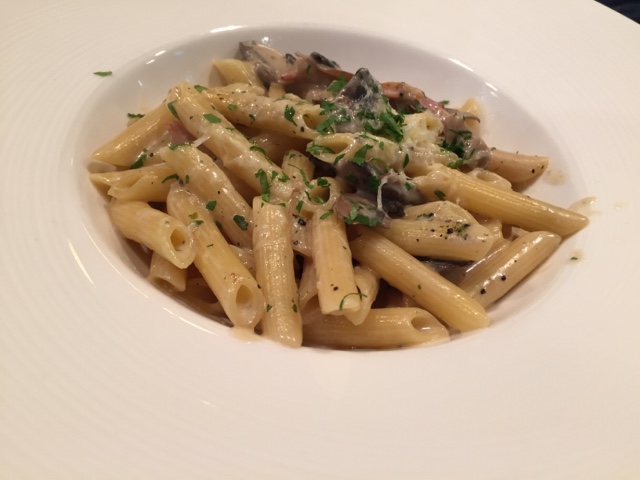 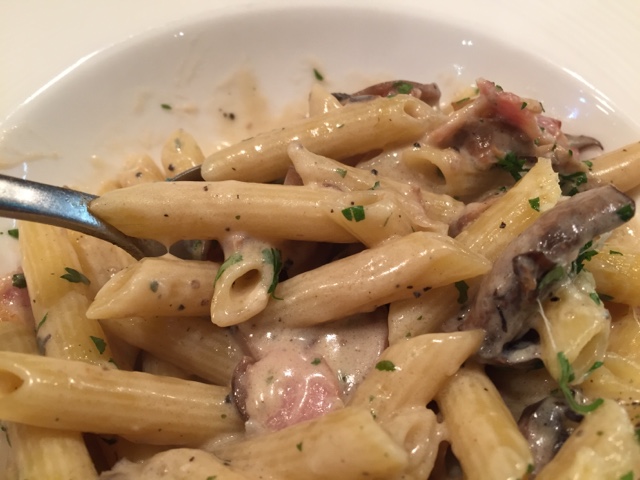 Bacon & Wild Mushroom Carbonara (S$13.80) comprised penne pasta, bacon slices and cut wild mushrooms. The carbonara sauce was rich and creamy, but salty. The al dente style penne pasta, bacon and mushrooms were tossed into the creamy sauce. Overall, the pasta was fine. But it became more and more briny as you continued the meal. The saltiness was most likely came from the bacon, which was usually salty on its own or the pasta was not properly rinsed with water. Too salty for me. (Food rating: 2/5) 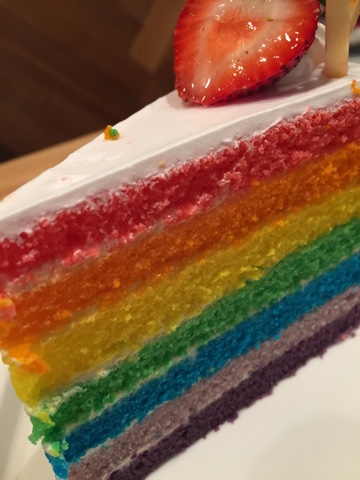 Priced at SGD7.90, it was love at first sight. The multi-coloured cake had a very nice presentation that often than not, many females had bought slices during the period I dined there. Aesthetically, it did look very enticing but texturally, it was a disappointment. Though every layer tasted different, the texture was coarse and flaky. The flavours (from top to bottom) were: Strawberry, Orange, Lemon, Lime, Blueberry, Grape, and Grape again?

The total cost was subject to 10% service charge and 7% Goods and Service Tax.