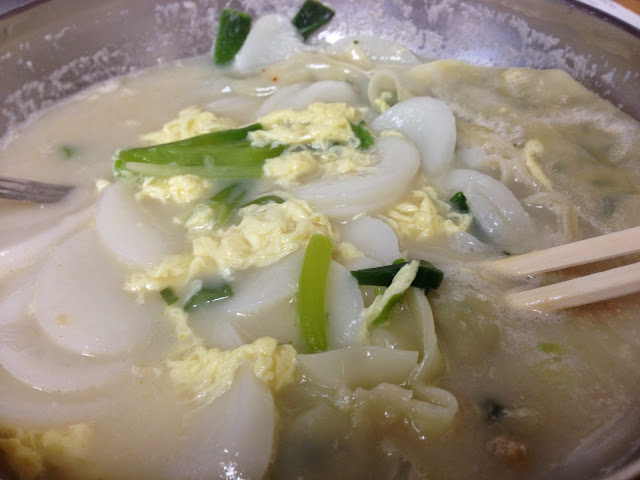 Today, we had strong cravings for Korean food and went to the food joint in H Mart along Northern Boulevard. The temperature was about two degree celsius this evening but felt like minus one degrees. It was so cold that we wanted to have something soupy and hot. So, we ordered three different dishes to try this time.
The first two dishes were hot soupy stuff but the last one we ordered a spicy cold noodles which raised eyebrows from the cashier lady. She looked surprised and asked me twice if I am sure. With strong affirmation, I told her that I wanted the noodles. She shrugged and took my order.

Apparently, people do not order cold dishes during cold weather but we were the odd ones who did.

We spent a total of USD22 which we regretted for ordering three dishes. Two dishes were enough for each of us. We were too greedy. =P 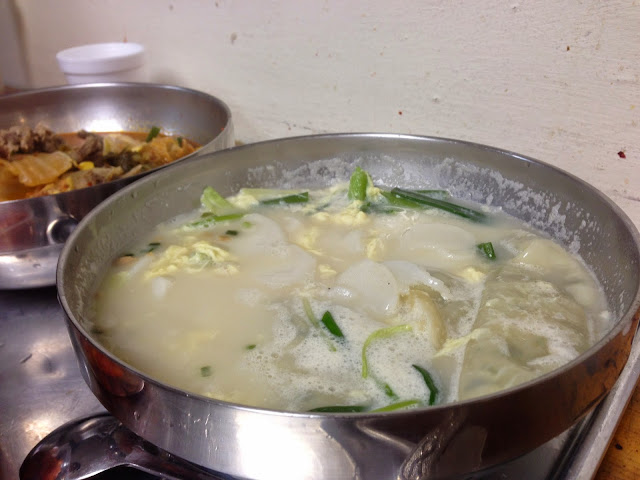 Duk Mandu Guk (Rice cakes and dumpling soup), priced at USD7, used beef-based broth, beef filling dumplings and sliced rice cakes. It was traditionally served during the Korean Lunar New Year. Though the bowl of soup looked very plain and simple, the beef broth was sweet and flavourful. The beef dumplings were slightly overcooked but they were still delicious. I could eat the beef bits from the dumplings. The rice cakes were chewy. It was delicious and the hot soup warmed the cockles of my heart, especially in a cold weather like today. (Food rating: 3/5) 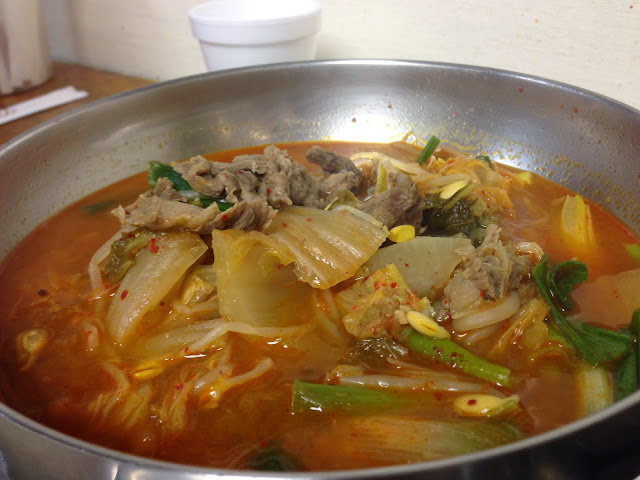 Beef Tang (Beef Stew), priced at USD8, was cooked with seasoning, white lettuce, leeks, bean sprouts and beef slices. Though the menu stated Beef Tang, I suspect that its korean name was Yukgaejang (Spicy Korean Beef Stew). If it did, a story was told that Soon Jong, the last king of the Chosun dynasty ate this dish when he was in despair. At that time, King Soon Jong was forced to give up his sovereign power when Japan invaded the country. Then his royal chef served him this spicy beef stew to remind the king what he was forgetting.

Apparently, there were key four ingredients in the soup and he understood what each ingredient represented.

1. The beef represented the people in Korea who worked hard and royal to their king, just like the Korean cows which were devoted to its master.

2. The spiciness from the chillis represented the strength of his people

3. The fiddleheads represented how much his people desire independence and freedom from the Japanese. The fiddleheads were young stems of wild fern which grew fast despite harsh environment.

4. The taro (yam) stems represented his people would fight to regain their country. The taro stems were believed to fight and withheld its life against many diseases.

For the beef stew, my friend and I loved the soup very much. The spiciness were just nice and the beef slices were tender. There was a subtle fragrance in the soup that was addictive. The vegetables, especially the white lettuce, were cooked until they were soft and easy to eat. The vegetables were well soaked in the spicy broth. We kept attacking the stew non stop and ate it with rice until the bowl was empty. (Food rating: 3/5) 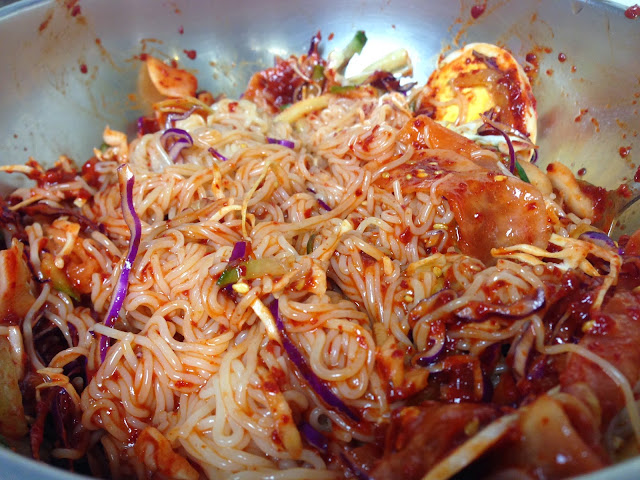 Bibim-naengmyeon (Cold spicy mixed noodles), priced at USD7, was made of cold chewy buckwheat noodles, topped with shredded cucumber and red lettuce, in red pepper paste. This dish was usually enjoyed during summer.

I recalled my mouthwatering experience eating cold buckwheat noodles in Richmond, California and wanted to eat the delicious noodles again. When we ordered this dish, the cashier was surprised and checked with us twice. It was usually rare that people would order cold dishes during cold seasons. I remembered that the spicy chinese cold noodles (凉粉) was removed from the menu when I was in Hangzhou and Shanghai recently. During that time, the weather has turned cold and people would want to eat hot food rather than cold food.

When the Bibim-naengmyeon was ready, I collected the dish from the serving counter. The pale noodles were chewy but I wondered if they were buckwheat noodles.  The mixed cold noodles, though chewy, lacked the spicy and sweet flavour. Somehow, it lacked the aroma and heavenly flavour. Compared with KimChee Tofu House, this noodles had more ingredients and yet lacked the aromatic taste. It was quite a disappointment. (Food rating: 2.5/5) 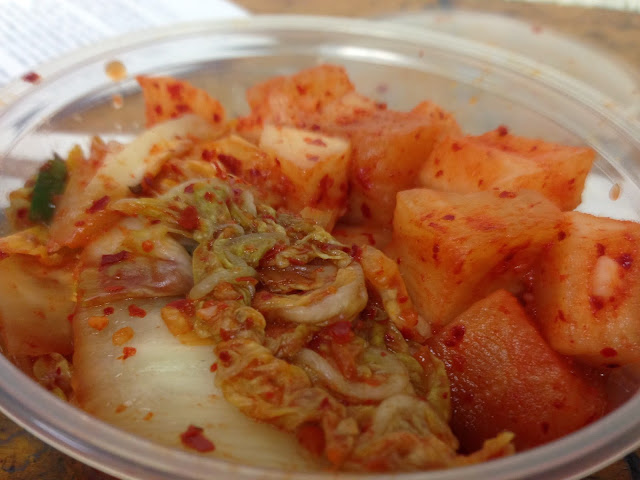 Each dish was served with kimchi. The kimchi were normal. 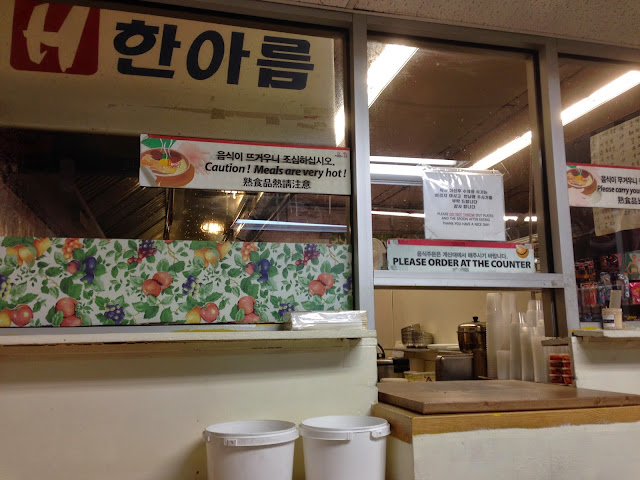 This was a self-service restaurant within the supermarket. The interior was a minimalist design with the basic benches and wall tables for people to eat. After eating, we would need to return the utensils to the counter and throw any residual rubbish.