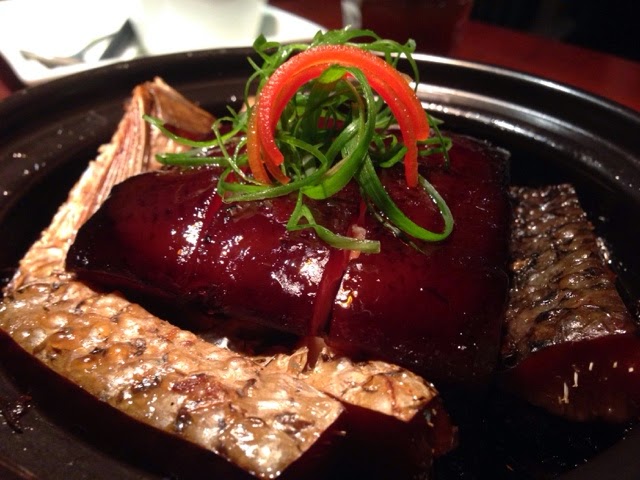 On our first day in Hangzhou, we decided to have lunch at the highly recommended restaurant chain - Waipojia (外婆家). The nearest restaurant outlet was about ten minutes walk from the hotel. As we walked towards Hangzhou Tower City Shopping Centre along Huancheng North Road and found the place very quickly. The restaurant opens at 10.30am.
We arrived at 10.45am and there were already customers in the restaurant. Without any hesitation, we entered the restaurant and started to order food. When we looked through the menu, we were spoilt for choices. There were so many delicious foods that we wanted to try.

Waipojia was like Singapore's Crystal Jade, Paradise and Imperial Treasure group of restaurants. This popular restaurant chain was located almost everywhere in Hangzhou.

We had a wonderful dining experience at Waipojia. The total damage was RMB200 (SGD40) which was absolutely worth it.

Grandma's Pork (外婆红烧肉) comprised of salted fish and pork belly. Priced at RMB 45, this dish is 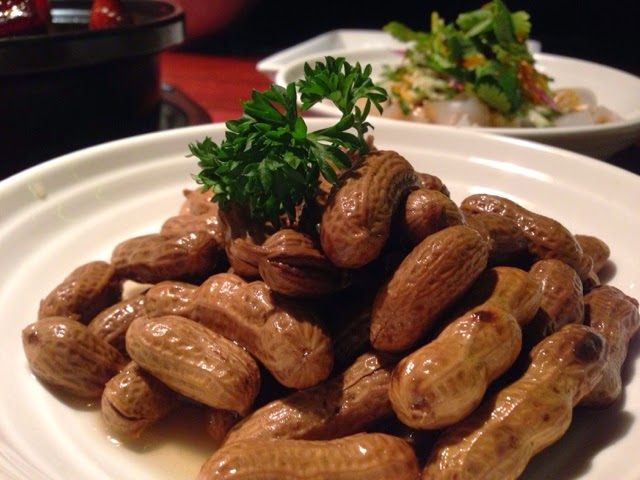 Multi-spiced Peanuts (五香花生), priced at RMB 6, were simple appetisers that you could start first while waiting for the mains. These chilled peanuts had subtle yet fragrant spices that were delicious. It was a delight eating this whilst waiting for the mains to be served. (Food rating: 3/5) 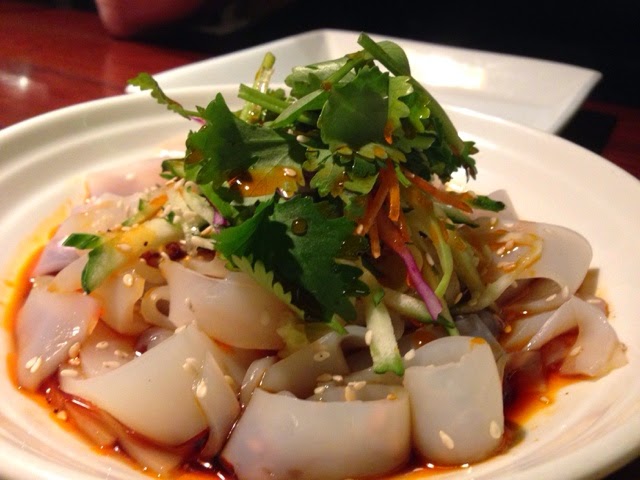 Noodles with cold sauce (西子凉粉), priced at RMB8, was very similar to the 凉皮 served at Jin De Lai. The only difference was the texture of the flat rice noodles. The noodles at Jin De Lai were more chewy than Waipojia's. Both sauces, though similar, were still refreshing and spicy. Even the textures of the noodles were different, every slurp of noodles was still refreshing. (Food rating: 4/5) 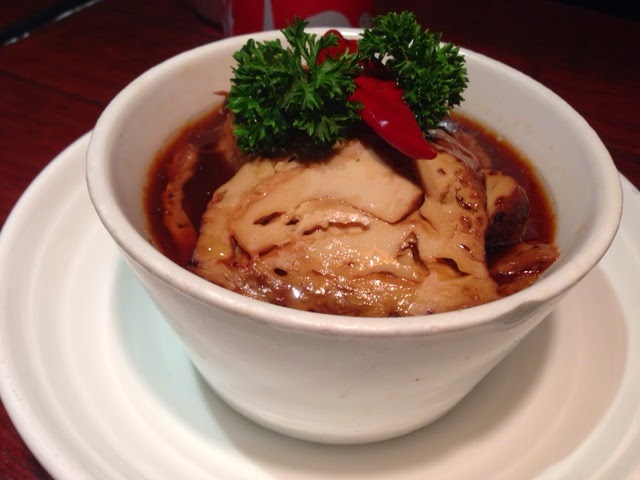 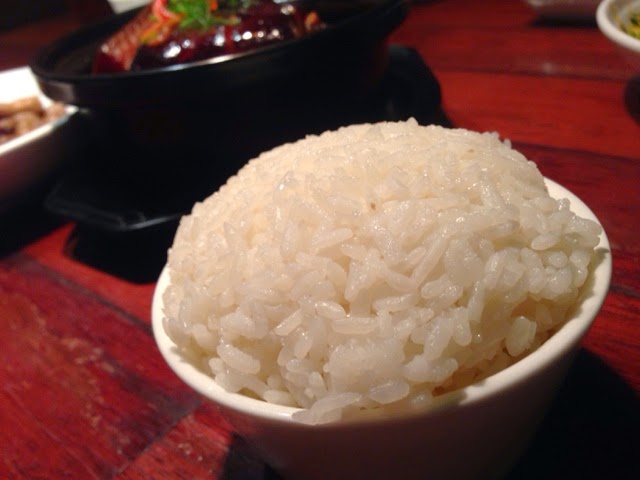 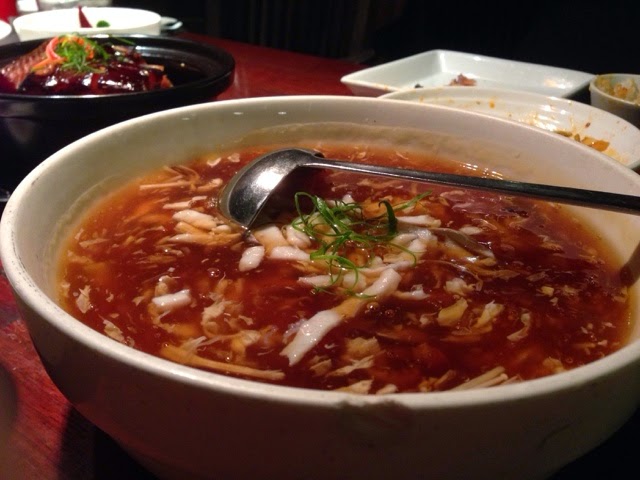 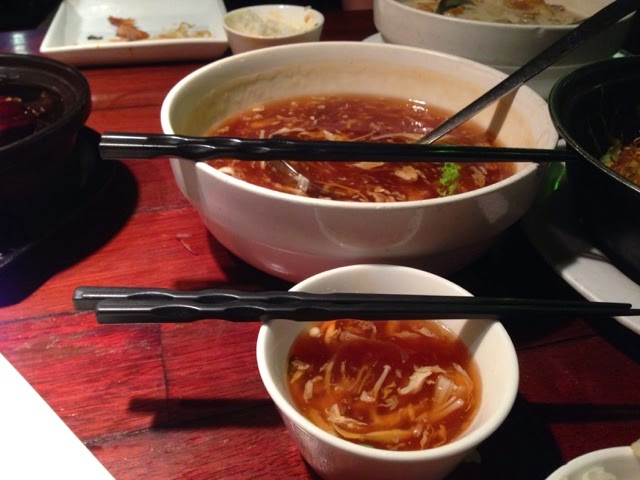 Southern Song Dynasty Fish Soup (宋嫂鱼羹), priced at RMB 18, is one of the renowned traditional Hangzhou cuisine. The soup comprised fish slices and egg flower. It tasted as good as crabmeat soup with glossy colours and creamy in taste. The only problem was that the portion was too big for two persons. I could say that it was best for at least four persons. The two of us had to struggle finishing the soup. The fish slices tasted very nice and I could taste its freshness. (Food rating: 4/5) 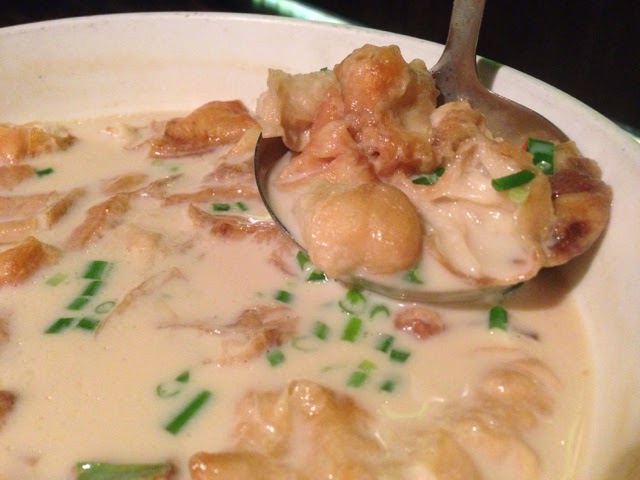 Shrimp with Deep-fried dough sticks and Milk (豆浆油条汤), priced RMB 15, was an interesting dish. It was my first time to try a dish with milk and fried dough fritters. Thinking that it was a portion for one, I ordered a bowl. When it was served, the soup was filled with a lot of cut fried dough fritters. Soaked in the milk soup, the fried fritter became soggy, making the food less appetising. However, the milk has a subtle soymilk aftertaste. The fact that I already had bowls of the fish soup earlier, I would have more portions of this soup. (Food rating: 3/5) 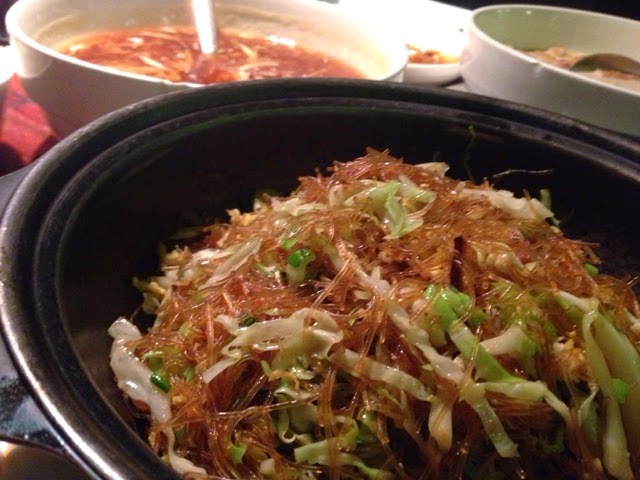 Vermicelli (腊味炒粉丝), priced at RMB 18, was one of my favourite Hangzhou cuisine. I remembered vividly eating the delicious noodles when I visited the city last year. This dish looked very simple, yet its fragrance aroused all my senses. The vermicelli or Tang Hoon was translucent and shiny. Unlike the vermicelli we had at home, the diameter was about a third of it. It was as if it was a thread. From the list of food, you can see that we have ordered way too many foods. We took a few mouthfuls of the noodles and packed it back.

A couple of hours later, the noodles were still very fragrant and delicious. I had it for dinner. A word of caution – do not keep the food for too long as the oil taste will become overpowering. (Food rating: 4.5/5) 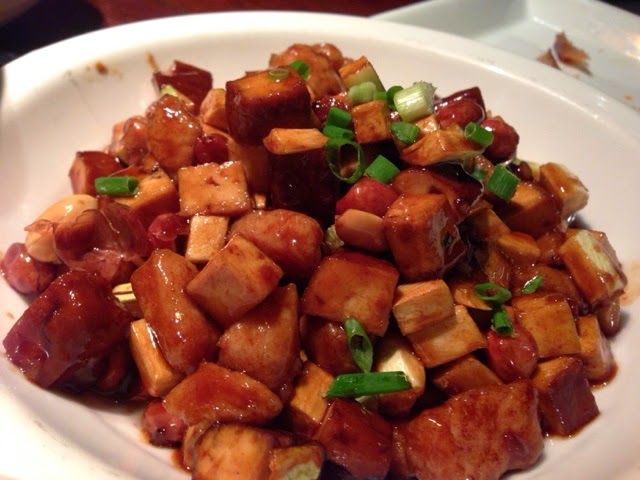 Chicken cubes (杭儿酱丁) comprise chicken cubes with beancurd cubes. The pork and beancurd cubes were very tender. The sauce was very subtle but delicious. This dish will be best eaten with rice. (Food rating: 3/5) 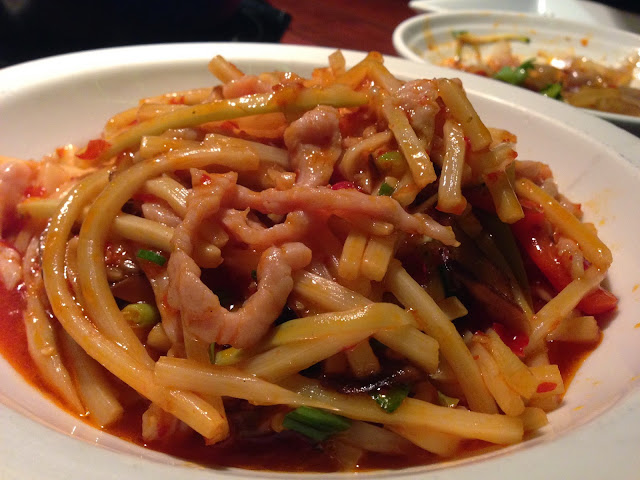 Shredded Pork in Fish Sauce (鱼香肉丝), priced at RMB 18, was not the same as the one I have eaten at Jin De Lai. This dish at Waipojia was redder and the taste was more subtle. There were more bamboo shoots than meat in this dish, not that I prefer meat. I thought it would be better if it were more balanced. The fish sauce had a stronger vinegar smell and somehow it was less enticing. A friend told me that its name - 鱼香肉丝 was derived from the extra fish sauce cooked in meat slices. The story went like this. This Sichuan sauce was originally cooked with fish. Apparently, it was said that the dish was accidentally discovered. Once, there was a homemaker who found wasteful to throw away ingredients to cook the fish. So she replaced the fish with the meat, thinking that her husband might not taste the difference. (Food rating: 3/5)