August 10, 2014
Located at the National Museum of Singapore - the nation's oldest museum, the Food for Thought will give you a palatable treat. The restaurant shares a variety of local delights - a combination between old and new. You will never realise that there could be more than one way in preparing the same local delight with similar tastes.

I was visiting the Museum one weekend and met a friend at Food for Thought for afternoon tea. Even though there was another outlet at Queen Street, the selection of food was a little different. It offered local Singaporean food that would bring fond memories of the past. For instance, the bandung drink made of rose syrup and milk. The food was selling at an average of S$10.00 per item which I thought was fairly reasonable, considering the location, ambience and service. 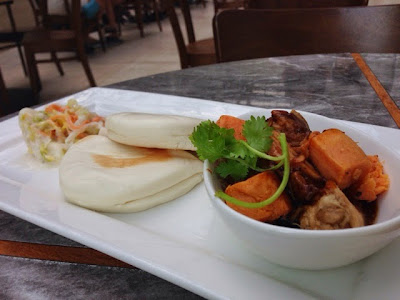 If you have tried or eaten Westlake's Stewed Pork Belly (Kong Bak Pao) wrapped with Steamed Bun, you will also like this. The Slow Roasted Hoisin Har Cheong Pulled Pork was cooked with roasted sweet potatoes and then served with creamy wongbok slaw (similar to preserved vegetables) and steamed bun. I placed the pork on the opened bun, added the slaw and parsley in it, and closed the flap of the bun. The bun was astonishingly delicious. The slaw and parsley enhanced the pork's fragrance. It was extremely mind blowing. The roasted sweet potatoes was equally good. The orange cubes were perfectly roasted that they merely melted in your mouth. (Food rating: 4/5) 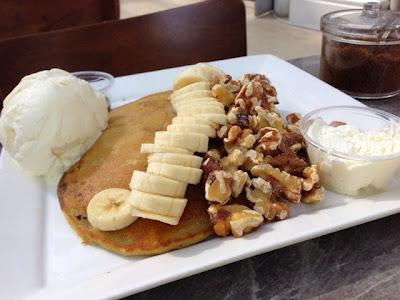 Whenever I have tea with my friends, I never fail to order some desserts. This time, I ordered for us Pancakes. The pancakes were serviced with fresh vanilla cream, spiced gula melaka syrup, banana cubes and roasted walnuts. From a look, it thought I was at iHop having a serving of its pancakes. The gula melaka syrup or brown sugar syrup was an easy substitution of the usual maple syrup. Inside the pancakes, there were already bananas and walnuts. Then, there was a generous toppings of more bananas and walnuts. What I loved about the dish was the soft pancakes. I ate it with a little syrup, cream and banana cubes. It was nice but I thought that it was a little ordinary. After the first dish, I was waiting for another 'miracle' food. (Food rating: 3/5) 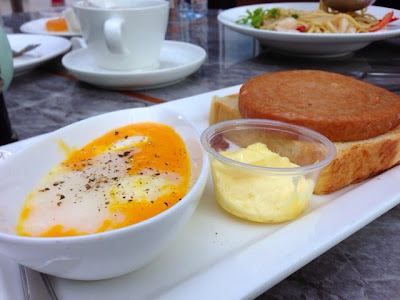 You may have been to Ya Kun, Coffee & Toast or other local coffee joints to have the typical kaya butter toast with runny eggs. Why not try this dish - Kopitiam Works instead? This dish was very similar to the ones offered by the traditional coffee joints but they were prepared differently. Served in sous vide kampong (village) eggs, the dish came with grilled luncheon ham steak (or SPAM), homemade butter brioche and caramel kaya.Although the ingredients looked rather simple, it was the way it was presented that attracted me. The eggs were perfectly cooked about 80 percent cooked. When mixed with pepper and soy sauce (if you can find it), I think it was heavenly. The homemade brioche was warm and delicious. The SPAM steak was generous too. Based on presentation, I felt as if I was eating a new dish. In terms of food, I think it was ordinary. However, Kudos to Food for Thought of thinking such a nice way to present such an ordinary local food. (Food rating: 3/5) 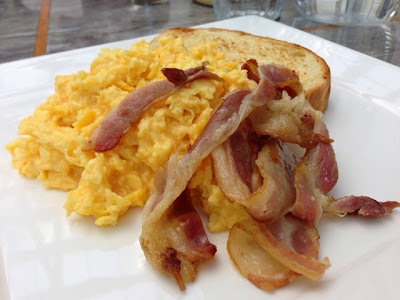 Similar to the American-style breakfast, Basic Works serves scrambled eggs, bacon, homemade butter brioche with caramel kaya. The only difference between the American-style breakfast is that it serves caramel kaya - a local coconut jam. The streaky bacon strips were mouthwatering and the scrambled eggs were perfectly good. If you are a small eater, you should order Basic Works. (Food rating: 3/5) 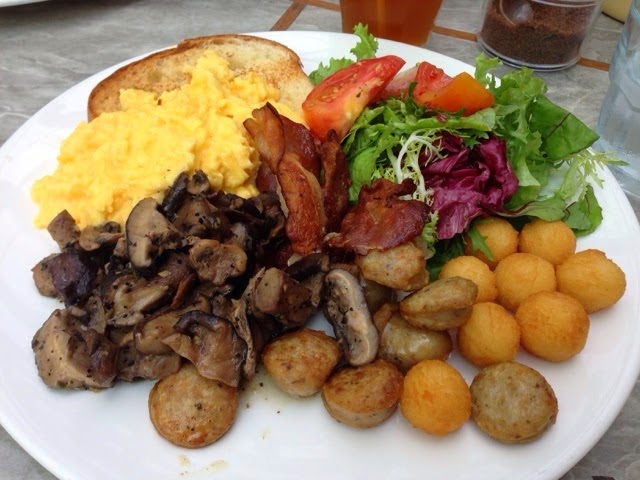 If you are famished, why not order the Full Works? Though we were having afternoon tea, I felt as if we were having a full meal. The food variety was so interesting that we could not help but order more food. By the time we were done with the food, we had to skip dinner and supper altogether. Full works comprises Basic Works with hash brown balls, chicken sausages, garlic mushrooms and torch ginger-coriandaer salad. This dish could be a full meal as the serving was huge. If we had known, we would have ordered one. I loved the garlic mushrooms best. They were very fragrant. The scrambled eggs were good too. The chicken sausages were delicious. What was a little disappointing was the hash brown balls. They were frozen food. (Food rating: 3/5) 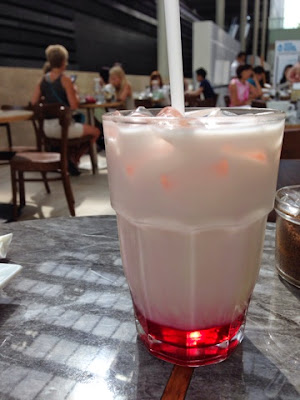 At the beginning of my post, I wrote about the good old bandung drink that amazed me. At this restaurant, they served Ice Rose Bandung Ripple Latte. It comprises of old school T.G.Kiat rose syrup, cold milk and a splash of carnation milk. The drink was delectable. I felt as if I was back in the old days drinking a cold thirst-quenching rose bandung. (Food rating: 3/5)