May 04, 2014
Founded in 1972, Ban Heng Restaurant offers a delectable traditional Teochew and Cantonese cuisine. The restaurant not only uses premium ingredients but also offers gracious service to ensure an enjoyable dining experience for all guests.

After the wonderful experience at Ban Heng @ Orchard Central, we made table reservations for the birthday celebration. We were very excited as we invited our relatives to join us.

By 7pm, the restaurant was already crowded with people. Most of them seated at the main hall were having the ala carte dinner buffet whereas we were having a dinner set menu. The staff were very busy and everyone was trying to grab their attention for food ordering. The guests and I were seated in a private room as highly advised by the staff when we called to make the table reservation. I thought it was an absolutely good choice. When all the guests arrived, I informed the staff to start serving the food.

After a good 30-40 minutes, the longevity buns were finally served. After the first dish was served, the rest of the dishes followed.

Apart from the initial bad experience, the rest of the time was okay. I concluded that I would not host another dinner celebration when there was a buffet promotions going on. The crowd was too many for the kitchen crew to handle. I hope that my guests had a great dining experience at the end of the day. But I was not. 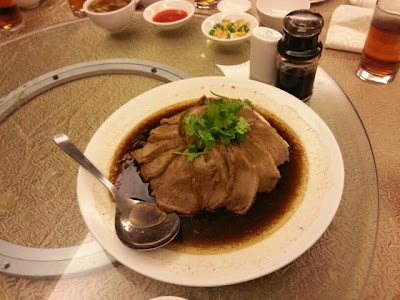 Goose meat is one of the notable dishes in the Teochew cuisine. We had Braised Sliced Goose Meat in Teochew Style (鸿运卤鹅片). To my surprise, the meat was very tender and juicy. The sauce was light and herbal. The firm beancurd slices (or Tau Kwa) placed under the goose meat were very well braised and each slice had the nice aromatic fragrance. Even though the dish came with a special dipping sauce, you can just eat it on its own. At that time, the only thing that was missing was a bowl of delicious white rice to accompany the goose meat and beancurd. (Food rating: 4/5) 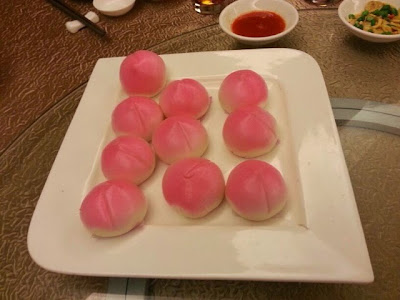 Longevity Birthday Buns (寿比南山寿桃) was not surprise. The steamed peach-shaped buns was filled with lotus paste. I thought it would be better if they could improve on the presentation. For instance, having a big peach bun accompanying the smaller ones at the sides. The steamed buns were soft and fluffy. It looked as it were commercially produced not made in-house. (Food rating: 2.5/5) 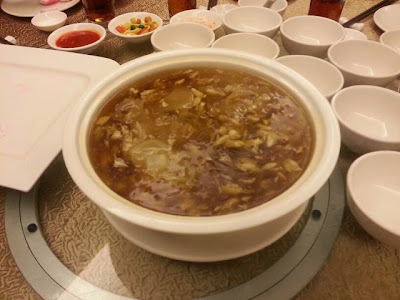 When the soup - Braised Superior Shark's Fin with Dried Scallop and Crab Meat (红烧勾仔翅) was served, everyone slurped as they drank the soup. The thick soup was filled with premium ingredients like strips of shark fins, crab meat, and dried scallops. By adding pepper and/ or vinegar, the nice aroma of the soup was enhanced. (Food rating: 4/5) 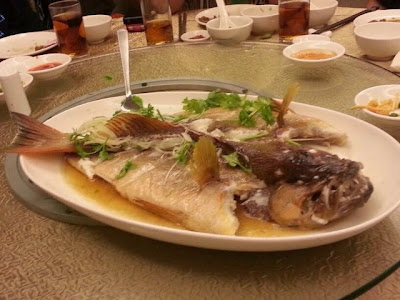 Steamed Red Garoupa with Superior Soya Sauce in Hong Kong Style (港蒸活红斑) was a huge fish. The fish was freshly prepared and the entire fish did not have any fishy smell or taste. We even tried the meat near the belly and there was no fishy smell or taste. The meat was firm and tender. The light and flavourful sauce was a delight. There was a clean skeleton left on the plate at the end of the meal. (Food rating: 4/5) 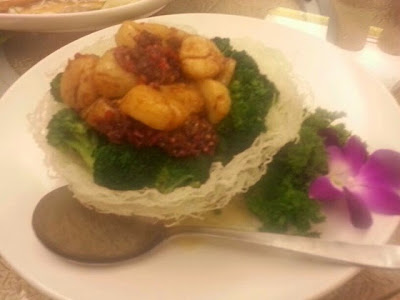 Fresh Scallops and Vegetables with XO Sauce in Nest (XO雀巢绿玉带) was a simple, non-spicy dish. The XO sauce was non-spicy. The scallops were fresh but it was halved. This dish was rather normal as it was served in many other restaurants. (Food rating: 2.5/5) 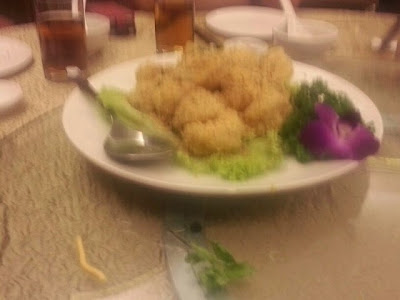 One of the key highlights of the dinner was the Crispy Fried Prawns with Cereal and Butter (奶油麦片虾球). The prawns were very fresh and crunchy. At each bite, I could feel the juice seeping out into my mouth. The cereal and butter mix were heavenly. All of us could not help putting spoonfuls of the mix into our mouths and munched. It was indescribable. (Food rating: 4.5/5) 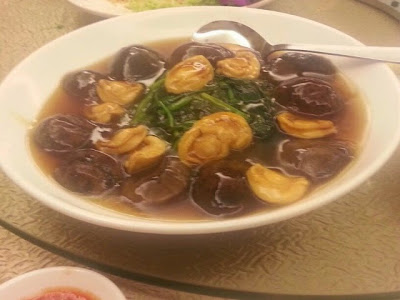 Braised Sliced Abalone with Chinese Mushrooms (鲍片烩花菇) was normal as served in most Chinese restaurants. The mushrooms and abalones were soft and juicy. The Chinese Spinach was soft but there was a little bitter aftertaste. The abalone sauce was nice but a little salty to my taste. (Food rating: 3/5) 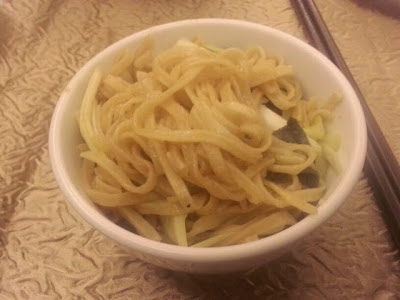 Longevity Birthday Ee-fu Noodles (长寿伊面), which also symbolizes longevity, was not forgotten. This is usually consumed together with the longevity buns during traditional birthday celebrations. The noodles had simple ingredients like mushrooms and leeks. (Food rating: 3/5) 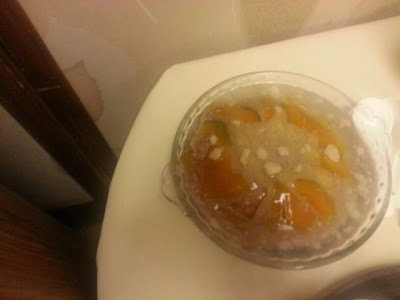 Sweetened Yam Paste with Pumpkin (金瓜芋泥) was ordinary. It is always good to end good things with something sweet. (Food rating: 2.5/5)