Recently, I watched a food programme, promoting the Korean Army Stew or Budae Jjigae. The Korean Army Stew was originated after the Korean War where food was scarce. People made use of the food surplus like sausages, ham or spam (luncheon meat) from the US Forces Korean base camps to create this sumptuous dish. It is still a popular dish today. The stew in the programme gave me a lasting impression and craved to try the supposedly delicious hot pot.

We were supposed to go to another Korean restaurant at the shopping mall but it was closed. Luckily we managed to find Nolboo Hangari Galbi in the same mall. At that time, the restaurant was introducing their new menu which included the Army Stew. Without much thought, I asked for a table and ordered the food.

Nolboo is a popular Korean chain with close to 680 restaurants in Korea and across Asia in China, Japan and Singapore. Nolboo Hangari Galbi at Orchard Central is the first of Nolboo's BBQ outlets in Singapore.

The total dining experience cost us (2 pax) around SGD70.00 which was too pricey for what it was worth. The experience was unforgettably poor and we skipped the dessert. 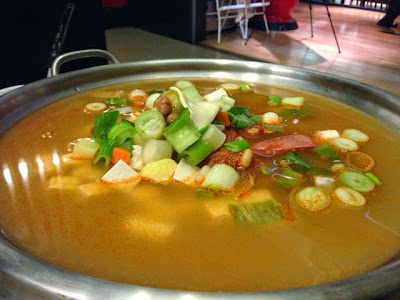 The Korean Army Stew or Budae Jjigae was served in a big broad shallow pot. The ingredients included firm beancurd, elbow macaroni, rice cakes, hot dogs, spam, ham and spicy paste. The hot pot was then garnished with big spring onions or leeks. Then, the server helped to pour the stock into the pot and turn on the fire to boil. There was a dry ramen (instant noodle) to put into the pot later.  We dug in as soon as the pot began to boil. Our first impression of the hot pot was it was too expensive of what it is worth. The cost of the hot pot was around SGD39.00. Then, the ingredients and taste did not justify the cost of the pot. It was flavourless except spicy. Rather, the Shin Ram-yun (a South Korean brand of instant noodle) tasted better than the hot pot. A popular food chain like Nolboo Hangari Galbi would have done better. (Food rating: 1.5/5) 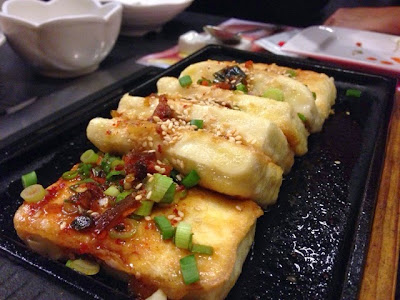 Tofu is a commonly dish in the Korean cuisine. However, the tofu pancake, which should be their traditional Korean food, was inferior. The tofu pancake when served on a hot plate was cold. The egg crust covering the brick-like tofu was soggy. Though it was sizzled with their homemade sauce and garnished with sesame seeds and spring onions, the tofu was both bland and salty. The tofu was bland and the sauce was very salty. We stopped eating after our first piece. This dish was around SGD14.00. I would rather ordered myself a hot plate tofu from a local zi char (煮炒) or chinese cooked food stall. (Food rating: 1.5/5)
Apart from the two main dishes we ordered, the meal includes the six sides dishes. These side dishes were more delectably delicious than the main dishes. 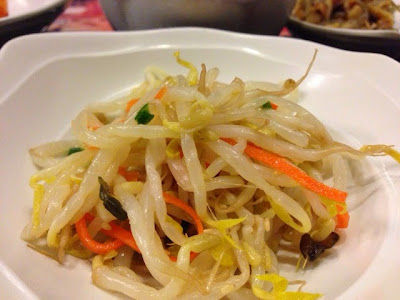 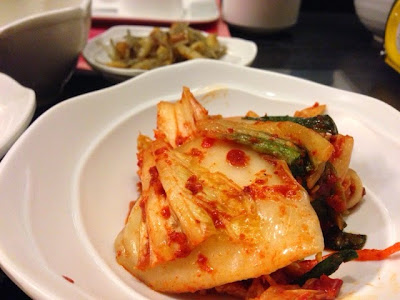 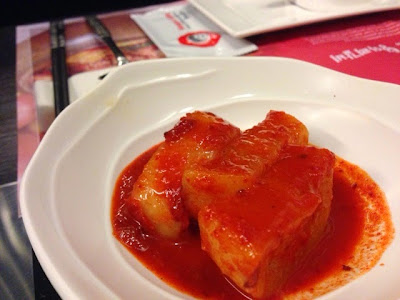 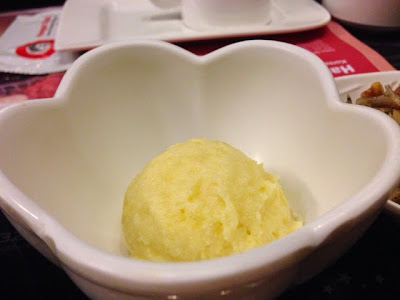 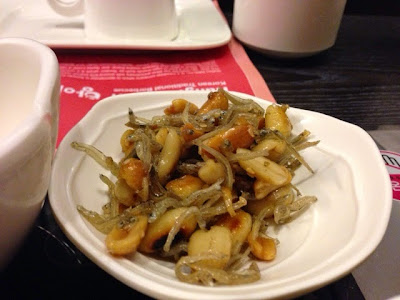 Side Dish #5: Anchovies with peanuts 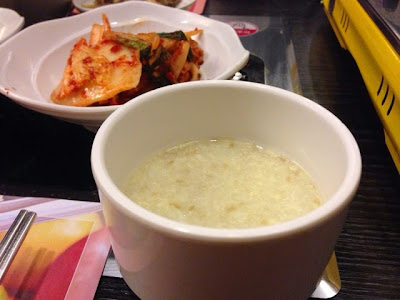