Mother's Day is a celebration honouring mothers, motherhood, single fathers wearing double hats as mothers, and maternal bonds. In Singapore, we celebrate Mother's Day on the second Sunday of the month of May. This year, Mother's Day falls on 12 May 2013.

Enclave in the heart of Esplanade, Loola's is a spacious and casual dining restaurant that serves a sophisticated menu. Coupled with local produce or an Asian flavour, the European technique and presentation enhanced the cuisine that represented our roots. My siblings and I brought my mother to Loola's by awfully chocolate at the Esplanade - Theatres on the Bay.

We ordered a variety of food and desserts to share. We enjoyed the company and the food. This place was conducive for gatherings. I believe that that night view of the Marina Promenade would be romantic and beautiful. However, I feel that it might not be conducive for kids because the menu did not have kids' menu.

The Scallops and Sheets (see photo above) was served first. It was seared scallops, salted egg emulsion, pasta sheet, pecorino, and ricotta. Pecorino was from a family of hard Italian cheeses made from ewe's milk. Ricotto was another Italian whey cheese. The scallops and sheets dish was very interesting. I liked the crispy pasta sheet and perfectly cooked seared scallops. Eating a slice of pasta topped with the seared scallops, salted egg emulsion and cheese was very delicious. I could taste a little sweetness in the scallops. (Food Rating: 3.5/5) 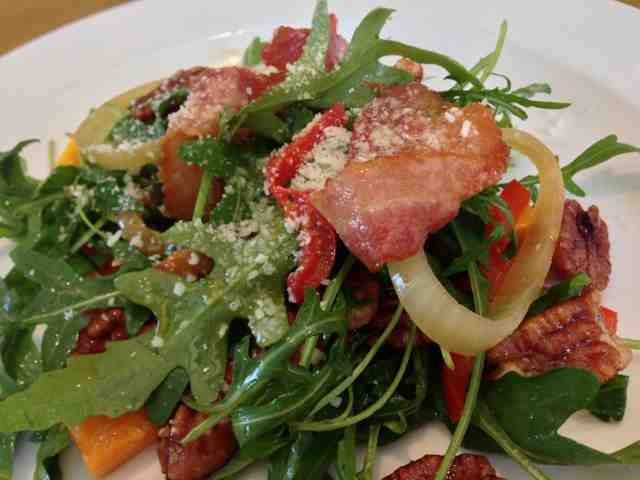 Loola's salad was served with roasted squash, bell peppers, baked honey pecans, rocket, parmesan cheese, crispy bacon, cider and herb dressing. The salad has a twist to it that I was not able to describe. The cider enhanced the flavour that somewhat whetted our appetite. I could say, it was nice. After tasting the soup, my mother was inspired and wanted to make pumpkin soup next time. (Food Rating: 2.5/5) 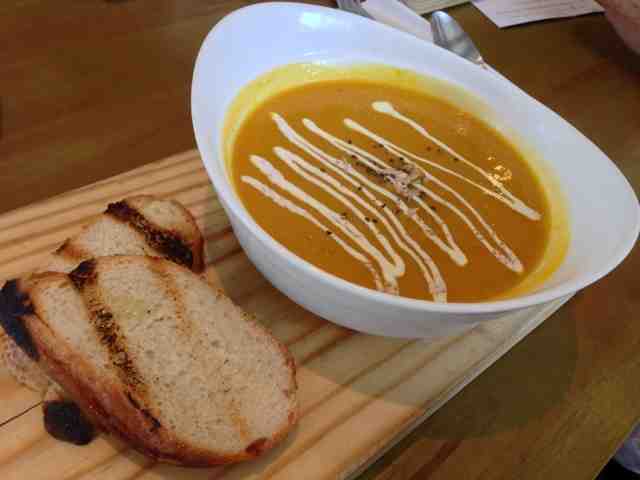 When the Spiced Pumpkin Soup arrived, we could smell the nice fragrance of the soup. Made with roasted pumpkin and middle eastern spices, it gave a spicy twist to the sweet pumpkin soup. It was a subtle curry flavour in the soup. Dipping the grilled bread with a tint of olive oil into the soup was a good choice. It was delicious. (Food Rating: 3.5/5) 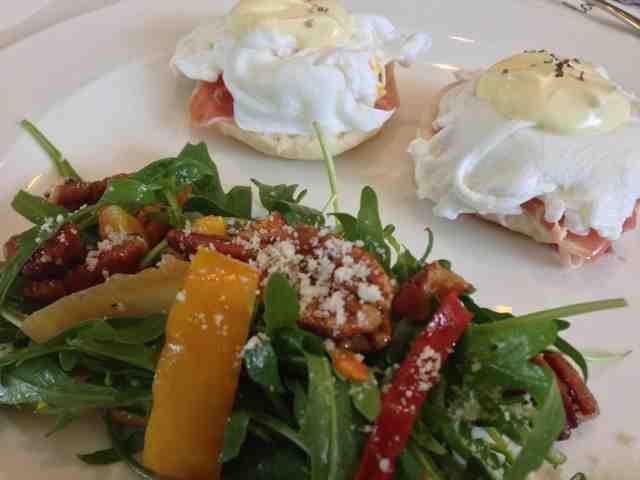 Loola's Egg Benedict was made with poached eggs, serrano ham, Loola's bun and wild rocket salad. After watching a food show featuring eggs benedict in Channel TLC last night, I had been thinking of having poached eggs since. Coincidentally, Loola's has a brunch menu. I ordered a Loola's Egg Benedict without hesitation. When it was served, I was excited to have the first bite. I was disappointed. Most poached eggs that I had eaten in other restaurants were served hot, but I was served with cold poached eggs at Loola's instead. Somehow, this was the dish I enjoyed the least. (Food Rating: 2/5) 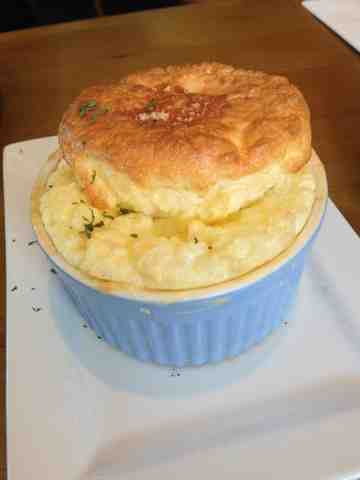 This was an interesting starter - Crab Cheese Souffle. The crab meat lied at the bottom of the ramekin (glass/ porcelain bowls) was topped with cheese souffle. The souffle was fluffy and soft. I thought I was having marshmallows. It was delicious. The crab meat was fresh and sweet. It was a good starter to order. (Food Rating: 4/5) 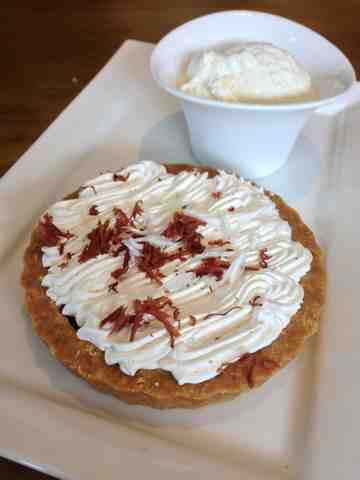 After the entrees, we asked for the menu again. This time, we ordered three desserts. The Banofee Tart, made with caramelised bananas, browned butter, and custard, was served with vanilla ice cream. I liked the tart crust. It was nice. The caramelised banana had a puree texture. Overall, the dessert was heavenly and not too sweet. The sweetness was just nice. (Food Rating: 3.5/5) 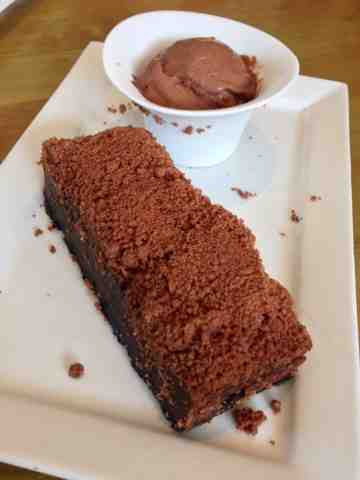 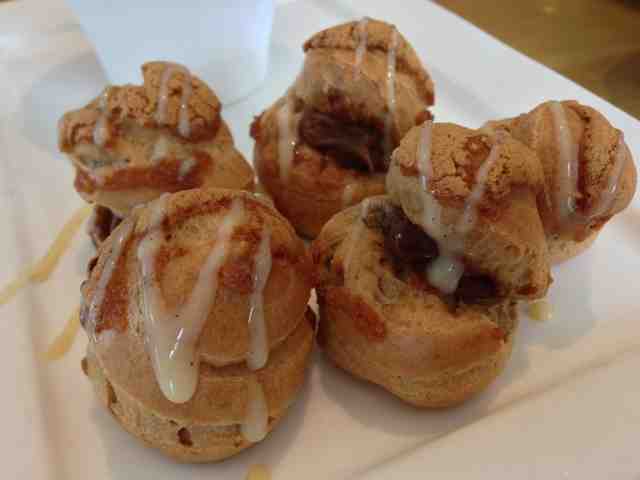 Recommended by one of the staff, we ordered the Mocha Poppers. A house styled choux pastry with mocha chocolate custard, crunchy topping was served vanilla ice cream. This mini poppers tasted like Bread Papa's choux pastry. I liked the custard as it was very rich. Overall, the dessert was nice. (Food Rating: 3/5) 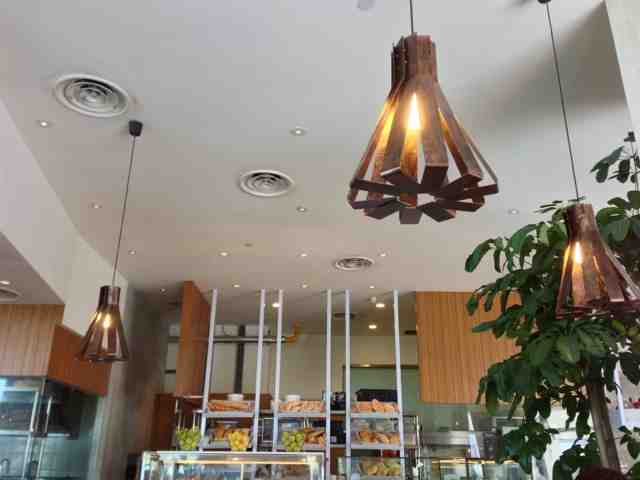