Under the umbrella of the Nippon Restaurant System, Inc, Hoshino Coffee opened its first international outlet in Singapore at the New Plaza Singapura. Renowned for its hand dripped coffee, the restaurant also served desserts and entrees. Most blogs I read recommended the Specialty Souffle Pancakes. However, I had tried  to dine at the cafe many times but the queue lines were always long.

After watching a movie at Plaza Singapura, we decided to check out Hoshino Cafe again. This time, there were fewer people queuing. Since there were only the two of us, getting a table was much faster.

When we looked at the menu, we wanted to try everything. On the table, there was a mechanism which we could press for service. So, we pressed the button on the table for service. We waited for a couple of minutes but no one came. I pressed again and again. After three tries, I was still not served. So, I raised my hand to attract any staff's attention. Finally, I was served by a staff. We made our orders. Suddenly, food were served very quickly. First was the beverages - Ice Cafe Latte and Royal Milk Tea, followed by the Toast with Special Ogura Bean Paste, and then Fuwa - Fuwa. By this time, our table was already crowded with the two beverages and the red bean paste toast. Afraid that we might not be able to place another dish when served, we ate very fast.

While waiting for the food to be served, I made an observation on its service quality.  Several bloggers praised Hoshino Cafe for its high service quality. One even shared how the staff remembered their orders and asked if they would like to have their dessert served after they finished their mains. However, I did not experience that. Now that the cafe was doing very extremely well with neverending lines, they might not cope with the multiple orders and high customer turnover. Overall, the service was still generally good. However, I was expecting better after reading from the various bloggers. 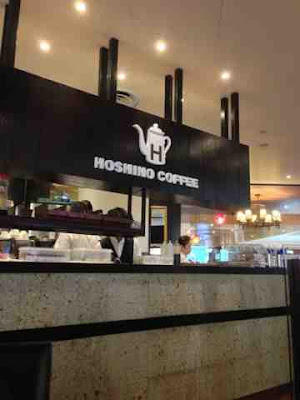 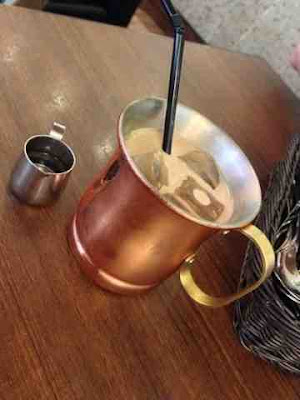 Hoshino Coffee was apparently popular for its hand drip coffee and we ordered a mug of Iced Cafe Latte. We looked forward to taste any difference between a regular iced cafe latte and a hand dripped iced cafe latte. When the beverage arrived, we put the coffee to a test. I took the first sip. Somehow, I could not taste the difference. Either I was not a coffee connoisseur or the hand dripping method was just technique, I surely could not taste any difference between a hand dripped coffee and a regular coffee. Nevertheless, the coffee still tasted nice. Actually, I was looking forward for the barista to perform the hand dripping technique behind the counter. But I could not see him prepare from my seat. What a pity. (Food Rating: 2.5/5) 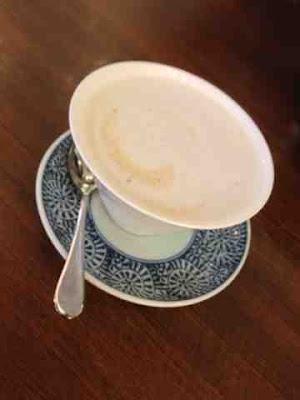 I also ordered a Royal Milk Tea. Interestingly, the cup of tea did not have a handle. I felt as if I was drinking from a bowl. As for the beverage, I thought I tasted a tint of green tea with milk. It was light and nice. (Food Rating: 3/5) 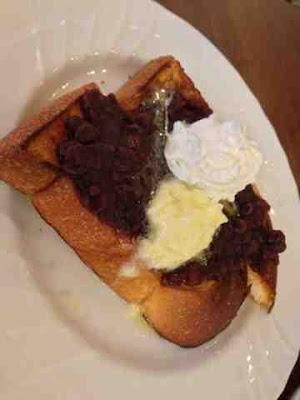 Toast with Specialty Ogura Bean Paste was intriguing. The presentation looked ordinary, yet delicious. At one glance, one should just shrug his shoulders, saying he could also make this simple toast. The nicely toasted bread topped with red bean paste and a little margarine brought out the sweetness and yet some saltiness of the food. I took another bite and this time, I topped it with whipped cream. I could taste sweetness and saltiness too. Really interesting. (Food Rating: 4/5) 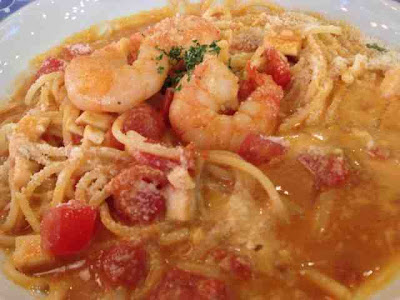 The Lobster Bisque Spaghetti was served in a smooth, creamy and seasoned lobster broth. Though there was no lobster meat in my dish, I presume that the lobster bisque was it. The pasta was perfectly cooked in al dente way. The prawns were crisp and fresh. It tasted great. After multiple mouthfuls, I felt queasy and the dish become increasingly salty. The pasta would be best shared with at least two persons. Overall, it was normal and nothing to rave about. (Food Rating: 3/5) 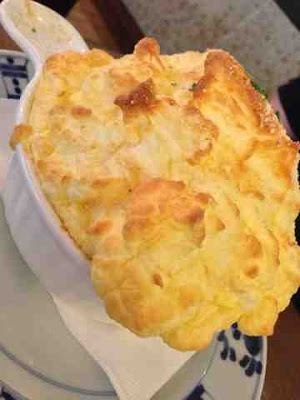 "Fuwa-Fuwa" (fluffy) Hoshino Souffle came with a huge fluff of cheese souffle on the top of the ramekin. The fluff of cloud was huge that it became a little too much. Both of us felt queasy very quickly. Once again, the dish became increasingly salty after many mouthfuls. At the bottom of the ramekin, was cheese baked rice. The rice was nice but nothing to rave about. (Food Rating: 2.5/5) 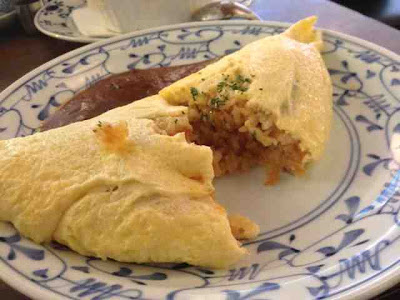 Demi-Glace Omu Rice, served with tomato rice wrapped with egg and sauce on the side, looked rather simple. At first few bites, it tasted good. But after some time, the queasiness set in again. It became increasingly salty after many mouthfuls. All the above dishes tasted great and we enjoyed it. However, was it because of our lightly salted lifestyle that made us feel the dishes were salty? I could not make out of it. Overall, it was nothing to rave about. (Food Rating: 3/5) 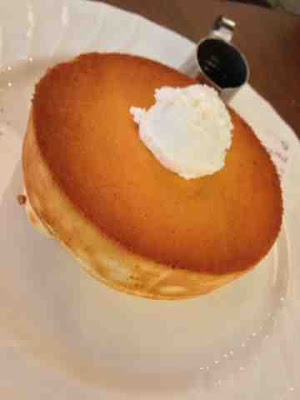 Always end with a sweet tone. Because the Pancake Styled Souffle was highly recommended by many food bloggers, we decided to give it a try. The dessert took 15-20 minutes to prepare. We drizzled the souffle with maple syrup. We took a bite on the plain pancake and we thought of sponge cake immediately. The pancake was fluffy. The outer crust was crispy whilst the inner part of the cake was soft and smooth. Then, we cut a slice topped with whipped cream and syrup. It complemented well. (Food Rating: 3/5)